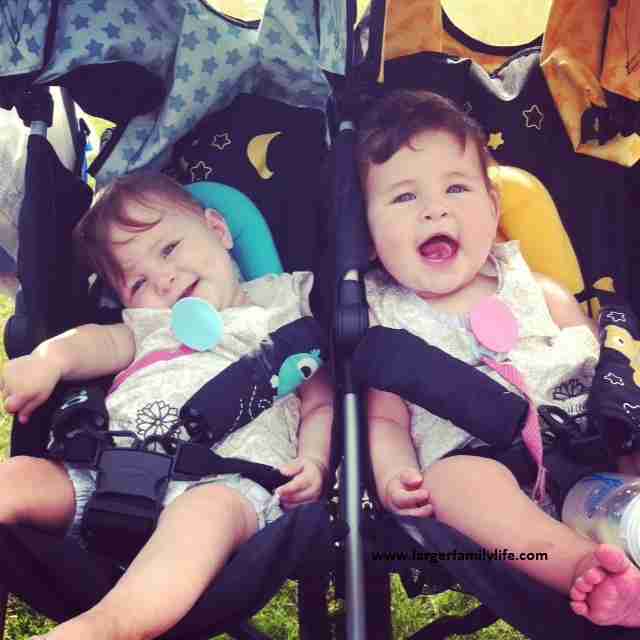 We have often marvelled at how different they are.  We’ve commented many times on how they barely look like sisters, let alone twins.

Anna, on the left in the picture above, was born the smaller of the two at 5lbs 2oz.  Libby, born a minute before Anna, weighed in at a grand old 5lbs 12 oz.  As my consultant put it – she looked ‘hefty’ compared to Anna.  Or as hefty as a five pound baby could ever be, I guess!

Libby was born with darker hair and Anna’s lighter.  This hasn’t changed although they are now both sporting more of it.

When they were younger babies Anna was the more content of the two.  They have since swapped roles.  Libby is happy and content much of the time whilst Anna is quick to let you know when she wants something.  Which is quite often.

Libby is a little performer, loving to sing and dance away.  She’s already saying several words including Dada, Ben, bounce-bounce-bounce (whilst bouncing away in the Jumperoo), hi, oh-oh and Batman.

Anna is still spluttering and gurgling albeit with a lot of enthusiasm.

Libby is trying her hardest to crawl now.  She’s managing to get onto her hands and knees and is now doing the old baby-revving thing. She’s still trying to work out how to propel herself forward although she’s recently managed to transport herself in reverse.

Anna is still relying on rolling herself around the room.

Both of them can end up moving themselves from room to room in the bat of an eye despite not being able to walk or crawl.  Normally in different rooms at the same time.

Anna has been super grumpy lately which could be down to the seven – almost eight – teeth that she has cut.  She likes to show them off too with some kind of granny-gurning grin thing that she does.

Libby has cut two top teeth and that’s about it.

Both girls have a knack of wrapping Daddy around their little fingers.  For such small people to have such great power is a joy to watch.

In fact at the moment they seem to melt everybody’s hearts.

Can you believe it?

3 thoughts on “Twins – but so different!”