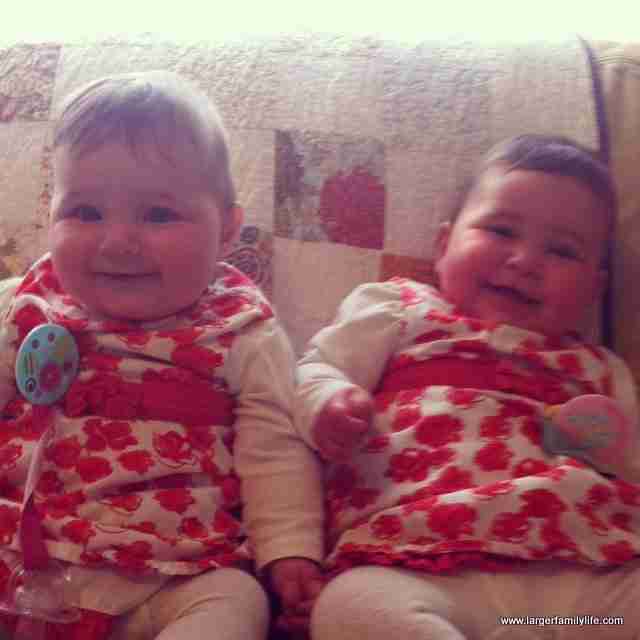 Can you believe that the twins are two days away from turning seven months old?

I cannot believe that this time last year we were anxiously anticipating their arrival.  We were fairly new to the news that there were two babies and not the one we had expected there to be and were excited at what lay ahead.  This time last year I was pregnant with twins.  It seems so long ago already.

Seven months into parenting twins I can tell you this.

As sweet as it is, as much of an honour as it is, as wonderful as it is… it is also so very, very tiring sometimes.

Anna (left in the photo) and Libby are teething.  Anna has cut two bottom teeth.  Libby is still waiting for hers.

Some days are bordering on desperation with the tiredness.  You feel you can quite easily sleep through anything given the chance.  Some days when I’m being shaken awake by Mike who is already attending to one screaming baby, it’s clear I have managed to sleep through deafening yells and not even stirred.

The bleary-eyed feeling won’t go away with coffee and remains through the day.  By 2pm I am ready for bed.  Unfortunately the rest of the household isn’t.

Sleep deprivation truly has to be one of the toughest parts of parenting, hasn’t it?  Night after night, it will take its toll until several nights later I fall into bed exhausted and oblivious to anything around me.  In fact, I often just sit down on the sofa to watch a DVD with the children and fall asleep within five minutes.

And since I am quite certain that they are enjoying this teething lark even less than I am I’m hoping, willing and praying they’ll be out of their misery with it very soon.

If you are feeling nostalgic or if you haven’t yet done so but would like to you can read our entire twin pregnancy diary on this site.  Oh, and it’s the real-life, true and as it happened version as opposed to the highly dramatised and completely inaccurate Channel 4 “15 Kids and Counting” version *rolls eyes*.

2 thoughts on “The Trouble With Twins”