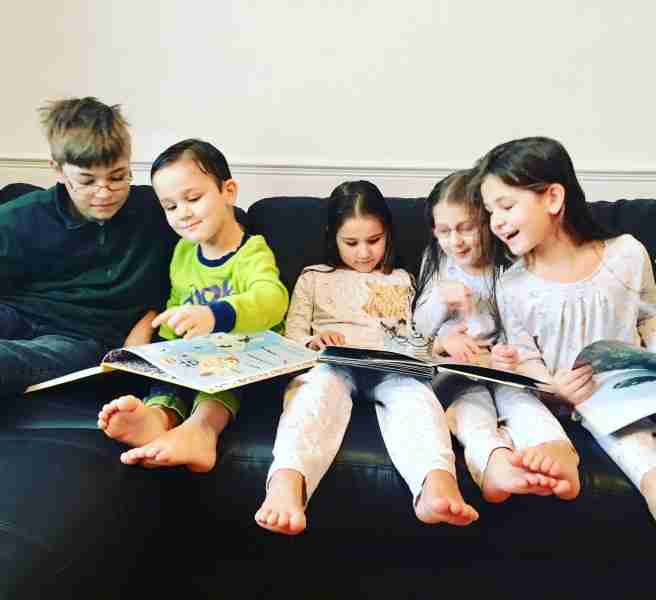 Our family lives firmly by the motto that you can never have too many books, just not enough time to read them in. (Use this Barnes and Noble coupon code to start building your own library). We have now also reached the stage whereby it isn’t just an issue of time, but also bookshelves, general storage space (Mike has even put up shelves in the loft), and facing up to the realisation that you have visited the local branch of ‘The Works’ so many times that you have their personal numbers on your mobile phone in case you need to call or text over a book order, and that’s just not normal. I’m not even kidding.

As a child, I was a voracious reader. With a mother that didn’t want me around more than she felt she needed to put up with me, and with a very large age gap between me and my only sibling, I spent a lot of time in my room with a book.

I believe that books, like songs, invoke memories. One book I distinctly remember was the only book my mother had owned but one I had never seen her read. It was a light brown hardback with bold black lettering on the spine. I can’t quite remember the title but recall it had characters by the name of Priestley and his friends who had gardeners and staff and threw dinner parties. The book was made up of several hundred pages which set out various scenarios of Priestley et al, in an attempt to explain the rules and grammar of the English language. An odd choice of reading for a little child who lined up her teddies so that she could read to them as if she were appearing on television Jackanory-style indeed, but one which undoubtedly helped me to learn the language that wasn’t my first or even my second, a language I didn’t begin speaking until I was 3-years-old.

Other books I loved were Nina Bawden’s The Peppermint Pig, which made me cry every single time I ever read it – and I read it a lot. Another was the story of Heidi, which left me imagining my bed was tucked away high up in a hay loft, with a tiny window beside it that overlooked fields speckled with goats that grazed under clear night skies as the stars twinkled away by my window.

My mum never read to us as children. My dad would do so occasionally, making it fun with amusing character voices and exaggerated narration, but he was more of a improvisatory storyteller. His forte lay in telling a story and telling it well and humourously, but spontaneously. There was no such thing as a bedtime story for us, unless we read it ourselves.

When my children were born, encouraging a love of books was not something I consciously made a decision to do. It was a natural development borne of my own inability to pass a book by without skimming it, reading it, buying it or immersing myself into it. As a result, my two oldest children, despite having very little else when they were young, always had a supply of books accessible to them.

I read to them from the time they were born. We would make theatres out of cereal boxes and old clothes and create puppet shows that would bring characters to life.

And there were always bedtime stories.

The Book Trust launches its Bath, Book, Bed campaign this week in an effort to help knackered parents settle their children more easily. The theory that Supernanny Jo Frost and Daddy Pig of Peppa Pig fame have teamed together to provide, is that a warm, relaxing bath, followed by a peaceful bedtime story or two will result in your little one nestling into their duvet cocoons and heading off to the land of nod without a peep.

I guess it does make better sense to have the gradual wind-down at the end of the day rather than a sudden change from high-stimulation and activity to expecting them to fall into a contented, happy slumber. I am sure this works for many parents, and if it does for you, I doff my virtual hat to you.

Personally, I don’t remember my older children ever being fooled by this routine. I did, however, find them getting up to mischief after they had been tucked up on several occasions. Other times, I found them being complete devils when they should have been asleep. Like the time they poured bucket after bucket of water over their bedroom carpet. The reason that Stephanie gave me was that the carpet was blue and they wanted to make it into the sea. Ben reassured me that it was all Steph’s idea and all Steph’s fault and nothing to do with him.

As the family grew, so did our collection of books. But the logistics of the ever-growing family needed to be constantly adapted and adjusted. As the young children became the older children and more children joined our family, the bath, book and bed routine that the older ones had known soon become forgotten. Bathing so many children is a time-consuming effort in itself, especially at the time when we had six children under seven.

I have often considered creating a sheep-dip contraption that deals with the process of bathing several young children as bathtimes were very much a case of one in… one out… next one in… It still is, although the number of children I’m having to carry this process out with is finally decreasing thanks to them moving into the stage of self-hygiene or, to put it more accurately, soap-dodging and claiming they’ve bathed or showered when they haven’t.

Having so many people in one house and only two bathrooms also means we need to make use of the rooms when we are able to. This, along with trying to fit everything around everyone’s commitments, timetables, clubs and general to-ings and fro-ings, means that showers and baths are taken throughout the day rather than just limited to evenings. Generally now, I find it easier and more practical to bath the younger children earlier in the day than the evenings. Stories are read through the day regardless, usually with everyone piled on the sofa or gathered together in the living room.

Much as I would sometimes like to bring bedtimes forward and pack them back off to bed at 11am after a daytime bath, I suspect they would not oblige me enough to settle themselves down to sleep. Hell, they don’t oblige me to settle down to sleep when it is their bedtimes. Instead, they normally grace us with a safari experience, mimicking a herd of baby elephants as they stampede from bedroom to bathroom because their bladders inexplicably shrink to the point of needing to wee every 4 minutes and 32 seconds. This inconvenience is likely triggered by the other inexplicable phenomenon that only kicks in at bedtime: the constant and dire thirst that they suddenly suffer from, requiring several trips downstairs to get ‘one more drink.’ Increasingly puzzling to me is how this particular ailment is accompanied by the lack of ability to drink down water normally. There must be something about bedtime hours that strips them of their ability to gulp any liquids and to only be able to take the smallest, teeniest, barest of sips instead. Several times over. Anyway, to mark the third year of The Book Trust’s Bath, Book, Bed campaign, we’ve teamed up with them to give away one fabulous goody bag packed with the following prizes:
1x Peppa Pig Book

To enter to win just leave a short comment telling us your favourite childhood book and the memories it invokes that make it your favourite.

The closing date of the competition is 30th April at midnight. UK entries only please.