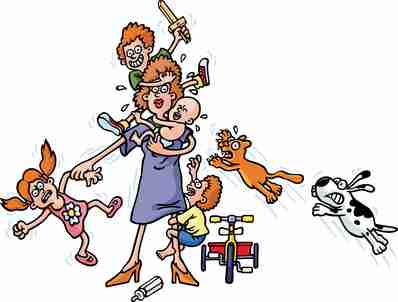 Twas the hour before bedtime and all through the house,

All the creatures were stirring, except for the mouse.

The rodent, you see, packed his bags, quickly fled,

To escape all the stress since the kids rose from bed.

The children awoke from their sleep one by one,

Not quietly no, but a thundering drum,

Of footsteps which boomed as they ran down the stairs,

And into the kitchen to fight over chairs.

‘Who finished the cereal? I didn’t get any!’

As one toddler fidgets around on her seat,

And creates a mess as she learns how to eat,

The cereal falls with a crash on the floor,

And the milk spills upon the pyjamas she wore.

Don’t cry over spilt milk a person once quote,

This person was childless no doubt, I would note.

Because if they weren’t they would know all too well,

The several times daily occurrence of drinks that would fell.

Not crying is difficult, when mopping up splatters,

For the fifth time in as many minutes, it matters.

When you’ve already been up for a reasonable time,

With breakfast time over the day can’t get worse?

It’s not only first but it’s never-ending.

Between this child then that one, my ears won’t stop bending.

I start on the housework, the place is a mess

‘Can you pick up these things? I ask them. The distress!

The protests continue with whining and gnashing

Of teeth as small faces turn red, with arms thrashing.

Okay then, I tell them, ignoring their pouts.

I remind them it’s only two days till the bin men,

Arrive to take all of their uncared for toys with them.

How I wish children came with adjustable sound.

With toys put away, it’s time for the lessons

‘It’s not time to doodle! Get on!’ He begins

It isn’t the younger ones which cause all the stress

The older ones do it too, older doesn’t mean less

Of the worry, the wonder, the ‘are they alright?’

Or the phone call you get in the dark of the night.

The opening line when you answer starts ‘Sorry!

I don’t want to call you this late but don’t worry.

How are you?’ they ask – are they being funny?

No but of course, they’ve run out of money.

Parenting isn’t the easy way out,

A lifestyle choice isn’t what it’s about.

You love them with all of your heart, yes of course

But some days are just hard, and some others are worse.

If there is a parent who says otherwise,

Because parenting isn’t as easy as that.

Some days are just stressful. That is a fact.

The experts who tell you what you’re not doing right

Really don’t count a fig for opinions they cite.

I take consolation in knowing one day,

They’ll have kids of their own. Then we’ll see what they say!

So to all of the parents who get under the weather,

When days leave you gripping the end of your tether,

There’s an army of us – we’re all parenting clones.

We all do our best, step by step, day by day,

But we’re only human, what more can I say?

We can’t be perfect, but nobody is.

It’s only natural you’ll have days in a tizz.

In the hour after bedtime, when all through the house

You pass room to room, as quiet as a mouse,

You remember the anguish, the fights, the day’s sorrow.

And get ready to do it all over tomorrow.

But listening close to their dreamy sighs,

You wish for more patience, and most to be wise,

Because though it’s not easy, a stroll it is not.

These days will be over, and almost forgot.

Hold onto the better ones, don’t sweat the bad

We’ve all got a mixture, some happy, some sad.

It’s real and it’s honest and sometimes we fail.

It doesn’t make us bad, it just means we’re real.

We get tired and frustrated, we react as we feel.

If you’ve counted down minutes til bedtime arrived,

Don’t feel guilty, you won’t be the only one who’s sighed

With relief at the end of a harrowing day.

When refereeing mostly took over from play.

Put the kettle on – maybe pour something more strong

And raise your glass to us all, for these days won’t last long.