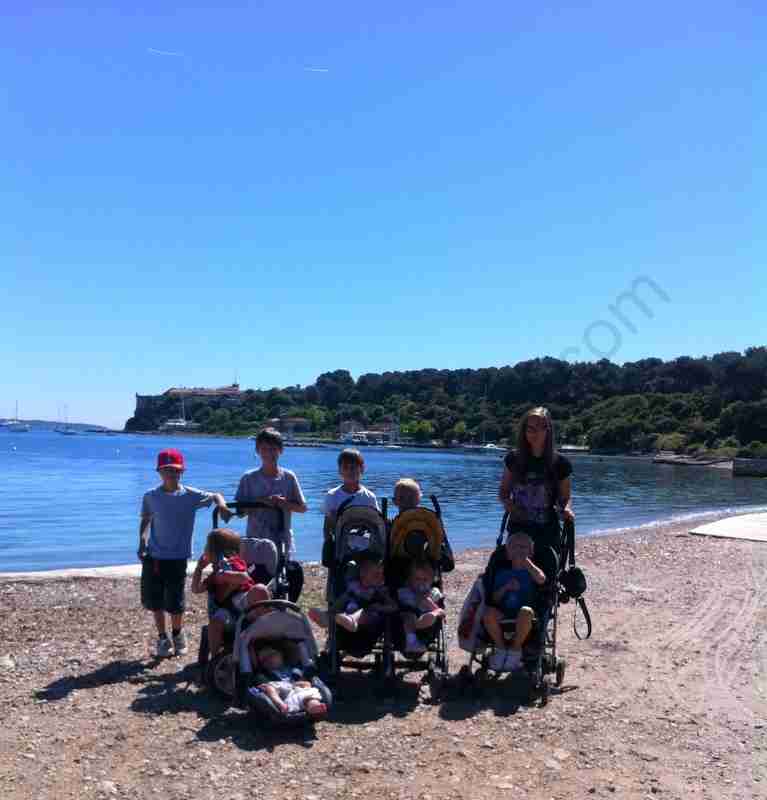 Before we set off on our trip we were feeling quite anxious.

Nine weeks travelling through two different countries, from one place to another, was a long time after all.

Nine weeks travelling a 3000 mile round trip with ten children, nine of whom would be under 10 years of age, surely had to be bordering on insanity?

As we pulled away from our driveway two months ago and waited in the snow at the Eurotunnel in England, Mike and I agreed that this trip could go either way; either we would love it and want to do more or it would put us off travelling completely.

We are now coming into the last week of our journey.  On one hand the day we left seems like a distant memory already, yet the last two months have flown by at speed.  It doesn’t seem like we have spent eight weeks away from home but this time away from everything familiar to us has been invaluable in reassessing the things we knew – and the things we thought we knew – on so many different levels.

Stepping out of your comfort zone won’t kill you

Or so I thought.

Mike shares my views on home and on change.  We thought we liked ‘home’ and didn’t like change.  He didn’t miss it either.

We worried about the children being away from home for so long.  Would they pine and whine?  Would they spend the entire trip asking if it was time to go back yet?

Nobody had missed home.  I had expected them to but nobody did.

Of course, we missed Ben and Stephanie.  Keeping in touch via Skype is great but not the same as being able to hug them or see them in the same room.  But that was all.  We had been so engrossed in what we were doing and in where we were at any given time that ‘home’ wasn’t given a second thought.

We didn’t even realise that we had passed the boundaries of our comfort zone and fled far from them.  Does someone’s comfort zone even exist or is it something we’re led to believe we have in order to keep us within certain limits?   All we know is that stepping out of ours didn’t kill us, and it very probably wouldn’t kill you either.

It’s a big world after all

Forget the lie Disney fed you.

It is not a small world.

It’s a very big world.  A very big world.   And it is full of things to discover, places to see and things to do.  Watching them on the Discovery Channel or reading about them in books just doesn’t cut it.  Nothing is the same as seeing somewhere, doing something, experiencing a new place for yourself.

Re-evaluate your life and taste the freedom

We were hit with the realisation fairly early on during our trip that what we had on the bus was pretty much everything we needed.  This led onto a conversation discussing all the ‘stuff’ we had accumulated over the years.

We talked about the things we bought and didn’t use (for long), we talked about the unpacked boxes in the loft from when we moved into our home six years ago and we talked about all that wasted money on things we just don’t need.  We had none of it whilst we travelled yet we were not miserable for not having our mostly forgotten CD collection, or our boxes full of decorative ‘stuff’.  The children were none the worse for not having their vast, over-the-top, heaps of toys which spilled from every available space.

We realised that we didn’t need any of it.  All that consumerism, that marketing behind it, the advertising – we were free from all of it and the liberation from separating ‘wants’ from ‘needs’ felt good!

Too often people work to buy stuff they don’t need in order to live a lifestyle they think they ought to live, but as they do so the boundaries change.  They then work harder to earn more money to buy more stuff they don’t need, and the boundaries move again… and pretty much all they end up doing is working to maintain the lifestyle they think they ought to have.  They get so caught up in the work-more-for-more-stuff mentality that they don’t realise that quantity of stuff might be plentiful, but quality of life is passing them by.

Travelling helps you to reassess the things that matter.  That’s travelling – not holidaying.  When you set off for a longer period of time and are separated from the things you thought matter but find out that they actually don’t, well, you start to think differently about the true value of possessions versus the value of life.  Having lots of shiny, expensive, nice things doesn’t necessarily equate to a good life.

Home is where your family is

Discovering we were far from what we thought was our comfort zone, and away from all our ‘stuff’ back home opened up a new realisation – home was where our family was.  As long as we were together, we were happy.

It is as though the choice is either/or.  Either you have children and give up travelling or you travel and opt out of having a family.

Travelling didn’t mean our family dynamics changed for the worse.  Not being at home didn’t mean we weren’t living a real life.  We were just living life differently, in new places and doing other things.

We were experiencing new places and things together.  We were seeing things for the first time at the same time.  We were making discoveries, having new conversations and finding out new things as a family.

We were making memories together.

Our children won’t stay little forever.  Leaving Ben and Stephanie back in England confirmed that the adults we’ve raised now have lives to live their own way, and adventures of their own to take.  It won’t be long before the rest of the children follow and we know that the time will fly by in the blink of an eye, so why not make memories – big, special and unusual memories – to last?

Children are adaptable, adventurous and resilient

Here is the thing though; children are far more adaptable, adventurous and reslient than we give them credit for.  When we talk about our concerns for them, quite often we’re talking about ourselves – the adults.  We are the ones who worry and wonder and make excuses.

Kids love an adventure.  Perhaps we should take a lesson from them and let go a little?

Let’s make life fun!  Let’s make new places somewhere to discover rather than be wary of!  Let’s embrace new things and new ways without holding onto what we think things and ways ‘should be’ like.   Let us follow their lead once in a while.  We need to see the world with new, fresh eyes, and we might just enjoy it!

You only live once

It’s no secret that Mike and I made the decision a long time ago not to be afraid to be different.

Many people aren’t comfortable with that, whether it’s the having lots of kids thing, or the self-employment thing,  or the home-educating thing.

We’ve seen people we thought were friends sneeringly stating to others how they ‘wouldn’t put anything past that family’ because we live life differently.  That we aren’t afraid to try different things and follow a dream we may have is our choice.  Anybody else’s discomfort at how we live is not our problem.  Our decisions are based on one thing; not having regrets.

Yes, we could live life ‘safely’, at home day after day, sticking to routine and familiarity.  We could work for an employer for a regular income.  We could buy fish’n’chips on a Friday and take the children to the park at the weekends.  We could send the children to school and complain at the cost of uniform and lack of one-on-one time with the pupils.  We could go with the flow.  We could plan for ‘later’, or for ‘one day’.  In the meantime, our lives are passing us by and we’re just living, rather than living life.

And so, our decision to take what we have learnt the last couple of months means that we have decided to travel more…  with the children, of course.

We plan to see places we thought we wouldn’t see, and do things we wouldn’t normally do.  We’re going to work out how many times we can move the boundaries of our comfort zones.   We are going to learn new things and make more discoveries together.  Mike and I have made a pact to show the kids as much as we can, as often as we can.

This won’t be a round-the-world trip in one big gulp, more of a series of smaller, digestible courses.  As long as I can earn on the road we can do it.  Let’s call it one of the benefits of unconventional living.  The flexibility though is priceless.

Our first trip is booked already; whale and dolphin watching for a month or so along the west coast of Ireland from September this year.

Next year we plan to return to Italy, basing ourselves in Padua and taking time to dig down deep into the culture and surroundings for a couple of months, rather than whizzing by it as we did this year.

And our biggest trip is also in the planning; a trip around several states of the USA over three to six months maybe.  We already have plans to visit a few families we know there and are currently trying to work out the logistics of it all.  Any suggestions of must-see places or must-do things?  It’ll be great! All that’s left to think about is booking airport transportation and it’s a go!

There’s a lot of budgeting to be done, a lot of saving and a lot of discipline to pull it off, but we know we can do it.  After all, we only have one life, and we’re planning to live it!


One thought on “Have Kids, Will Travel: Why Having a Large Family Won’t Stop Us Seeing the World”