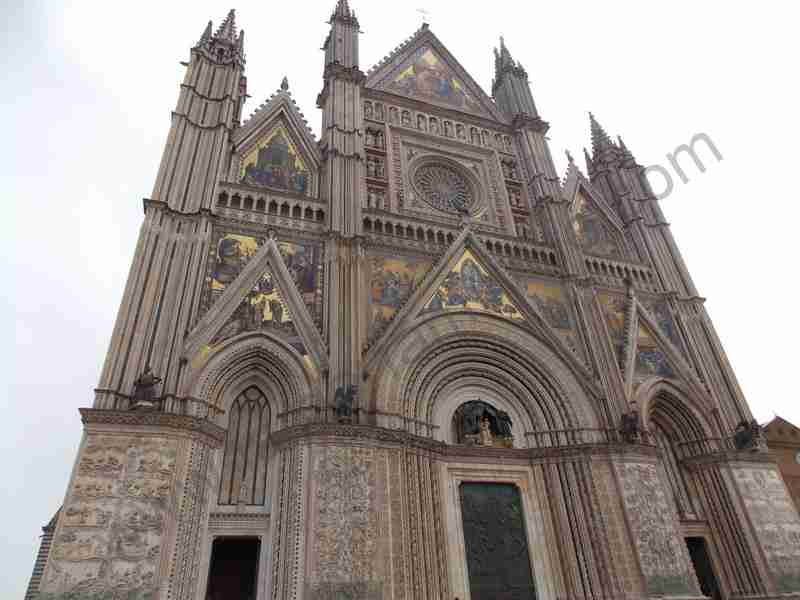 From Padua we travelled down to a tiny area called Sermugnano in the Umbria region of central Italy.

The property we rented was set within the owner’s private estate and was close to the small town of Orvieto, which is set high on vertical cliffs upon a mass of tufa rock.  The defensive walls of the town are also built with this rock consisting of volcanic ash.

Orvieto is a small town of interesting sights and crammed with a fascinating history held within it.  One week wasn’t long enough to visit everything and discover all it had to offer.  We had to miss out on so much, from the 174 feet deep St Patrick’s well to the complicated, labyrinthine network of underground tunnels and caves dug far beneath into the tuff.  Guided tours are available to take you through the mass of cellars and galleries within, housing a secret world where noble families of old could escape when under siege.

The cobbled streets were fairly narrow and, as is the norm for most Italian towns and villages, they would provide access for both cars and pedestrians simultaneously and without boundaries.

The children soon became used to flattening themselves against the walls as soon as the sound of a vehicle was heard, as often they would emerge from around a corner or over a hill at speed.  Locals would seem to almost dare drivers to steer too close, refusing to move out of the way, whilst the drivers had somewhere to go and nobody would stop them.

It was just the way things were.

Even narrower side streets would emerge from the small streets, some through tunnels, which would reveal another cluster of small, simple shops selling local produce and pottery.

We parked the bus by the well and walked into the town – uphill all the way.  Our new activity for our trip was soon labelled ‘extreme buggying’ – pushing the buggies up the innumerable hills we faced proved to be intensive yet effective exercise!

Our first view of the cathedral was when we unwittingly drove straight out of a road and came face-to-face with it as we sought our rental property.  We hadn’t expected to see such a grand, magnificent structure at all, much less in such a relatively small town.

We returned for a more leisurely look a couple of days later and still the magnificence astounded us.

Back in 1263 a miracle is said to have occurred in the town of Bolsena which lies close to Orvieto.  As a result, Pope Urban IV ordered the construction of the cathedral in order to house the Corporal of Bolsena and to commemorate the miracle.

Work on the cathedral began in 1290 and continued through until 1534.  The pinnacles either side of the cathedral were later added in 1590 and 1607.

Above the rose window stand the 12 apostles, along with pairs of Old Testament prophets which line the sides.  The Coronation of the Virgin mosaic sits above it.

Of all the buildings and sights we have seen this must be one of the most spectacular.  It oozes opulence with every detail;  its inarguable eminence standing proudly over the square below.

Yet, rather than presenting itself in a garishly, over-the-top fashion as it so easily could have been, it really is a remarkably beautiful structure.