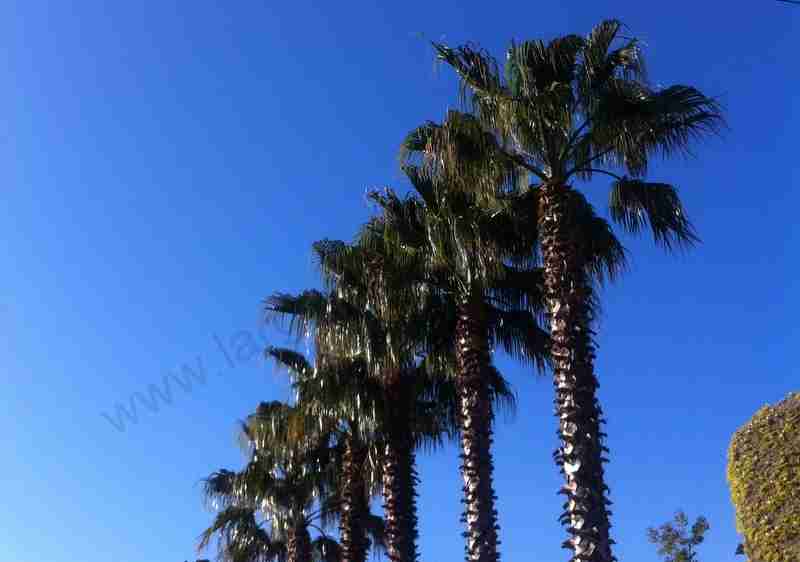 We would be in Cannes for less than 48 hours, so headed off to the beach on the only full day we had.  Thankfully, the weather was glorious!

Fabulous blue skies stretched out over us.  It was early yet the sunshine persevered in shooing away the clouds, resolutely attempting to warm the air up.  It managed to hit a whole 20° which was positively tropical in comparison to the snow we had left behind in Folkestone only a week before.

As we walked to where the minibus was parked I stopped.  Mike and the children thought I was simply attempting to catch my breath and trying to recover after struggling up the steep hill, which seemed somewhat steeper after pushing a double buggy loaded with two lounging, increasingly heavy twins.  I was actually trying to capture the beauty of the palm trees set against the beautiful blue sky.

The beach was a ten minute drive away from the house.  The area was not as I had imagined it to be.  I had thought it would be far flashier and ‘exclusive’ with a Des Res on every corner within a Hollywood-type environment, but it actually seemed quite ordinary compared to the images I had envisaged.

One thing which remained the same though, was the difficulty in finding a parking space for Jalopy.  With permit parking or every available space already taken, it seemed our visit to the beach may have been doomed.  Car parks existed but once again the possibility of us parking Jalopy within them was snatched away by the inconvenient yet familiar height restrictions.

We continued to drive along the beachside boulevards until we found an outdoor parking area by Port Pierre Canto.  There are no height barriers to enter it and you need a ticket from the meter.

As if our rust-encrusted, overloaded minibus wasn’t already looking out of place, parking it in a port where the finest, most beautiful yachts are docked must only add to Jalopy’s lack of self-confidence.  Or at least, it would if it had the human ability of lacking self-confidence – a trait I am sure that motor vehicles do not possess.

Until you park them in a port where the finest, most beautiful yachts are docked, that is.

Just look at these:

We walked around on the promenade beside Port Pierre Canto, continuing on to the Boulevard de la Croisett (also known as the Promenade de la Croisett).

The La Croisett  is famous for its exclusive hotels, expensive designer stores and distinguished restaurants.

The 2km stretch of road which overlooks the Mediterranean Sea is also famed for hosting the annual Cannes Film Festival.  What we didn’t realise is that during our weeklong stay on our return through France, we will be right in the midst of the festival itself!

Our single visit along La Croisett in April was during a time when the hustle and bustle wasn’t too bad.  People would walk along the promenade in clusters and groups each of whom would stop and stare as we walked by.  Cannes was obviously a place where large families were seldom seen, given the looks and stares we received as people passed.  It was an area where toy dogs in handbags were more frequently seen than children were, so to have a family with so many seemed to be a somewhat unusual occurence.

The temperatures struggled to hit the twenties as the breeze blew along the beachfront.  Few people sat on the beach itself, but as the day wore on many more joined those sitting along the promenade itself, looking out across the Mediterranean sea under the vividly striking blue sky.

Isn’t that an astonishingly splendid view?

I imagine that our next visit to Cannes might be busier than the last, what with the film festival to contend with and all!