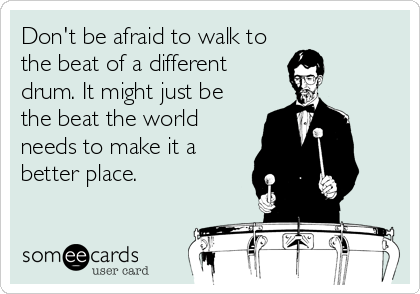 What I hadn’t prepared myself for was the absolutely overwhelming amount of support and kindness which we received through emails, messages and tweets.  The fact that not only did people seem to like us, but seemed to like what we believed in – or at least respected our choices and the reasons we made them.

As you can imagine, we’re no strangers to criticism.  It has been rife not only from strangers but also from those we thought were friends.  Even family have harboured strong opinions on what we should and shouldn’t be doing, and their arguments were based on what is deemed to be acceptable according to society’s view.

We decided a long time ago to break free from what society thought.

We looked around and saw children being bullied, or not reaching their full potential in an ever-changing education system.

We saw bosses taking advantage of their employees, with loyalty expected but none returned.

We saw the rat-race and people running around the hamster-wheel within it – living to work not working to live, day after day after day.

We saw it and we experienced it.

And we thought, no.

If this is what society says is the right way, the proper way, the normal way to live well, we don’t want it.

We don’t want our children to be bullied or denied the chance to reach their full potential.

We don’t want to be taken advantage of by employers any more.  Our time is precious.  We want to earn our worth, not what someone else thinks we are worth.

We took the things we were unhappy about and instead of doing what society tends to do which is complaining about them, we did something about them instead.

Why does this have to be the way things are just because society says so?

Who makes the decisions anyway?

Or is it just because we are conditioned to accept what we see and hear and are told is right, and we follow an unspoken rule never to question it all?

So we did something about the things we were unhappy with and we changed them.

It doesn’t seem to like it when people do something different.

Why would you want to do this?  Or that?

Why would you want to stand out?

Why don’t you just do what everyone else does?

But eventually there will come a time where you realise that society isn’t the one living your life.

And just because society is made up of the majority, what the majority says isn’t necessarily right for you.

Sometimes it takes strength to break away from what is expected of you.  Sometimes you’ll find yourself up against such pressure – adults can be worse than children at times!  And sometimes you’ll hear people say things about you that are, well, hurtful.

But at least we can look back on our lives and say that we lived for us and nobody else.

And I hope our children will look at us and see that being different, and walking to the beat of our own drum, doesn’t mean you’re doing something wrong.

And that nobody, but nobody has a right to tell you to do or say or live otherwise.

And I hope it gives them the confidence to be different.  To not go with what the majority is doing.  To not accept what society says is right.  And to question things every step of the way.

Be true to yourself.

Find your own beat to walk to.

Because nobody else lives your life except you.

So live it for you.

Live true to yourself.

And live a life with no what-ifs and no regrets.

4 thoughts on “A different drum”