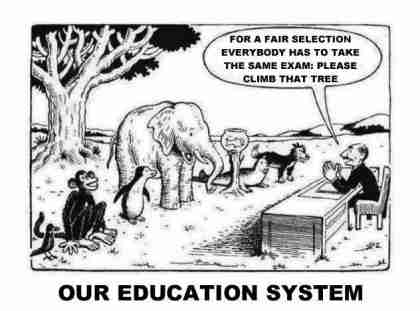 Yesterday I explained why the recent results of national tests had confirmed that our decision to home educate our children was the right one.  Today I want to explain why a good education isn’t just about achieving high grades in the top subjects, and how home educating is a feasible, realistic alternative to providing a better learning opportunity than mainstream schools are able to.

The education system was introduced in order to provide children the opportunity to read and write, to gain at least a basic level of learning and have an overall better standard of life.  Subjects were created and over the years it has been decided what a child should learn and at which age and stage they should learn it at.  Classes were created in which groups of children of the same age were taught the same thing at the same time, for several hours each day, day after day after day.  No thought was ever given to whether these children had the same skills or abilities as that would be too complicated to implement, so the simplest way to group them would be by age.

Yet, here is a thought to consider.

Education is not a one-size-fits-all system, yet here we have a procedure through which individuals are drilled and conditioned over the course of several years to think, say, do and perform as each of their peers.  The only thing in common that these individuals have is that they were born within a certain time of each other.

Putting a child in an unnatural environment made up of a couple of dozen other children the same age does not guarantee positive results yet this is what we have come to accept as the normal and ‘proper’ way for them to learn.

Schools could be defined as a production line made up of individual little people, grouped in packages of little people, who are passing through on a conveyor of things they need to know now, moving onto another conveyor of things they need to know next.  They continue travelling along on their ‘little people conveyor belt’ until they reach the end of their journey and are delivered to ‘the real world’, having transformed into bigger people during their travels. Their journey through this conveyor is set and does not veer  regardless of the individual competence, intelligence or talent each may have.  Mainstream schools do not have the time, money, resources or inclination to nurture and develop any individual skills or talents and so instead they thwart them. Other things need to be done first – more important things.

Every child is different.

In  the real world we need different things at different times from different people who have different skills.  After all, even the best doctor in the world is no good when your pipes have burst.  When your home has a leak flooding through your ceiling, the plumber who stops it is the most important person in the world at that given time.

Education isn’t just about teaching children what we think they should know and asking them to perform back to us like seals in a circus.

It’s about allowing them to learn about things they love or are interested in, in a natural way they feel comfortable with and letting them take the lead.

The enthusiasm they exude through an hour or two of learning about something they enjoy results in an education that hundreds of hours in a classroom could never give, no matter how good the teacher.

Have you ever considered what skills & talents are lost by the time a child reaches 16 because ‘it’s not real education’?

Isn’t it time we stopped trying to fit square pegs into round holes and embraced our children’s skills, talents, abilities and strengths and not try to suppress them because the current curriculum doesn’t focus on them or think them important enough to nurture?

It might not be the kind of education we are conditioned to accepting, but isn’t it time we reconsidered what it means to be educated?