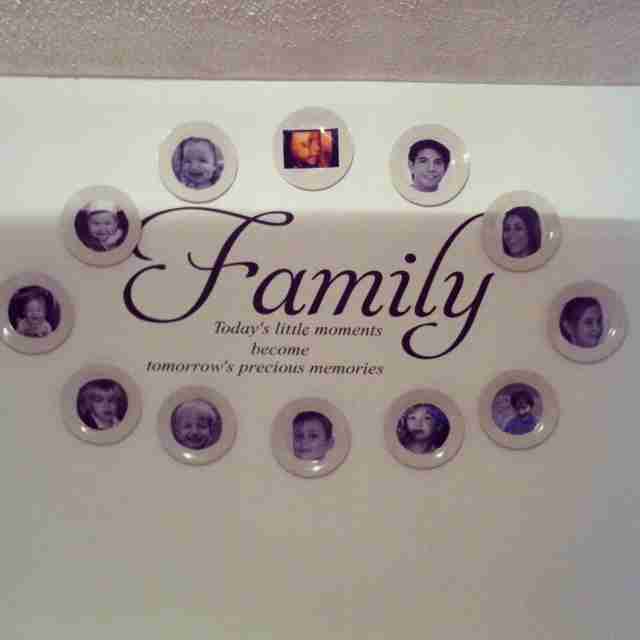 This is such a simple feature but is always, always commented on by anyone who visits.  Not only is it simple but it’s also very cheap to create.

I saw this idea a few years back now but the design we created at the time was set out for only our (at that time) seven children with one on the way and had not been updated even though our family had continued to grow.  Since we redecorated a month or two back we had to re-think and update our design.

This feature wall faces the doorway through which you walk as you enter the living room, ensuring that any visitor is faced with all twelve children’s treasured photographs set around a quote about family.

We ordered the quote online – there are several places which sell a variety of quotes and phrases from which to choose.  Our quote says: Today’s little moments become tomorrow’s precious memories.  (Actually, the quote we bought stated that today’s little moments becomes tomorrow’s precious memories, but we omitted transferring the apostrophe in ‘becomes’ as to have something so blatantly incorrect would have been a source of annoyance every time I looked at it).

The photo feature itself cost extremely little.  We bought a dozen side plates from Wilkinson at around 60 pence each and placed an order of a selection of black and white photographs of each child.  There always seems to be one deal or another for ordering photos online so make sure you look around for a good bargain or discount code you can use.

Once the photographs were delivered we centred each child’s face so that it fitted within the centre of the plate then cut around it carefully.  As you can see, even Baby Sullivan has their own plate even though they aren’t born yet.  Just think, in little over four weeks that 4D picture will be replaced by a real photo!  A little touch of gluestick on the back of the photo and voila – a great feature for less then seventy pence each!  In fact, the plate hangers cost more than each plate did!

Overall the total for the entire feature came to under £20.00.  This is far less than I’ve seen some photo frames sell for and I think it looks so much nicer and unique too.

If anyone out there tries this idea out do send a photo and share it – I’d love to see your family photo wall feature!