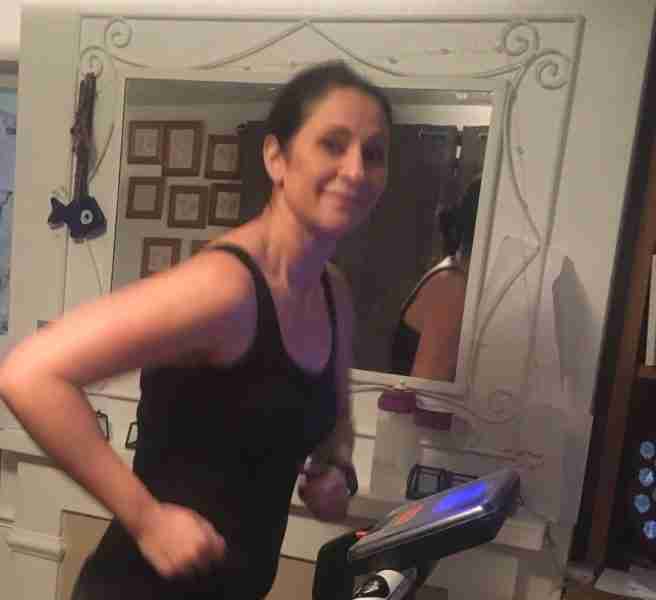 It was late into 2015 that I got fed up with being fat and decided to do something about my weight. My wake-up call that I needed to do something about my health came when my fit, healthy brother was diagnosed with leukaemia. He could undergo the most aggressive treatment available precisely because his body was so fit and strong. If it were me, I didn’t stand a chance.

My brother was the one who encouraged me to get healthier for my own sake once and for all, and introduced me to DDP Yoga which became the workout that led me to lose 60lbs within the following year. Devastatingly, the cancer that ravaged his body was so evil that Jimmy died almost one year to the day after being diagnosed.

During this time I came to realise that I actually enjoyed working out. Well, that isn’t strictly true. The idea of working out still doesn’t excite me, most of the time. I can always think of something else that I would rather do, more often a considerably less exertive and significantly more seated alternative to getting off my butt and moving my body. Often, I have to make myself begin.

‘Just half an hour,’ I tell myself. ‘And then you can stop if you want to.’

Usually, once I have begun and reached the point at which I had bargained with myself to hit, I’ll find myself willing to move on and complete a full workout. In fact, I don’t believe I have ever quit at the point I had given myself permission to stop at. Psychologically, giving myself permission to finish a workout early seems to give me the motivation get started rather than copping out completely.

How ‘I am not a runner’ became a 5k running challenge

I love a challenge. I love to learn new things and I love to try something different. I also love to see what I am capable of and to challenge my own beliefs in what I think I can and cannot do. Ultimately, I think anyone has the ability to do anything if they put enough work and effort into it.

Whilst I had always been fine with strength training or general gym equipment such as the exercise bike or cross trainer, running was something I had not done since my school days.

Despite it being over two decades ago, the dreadful memories of forced cross country runs around the muddy school field in the cold, lashing rain remained. Sprints were fine, but long distances, no. The image of myself struggling to complete even a quarter of a lap before frantically trying to rub away a stitch while the teacher yelled at me to continue left me believing that this particular activity never had been and never would be for me.

‘I am not a runner,’ I would often declare.

Until last year, where I wondered whether I perhaps one day could be.

I began slowly, barely able to run for a minute without feeling as though my eyes were about to explode from my head like over-ripe pimples. I tried following various Couch to 5K programmes but found them advancing far quicker than I was physically able to follow. I ditched the Couch to 5Ks and made myself a deal. I allowed myself to just run. I could do as much or as little as I could. I just had to run as often as I could.

In June I decided to have another go at running. I set myself a challenge to run every day. I got halfway through before I got ill and couldn’t continue.

In July, I set myself a challenge to ‘just run’. By the end of the month I had managed to complete a 5K every other day.

The only way to get better is to keep trying

It is only in the last couple of months that I decided to make a concerted effort to try my best at this running lark. It seems I dedicate myself better to a task when I set myself a personal challenge and, so far, it’s working.

Now, let me be honest here; I did not run the whole 5K every day. I am still building up the distance I am able to run and the technique I now follow seems to work better for me than the Couch to 5K programme did.

My treadmill measures distance in miles rather than kilometres. There are approximately 3.2 miles to 5km. Now I am able to run a minimum of a mile without stopping. It might not seem very much but it is a lot more than I was able to do when I first began. Remember, I couldn’t even run for a minute straight! The other 2.2 miles that make up the 5K distance is a mixture of a run/walk. At the end of each mile I record the time taken to complete it.

Here is what happened by the end of the month:

I developed a stronger mindset

When I began the challenge to ‘just run’ at the beginning of July, I would struggle to complete the first full mile. I mean, I would really struggle. My lungs felt as though they were going to burst and my head hurt.

It wasn’t a pleasure during the run – it still isn’t. But I knew that if I stopped a run early without at least walk/running the distance, I would feel regret for doing so. As long as I started, I knew I would complete that day’s challenge. And I knew that once I had completed it, I would feel such a sense of accomplishment and the exercise high would hit, despite my exhaustion. All I had to do was start.

During every run I kept a record of the finishing time of each mile plus the finishing time of the 3.2 mile total. I didn’t better my times on each consequent run. Every day’s performance depended on so many factors I didn’t even think of before. But I did learn more about my body and improvement did show by the end of the month, as I will explain.

I became aware of my energy levels

Some days I ran slower, some days I had to walk more during miles two and three. I became aware of my body more. My performance and my body’s energy levels would be affected by things like what I had eaten or when, how much sleep I had, or even my mood. I would run more effectively when stressed, the activity providing me with a valuable outlet for tension and lifting my mood significantly by the time I had finished.

The tremendous weather was something to contend with, though. Despite efforts to keep myself hydrated and having an electric fan on full pelt in front of me as I ran, I did find it tough to keep up with my challenge on some days due to the heat.

I got better at it

Running that first mile was no longer the slog it had been at the start of the month. Most days, I could complete it without feeling I was going to dramatically collapse in a heap that would need to be scraped from the ground like roadkill struck by a heavy goods vehicle at top speed. Not only that, I could continue, increasing that section of running by another .1 or .2 of a mile.

The walk/run of the remaining distance had improved too. Rather than running for .1 of a mile and walking the following .2 before trying to run again, I had managed to mirror it instead.

By the end of the month the duration I could actually run for was longer, my walking decreased, my pace and speed increased and I had achieved several new personal bests time-wise. My overall time for the 3.2 miles (5K) had decreased by almost five minutes.

I also increased the distance on at least a couple of the sessions per week to 10K, again continuing it as a walk/run.

There is a saying that it takes four weeks for you to notice a change in yourself, eight weeks for close friends and family to notice and 12 weeks for the rest of the world.

By the end of the month I could see and feel how my body had changed. My legs were becoming noticably stronger, my waist had whittled back down enough for me to go back down two notches on my belt and I felt better within myself overall.

And I also lost 9lbs.

I had planned to continue throughout August but have succumbed to a touch of sickness which includes a chesty cough so have to give myself a couple of days to recovery fully. There’s no point pushing my body if it needs time to recuperate, after all.

For the moment I am happy to continue with my own personal challenge. I look forward to getting over this cough so I can hit the treadmill again, keeping a minimum 5K target for each workout and adding a 10K one every few sessions.

I will continue to record my progress too as I find it interesting and motivating to compete against myself and better my performance. I am nowhere near ready for park runs or competitive challenges yet but that’s okay.

All I need to do is just run.

One thought on “I Completed a 5k Every Other Day for a Month. This is What Happened…”