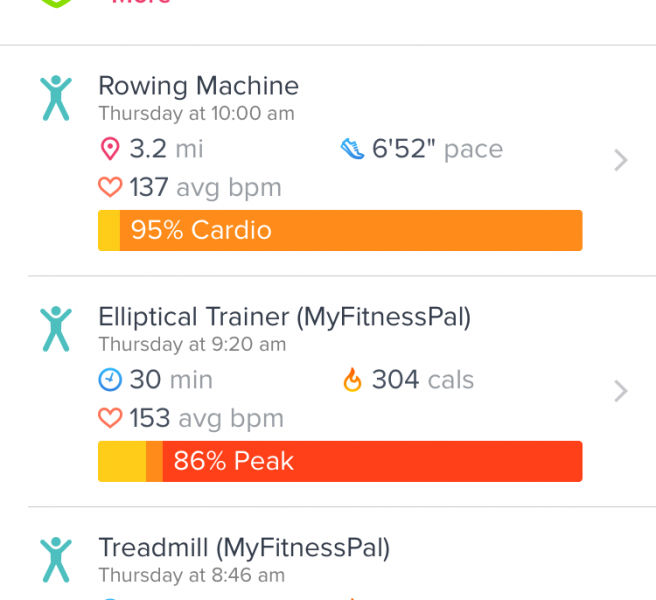 After almost two months away and very little exercise indeed, a return to our pre-travel workout regime was expected to be a little difficult.

Talk about an understatement!

It is said that it takes 21 days of doing something before it becomes a habit. After more than a year of incorporating exercise into our daily routine for 5 or 6 days a week, we failed to keep the momentum going as we were travelling. That meant we had almost two months to get out of the habit. Once you get out of the habit of doing something regularly, it leaves a void that is almost always successfully filled with excuses.

‘I will do it later/tomorrow/Monday…’

Excuses are easy to make but they aren’t very productive. I will 100% guarantee that you can find an excuse for anything at anytime. The danger is believing the excuses you tell yourself. If you don’t do something you need to do, you won’t get the results you want to get. Letting your excuses take control of your life means that you lose control of it, be it health, wealth or happiness.

And I have a 7lb gain to get rid of and need to get myself back on track.

I didn’t expect that I could get straight back into a 2-3 hour workout as I had been doing so decided not to put that kind of pressure on myself.

You’ve had a break. A long break. You need to do something to break the break. So do what you can. And then a little more.

Just a deal with myself that I would do what I could whilst still keeping it challenging.

I work better at anything when there is an end goal to aim for. It keeps me focussed which in turn helps me to break through the ‘I need to stop’ moments. I needed to remind myself that exercise is not a punishment or something to dread. All I needed to do to get back on track was to begin.

I reminded myself that the following few days aren’t about starting where I left off, they were about being kind to myself, allowing myself to build back up at whatever pace I needed to. Being kind to myself was no excuse for being soft on myself either. Setting 30 minute goals for the treadmill and cross trainer, along with a 5k workout on the rowing machine meant I had given myself targets to work to. They were less than I was used to doing before but combined meant that I would still have an hour and a half’s workout in a day which is not bad at all.

Only a few weeks before we set off we added a treadmill to our home gym. It’s a home gym that, for now, is scattered around the house in wherever a machine will fit: cross trainer in the bedroom, rowing machine folded up in the living room and now a treadmill in the hallway – all second hand but in fantastic condition – apart from the cross trainer which now needs replacing. These machines, together with continuing a few DDP Yoga sessions a week, meant we had managed to create an effective and mostly enjoyable workout regime that we could fit in without the hassle or expense of going to a gym.

It had taken me five weeks to reach Week 3 of the Couch to 5K programme but I didn’t think I could start back where I had left off so I decided to re-start from Week 2 instead. Well decided, I told myself, as I hit the 20 minute mark, puffing and panting away already. By the time my half hour was done I was working up a decent sweat and the endorphins were kicking in enough to keep me positively focussed on the next workout.

Then came the cross trainer. I would usually do an hour to an hour and a half, switching the settings according to whether I wanted to focus on more of a strength-based workout or cardo. Today, I had told myself, I only had to do 30 minutes.  Perhaps my decision to leap right in with a higher resistance workout wasn’t the best, I told myself as I found myself slow, sluggish and undeniably struggling only 15 minutes in. By 20 minutes I was ready to quit.

Don’t watch the clock, I told myself. I still did, aching at the sight of only 15 seconds having passed when I believed I was at least two minutes further along than I was. The feeling by the end was not of accomplishment but of relief.

I did not quit.

I was two thirds of the way through my deal with myself. All that was now left was the rowing machine.

The beauty of the three machines is that they all provide a very different workout. Even though they all work out the lower body, they do so in different ways so, despite my legs feeling quite jelly-like after having already done an hour on the cross trainer and treadmill, they impressively managed to cope with the end of my day’s personal challenge on the rowing machine.

By the end of the workout I was incredibly hot and sweaty. I knew it wasn’t the best performance I had ever done, not by a long shot, but I felt satisfied that I had finally done something rather than nothing. I took charge of the excuses, I got on and I did.

I challenged myself, set myself goals but was also kind to myself, proving once again that the key to my physical state begins with my mental state and through understanding this, acknowleding it and taking control, I managed to break the break.