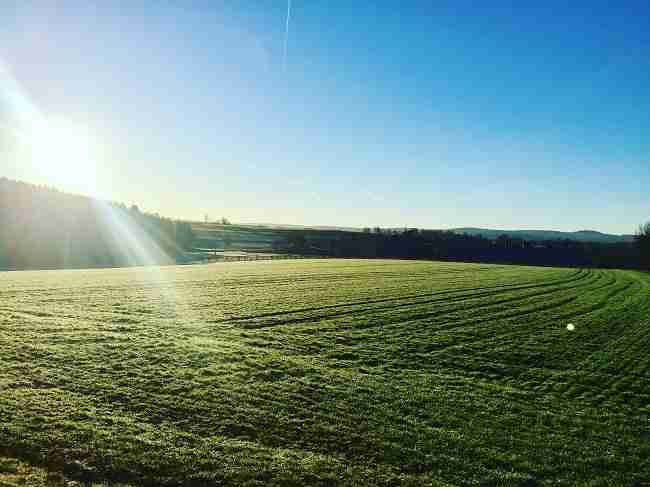 In hindsight, it probably wasn’t the best of ideas to have booked an early morning Eurotunnel crossing on the morning the clocks sprung forward an hour. The 4.30am start that beckoned was no more appealing when we kept translating it as ‘4.30am – actually 3.30am by yesterday’s time,’ because we, it seems, like to punish ourselves in such a fashion.

As if preparing to travel with ten children isn’t enough punishment in itself, I hear you say!

Or perhaps you didn’t.

But you likely thought it.

Or at the very least questioned our sanity.

Our attempts to get the children ready for our aim of a 5.30am departure was successful almost to the minute. Our endeavour to have them outside and seated on the minibus without creating noise or fuss was somewhat less so, and we would likely have been more successful if we were attempting to stuff a vaseline-covered octopus into a wine bottle. That said, hugs and goodbyes were exchanged with Caitlin, who had thoughtfully dragged herself from her comfortable bed to see us off. Ben had clearly decided against it – or of contacting us at all since, as a matter of fact. Does he even know we’ve gone? Who knows? Nonetheless, the deed was done, the minibus was loaded, the engine was turned on and the 12 of us were on our way. The AWTY (‘Are we there yet?’) chorus did not take long to begin and our kindly reassurances to the children that if they were tired they could just get themselves to sleep as the bus drove along soon turned into pained pleas for them to close their eyes and see if they could, closely followed by concentrated attempts to telepathically will them to sleep. FYI, kindly reassurances, pained pleas nor telepathic willing worked.

The first day of our travels would be the longest, this we knew. With no stereo in the minibus we were instead subject to renditions of My Little Pony ditties interspersed with Minecraft parodies. ‘A True, True Friend’ meets ‘Diamond King’. On a loop. For more than 12 hours.

This wasn’t our first foray into driving long distances with young children. We’ve been taking road trips since our first two month tour of France and Italy back in 2013. Tim was not born then and Isobel was only five months old when we set off. It looks like the younger children won’t remember a life without travel.

Despite being relatively old hands at it, some realities remain unchanged. The AWTY chorus being just one of them, with encore performances taking place after approximately 30 seconds, the sharing of the role of lead ‘singer’ very kindly being distributed between the youngest four most regularly, with an occasional guest performance from the middle ones.

Then there’s the ‘Niggle And Annoy Club’ that the older children have formed, where they can most frequently be found aggravating each other in whichever vexatious way they possibly can. The NAAC seems to comprise of several sessions: the aggravation interspersed with sulking, arguing and general moodiness then back to aggravation again. Otherwise, they will read or look out of the window and spend their time watching the scenery pass beside them as, evil parents that we are, we refused to allow Kindles to come along this time, the arguing over charger-hogging as so-and-so already has 98% of battery life compared to the protestor’s 97% having been heard too many times to contemplate enduring again. ‘You’re travelling to all these wonderful countries! Why have your face stuck in a screen?’ was probably not going to go down as the most popular parenting quote ever, it’s fair to say.

Whilst we are on the subject of long-distance travel with kids, can we even overlook the INAW club? This is where the AWTY chorus temporarily gives way for the ‘I need a wee!’ intermission that, of course, wasn’t on the score at the point where we passed the service station just 2km ago but is now rising to a crescendo as it reaches a desperate state of emergency. And typically, there is not another service station anywhere on the horizon so instructions of, ‘You’ll have to hold it!’ echo with varying degrees of sternness depending on who saying it was sitting nearest to the critically afflicted.

Stopping for our travelling troop of INAW choristers isn’t so bad in Germany. The autobahn is wonderful to drive along; clean, clear and mostly problem free. German efficiency can be seen everywhere and the toilets at the service stations are no exception, providing a wonderfully compelling show after the toilet flush whereby the seat is sanitised, then rotates as it is cleaned automatically. Well worth the fifty to seventy cents to use the loo although, when you consider so many of us are travelling, you’ll realise we’re easily looking at €6 or €7 for a family tinkle session.

Thinking that Germany might be too cold and rainy at this time of year to set up camp, especially after such a long day of travelling, we decided to book ourselves into an apartment for the night instead. Despite doing so many months beforehand, it proved difficult for us to find somewhere at a convenient midway point between the Eurotunnel terminal at Calais and our planned next stop in Croatia that could not only accommodate us all, would allow us to rent for a single night rather than the usual two night minimum, but also would not break the bank. We found one place available on the date we needed called Hendlmühle in Tirschenreuth, Wondreb.

According to Google Maps, Hendlmühle’s distance from the Eurotunnel terminal is 600 miles and it is positioned at the far east side of Germany, meaning that we would have a very long drive right across the whole country. Our Eurotunnel crossing was leaving at 7.20am and would take approximately 35 minutes to complete. Once in France, we would need to turn our clocks forward an hour which meant it would be 9 o’clock in the morning before we even left the terminal. Google Maps estimated our journey would take nine hours. Google Maps is the harbinger of optimism when it comes to estimating our travel times. We were more realistic – note: not pessimistic – and estimated that we would arrive some time between 7 and 8pm.

We drove along accompanied by the chorus that would on occasion show us some compassion and give in to a little sleep. Solace was often short, with the vocalists recharging themselves just enough to continue their award-winning production (the award being that to drive your parents mad) on waking.

During the booking process at Hendlmühle we were informed that we could not all be accommodated in one property which is not unusual when you need a short term let but are travelling with such a large group of people. They could, however, offer an apartment for seven and a second apartment for the remaining five. At €70 per apartment per night and with no alternative to choose from, it was an offer we could not refuse, and we looked forward to arriving and falling into bed after such a long day.

The drive through Germany was going well. Extremely well, in fact. Mike and I love Germany and Ollie is teaching himself German as he quite likes the idea of becoming a German farmer when he is older. As we drove through the open fields, admiring the views, Mike and I began chatting about wanting to discover more of the country.

‘Wouldn’t it be nice to take a tour of Germany?’ I said. ‘I’d love to go all around the country and see different parts of it. It all looks so lovely!’

And with that, two lanes of the motorway closed, the traffic built up and we came upon a diversion which took us off the Autobahn, through a town and around the houses, adding another hour or so to our journey.

Be careful what you wish for springs to mind.

We continued to drive along and as the afternoon turned into evening it soon became apparent that we would not reach Hendlmühle before nightfall. As I opened up my folder to double check the address I came across a sentence informing us that check-in was until 8pm.

8pm? But it was five to eight now!

I tried contacting through the telephone number provided but could not establish any connection at all. I then hurriedly switched on data roaming and tried finding an email address to contact them through, which I did. I had visions of us turning up to a deserted complex, unable to find anyone to help us with our rooms for the night. Still, we always had our tents, I mused.

One last attempt at trying a second telephone number and what sounded like an elderly lady answered the phone.

‘Hello. We have booked two apartments with you tonight…’ I began.

And she replied in a lot of German.

‘Ja,’ she replied. Then more German.

How do I explain this?

‘Mein son,’ she said to me. Then started shouting, ‘Helmut! Helmut! Englisch!’

I assumed this meant that she was getting her son who could speak English and I could explain it to him. After a few seconds Helmut came to the phone.

‘Hello, we have two apartments booked tonight and we are going to be one more hour’

And he replied in German. Oh dear, this wasn’t going very well at all.

And so we struggled, me repeating in English and Helmut replying in German.

‘Okay, okay. Drive good!’ Helmut told me. All I could do was hope he had understood. And that Mike would drive good.

Over the next hour darkness had completely enveloped us as we drove through the countryside.

‘Is this what Helmut meant when he said to “drive good”?’ I asked Mike. There were no lights to light the way and we could only hope we were going in the right direction. It was close to 9pm by the time we finally pulled into Hendlmühle, where Helmut was standing in the shadows of the buildings set far back from the road waiting to greet us.

As he showed us to our apartments he explained that whilst we had booked apartments for 7 and 5 people, our apartments actually only accommodated 6 and 4. His non-English speaking mother came out and, obviously concerned, began producing blanket after blanket so that we could create extra beds on the sofas. I tried reassuring them that it was not a problem at all and that the younger ones could easily share beds. I also wished I had paid more attention in the single year of German lessons I took at school instead of watching Mike do PE out of the window.

We had no idea what lay outside our apartments or what we might be in the midst of. The night was too dark to see further than a few feet before us but the sky was clear and the stars were incredibly bright and we all took a moment to look up and admire them before heading in. It had been over 13 hours since we had left home that morning thought it felt far longer for all of us. We all gathered in one of the apartments first as we stretched our legs and looked around our home for the one short night we would be there. Hendlmühle was warm, comfortable and much appreciated after such a long journey. A little old fashioned in its design, it was cosy and scrupulously clean throughout. With sleeping arrangements made, a quick dinner of hot-dogs wrapped in tortillas and a hot cup of tea and shower later, and we were all in bed ready for the morning when this view greeted us, and we were ready to hit the road once more. 4 thoughts on “Setting Off on our Travels: Day 1 – Germany”