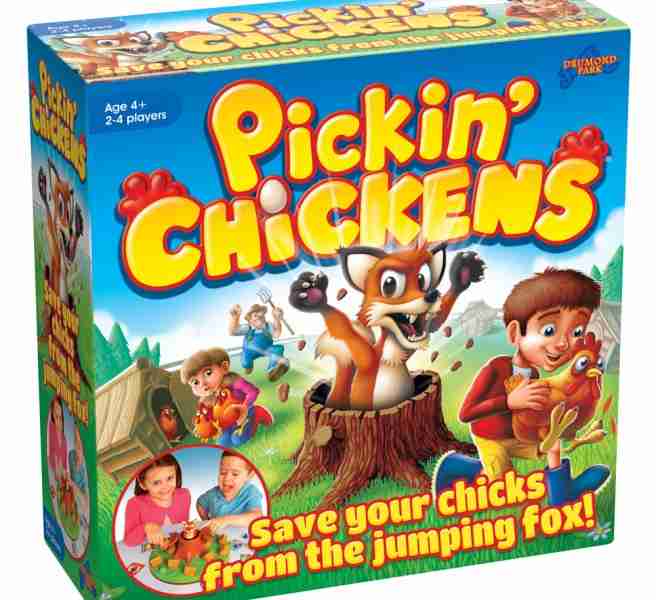 We have been fans of Drumond Park since the older ones were young children. We’re astounded that they can put out fun, original games that are enjoyed by our entire family every year and that they never appear to run out of fresh ideas.

They’ve recently released a game for kids aged four and over called Pickin’ Chickens (RRP: £19.99 for 2-4 players) and it has resulted in many fits of laughter in our house. It appeals to both younger and older children due to the two different levels, an easy one for young ones and a more difficult one for those who like a challenge. Both levels have the same goal: collect four chickens before anybody else! In the easier version (Young Chicks) the chickens can be any colour. In the more difficult one (Older Chicks) you have to collect your four chickens in each of the four different colours (red, green, yellow and blue). There is also a single farmer card which needs to be placed to the side. To decide what colour chicken you collect, the youngest player spins the Field Circle and the players grab a single chicken coop. Under each coop is a picture of either a chicken or a farmer. If you pick up a chicken, you take the model that corresponds to the colour shown. If you are lucky enough to pick up the farmer, you pick up the farmer card from wherever it was at that time – taking it from another player if required! It sounds almost too easy, right? Well, there is a twist! The game cannot begin until a fox is pushed down his tree trunk. This crafty creature is able to pop up as and when he feels like it, which makes him a real pain to the players. When he shows himself, every player must give up one of their chickens unless they are the one lucky enough to hold the farmer card. When one chicken from each player has been put back into the middle, the fox can be pushed back down and the game continues. It makes for a lot of fun as everybody playing really gets into the competitive spirit! The younger kids became focused on trying to gather their chickens while the older boys preferred the more difficult one as it enabled them to think a bit more in order to work out where their preferred coops were. It was a long time before any of the kids decided to play something else, and it has already become a regular game they like to play before bed. As the weather goes back to being more and more miserable it’s the perfect way of keeping them all occupied and distracted without plonking them in front of a screen. Not only do we think it’s a good form of entertainment, but it also allows them to bond with their siblings and get involved in some healthy competition! While Tim was too young to play, he did love running back and forth from the game to our garden to compare the model chickens to our real-life ones. I think he was slightly disappointed that ours aren’t green.

We have three sets of Pickin’ Chickens to give away.

Which of the below is NOT the colour of a collectable chicken?

Leave your answer in the comments below.

I have entered to win a game of Pickin’ Chickens with Larger Family Life. Follow @LargerFamily & RT to enter!

373 thoughts on “Review: Pickin’ Chickens and your chance to win!”