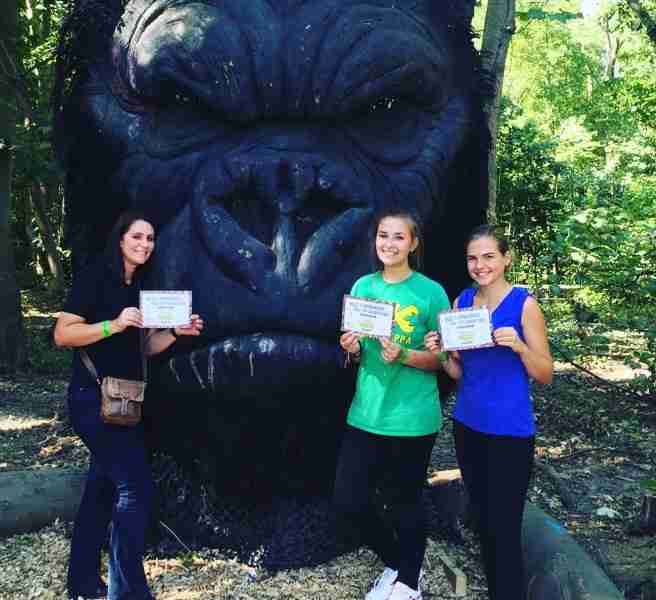 This week saw Caitlin celebrating yet another birthday. Honestly, with the speed at which her birthdays seem to come around I’m sure she must be about 64 by now or something.

She is insistent that she’s only turned 17 which is fine by me because if she were 64 I would be almost 90, and I’m definitely not feeling that old.

In fact, I don’t feel old at all. I actually feel much younger than I have done in a long time, something I fully credit with losing weight and getting fitter and healthier than I have been for years. So when Go Ape invited us to try out the newly opened Tree Top Adventure course at Chessington I decided that not only would I sign up Caitlin and her friend Bethany to test it out (because you know how Cait asked for more memories this year rather than ‘things’), but that I too would give it a go. Well, why not? With almost 50lbs down so far, it’s time to start making up for the time I lost feeling fat, ugly and lacking confidence in myself. What better way to begin challenging myself than by swinging through the trees?

Initially, more of the family were going to join in too but Go Ape has restrictions on how many it adventurers it will allow to participate unsupervised depending on their ages. You need to have a certain number of adult (18+) supervisors to each younger adventurer. For example, over 18s can watch up to two under 16s, whilst those 6-years-old and under need one adult each to accompany them. To keep things simple (and because our minibus has died a death this week anyway), I decided to take the oldest two girls myself.

Chessington Go Ape Adventure is the 30th to launch in the UK but the first to be situated within a theme park. Even so, there is a completely different entrance to the Chessington World of Adventures and a separate parking area to go to so make sure you follow the signs carefully depending on which one you are visiting.

As Chessington Go Ape Adventure is couple of hours away from our home in Kent the girls and I set off early yesterday morning so that we would have enough time to arrive for our 12pm slot. We had mixed emotions. Bethany was the more experienced of the three of us, having already participated in something similar back home in Luxembourg. Cait and I were complete novices and, as we looked upwards at the course, all three of us felt a sense of nervousness creep in.

‘We can do this!’ we told ourselves over and over again. We checked in at the desk where we were handed a double-sided A4 sheet full of safety instructions that we had to read through and verbally accept. To be honest, I felt that there was a little too much to take in and I imagine a great many people just skim through it rather than read it and take note. Indeed, I barely remembered any of the details in it once I had handed it back. I was more concerned with the course itself and whether I should just back out now.

We were then told that we were not allowed to take even small bags onto the course with us. The choice was to return it and lock it in our car. As my bag also held my ample collection of keys including my car key, which I didn’t fancy falling out of my pocket, I wasn’t keen on this option so the staff very kindly took it back to the cloakroom. However, I did have some reservations about this as I will explain a little later. As a result of not being able to keep my phone anywhere safe there are consequently no photographs or video footage of us completing the course which I was quite disappointed about.

The three of us were soon strapped into our harnesses and, along with three other adventurers who were also booked into our time slot, were then taken through the safety procedures. This was very thorough and not rushed at all. Our guide was patient, knowledgeable and informative. She was also highly encouraging and greatly reassuring which is always a good thing!

Once we had been talked through using the carabiner and trolley clip and the importance of keeping them hooked on (Rule #1: Always stay attached), we had a little practice run to begin with. I completed the practice run’s zip wire with all the grace of Shrek’s Princess Fiona, ending up being dragged along on my bottom at the end. Caitlin did a rather convincing impression of on octopus with flailing arms and legs as she descended whilst Bethany glided down in an effortless Disney Princess fashion. The rest of the course would surely be interesting.

Now, I took on the challenge of climbing, stretching, and generally negotiating all the obstacles high in the treetops knowing full well that I have a terrible dislike of heights. Whilst I was on the ground and before I began it was a concern of mine that I had perhaps bitten off more than I could chew. Then there was the realisation that some of the obstacles looked quite challenging indeed. That we were already wilting with the 30 odd degree heat of the day didn’t help. Normally I wouldn’t mind a day without a cloud in the sky but really, a cooler, more overcast day would have been better.

Despite being a little worried that we wouldn’t remember all the safety advice and how to use the carabiner and trolley we found that all the instructions soon came flooding back once they needed to. After a couple of times of clipping on and off we found that it all came automatically. Having said that, I soon noted that whenever I was midway through any of the obstacles I would choose that moment to double check that I was attached to the safety rope.

As if I could do anything halfway through except hope that I wouldn’t fall!

Some obstacles were relatively easy whereas others were definitely more challenging. Some courses then divided into two options, allowing you to choose to continue with the moderate route or the more testing ‘extreme’. As I was first on the course ahead of the other two I went on and opted for the ‘extreme’ route. Boy oh boy, was it extreme! I was huffing and puffing away like a train up a mountain by the time I reached the platform at the end and shouted back to the girls that they should take the other route. This they sensibly did.

The Adventure comprises of a number of courses which you complete – five of them, in fact. Halfway through the third Caitlin began feeling hot and dizzy. Whilst the course itself was manageable, to do so in such heat was proving to be a little bit of a test of endurance. She sat on the platform to recover a little and, when she was ready, she continued to the end and we all sat on a log beside the path, attempting to cool down in the shade of the trees with our feet on the ground.

After a while and feeling a little better, she decided to continue on with the next course. A couple of obstacles in and she decided otherwise and, using her whistle to call for help, decided to return to the ground. Meanwhile, I continued on to another extreme route on the fourth course and here’s where I struggled! Rope nets are not my favourite things and are even less so now. I just could not get across. Every time I did, the weight of my carabiner and trolley kept pulling back into the centre of the safety rope above which would in turn pull me back and away from the next set of ropes I needed to get onto. In hindsight I should have used a different tactic of getting across further along the top of the pirate ropes rather than trying to step along the bottom but the thing about hindsight is that you don’t get it until after the event. This particular event ended up with me struggling and battling to get back up and using every last ounce of energy until I tipped back upside down. Using the last of my resources to get myself back up onto the ropes, I had to concede that I needed help to get off.

I did complete the rest of that course but my energy reserves had been completely depleted. With only one course left to go we all agreed that it was time to call it a day. We were too hot, thirsty and tired to continue.

We all met up back on the ground and felt much better after a long drink and some food. We were all exhilarated at having completed so much of the course and we all believed we could have successfully continued to the end had the weather conditions been kinder to us. By that point we had been working our way through the course for almost three hours. It was just too hot for that much activity. I knew mine would be exceptionally pretty come morning…. But it didn’t stop me proclaiming that I would be back very soon to take on the challenge against those pirate ropes again. This time I plan to win!

Having tried the Go Ape Tree Top Challenge ourselves we’ve come up with the following tips for those thinking of trying it out themselves:

Tips and thoughts for the Go Ape Tree Top Challenge:

Another couple of thoughts:

Who can participate in Go Ape’s Tree Top Adventure?

Baboons between the ages of 10 and 15 can take part for £25 each whereas Gorillas over the age of 16 can have a go for £33 each. Humans can also join in. There is a maximum weight limit of 20.5 stone and a minimum height requirement of 1.4m.

Where else is there a Go Ape Course near me?

You can check out all of Go Ape’s UK courses here.

Where can I book/find out more information on Go Ape?

Head over to the Go Ape website. It’s all there!

Would we recommend it?

Definitely! It’s not easy and you do need a degree of fitness but it’s a great deal of fun and the thrill of the challenge was incredible.

So, would we do it again?

As soon as I got home I challenged Mike to try it with me next time, thinking that we will go and test out the Leeds Castle course as that is much closer to home for us. Mike has yet to accept my challenge but I’m keen to get back there.

Just as soon as the aching stops, that is!