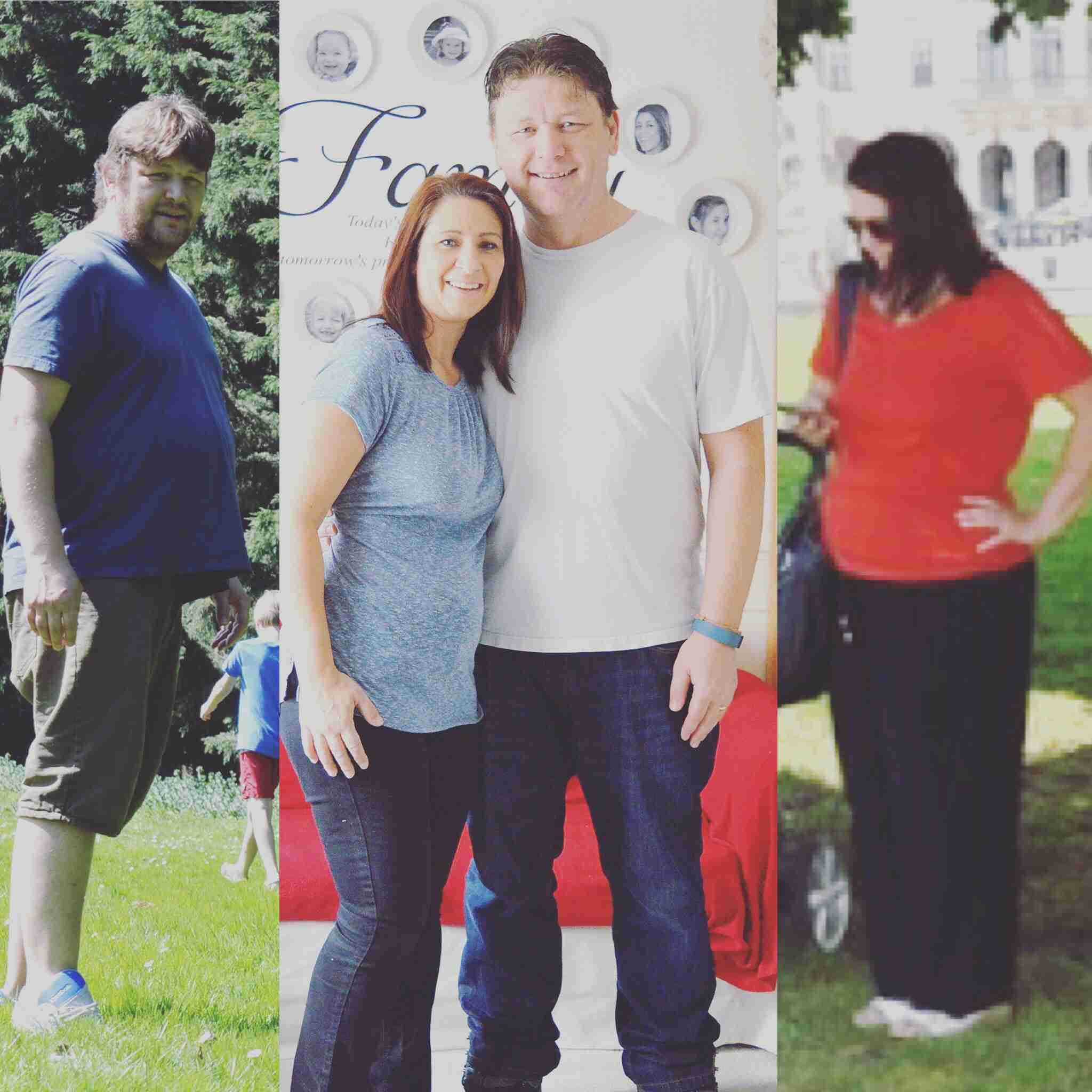 We hadn’t planned on publishing this post for a few more days but since there seems to be a general eagerness for us to share our story, who are we to keep you waiting?!

Yesterday I described how being overweight led me to feeling incredibly insecure. I lacked confidence in myself and was trapped in a never-ending cycle of self-loathing. The more I hated how I was, the less inclined I felt to do anything about it. My view was: ‘What’s the point?’

It was an unfortunate turn of events that finally led me to my lightbulb moment – the moment at which I knew I had to do something to put a stop to this spiral before it was too late.

Like many people, I had found excuses before. Time, money, stress – they could all be used as ways of getting out of what I knew needed to be done. The first thing to acknowledge was that they were just excuses.

There wasn’t anything I didn’t have the confidence or belief in to do in any other aspect of my life whether it was raising 13 children, travelling extensively with them, home-educating them or running our own business. Why on earth was controlling my weight such a battle? Why was this the one thing I just could not manage to do?

I don’t do pandering, I don’t do fuss and I am honest (but I hope fair and kind), with people who try to give me excuses as to why they can’t do something. My advice is usually to work out what you want, work out what you need to do to achieve it and make a plan to realise it.

It was time to take my own advice.

I am about to share the three things we did that changed our lives during the last four months. They are changing our lives still and I want to make very clear right now that none of them are collaborations in any way and everything here is written completely independently. We are sharing the methods we used just because we’ve achieved success by using them.

So here they are:

We started tracking what we ate

We love our food. I mean, we really love it. Portion control wasn’t my strong point – I was raised by Mediterranean parents after all and if there’s one thing people from the Med don’t do, it’s controlling sizes of their food portions. It’s as if doing so would break some kind of law or something, so it’s just not done because, I don’t know, your eyes might fall out if you dared not feed a visitor who came to your home and then your nose would fall off if you didn’t eat with them.

We signed up to MyFitnessPal, downloading the app which was not only free but was the first step to realise just how quickly those calories can add up. So for those of you asking what diet we’ve followed I have to say that we haven’t. We set our goals in the app, it calculated our daily calorie allowance and we decided to stick to it. We got into the habit of logging everything we ate and, when it came to a choice between using up the majority of our calories on one relatively unhealthy blow-out of a meal or pacing it out into healthier options throughout a whole day, we naturally just started making healthier choices on what we would ‘spend’ our calories on. Did it mean we gave up on the odd treat? Absolutely not. Nothing at all was off limits as long as we tracked it. If we really didn’t want to splurge our calories on something, it made us think twice about shoving it in our mouths. And it taught me a lot about portion control too!

We started tracking what we did

We each invested in a Fitbit Charge although had I known what we would discover next, I’d have invested in the Charge HR instead. Regardless, the Charge made us more aware of how active we were – or in our case, how active we weren’t. Quite honestly, we thought we were far more active than we actually turned out to be. I’d have estimated that I would easily walk 10,000 steps in a day – I mean, do you know how active little kids are to keep up with?! It turned out I was incredibly, embarrassingly off target.

We quickly got used to referring to it to see the number of steps we had taken, the distance we had walked, the number of flights of stairs we had climbed and the calories we had burnt each day. Competitive by nature, I challenged myself daily to beat the previous day’s step count or distance. In no time at all we found it a valuable device for keeping us aware of our activity or inactivity over a day, and in turn it kept us accountable also. It also made us realise that we still needed to do more than we were doing over the course of the day. And this is where the biggie comes in…

We discovered an exercise programme that really does work (no, really!)

Like I have already stated, we aren’t collaborating with any companies or brands in writing this post. We are simply sharing the three things that we found worked for us, and how this particular programme is virtually unheard of over on this side of the pond is a mystery to us.

Perhaps it was just us but we had never heard of it before. Perhaps you have, but even if you haven’t, you’ll do well to sit up and listen now. It was thanks to my brother that we found out about DDP Yoga. A wrestling fan from a very young age, he told me how he was planning on using this programme to help him keep some strength during his intensive chemotherapy that he would be undergoing shortly. The programme was created by some American wrestler guy I had never heard of but, according to Jimmy, it was ‘really good’.

Well, Mike and I had talked about wanting to try yoga out but I’m not one for all that spiritual stuff that it involves. I didn’t want floatiness and windchimes, so when Jimmy explained that it was just a mix of yoga combined with dynamic resistance in a straightforward, no-nonsense way, I decided to research it a little more.

The short story is that we researched it, we bought the DVD set and we began. You can see the results in the photo at the beginning of this post. The longer story with a full explanation and review of DDP Yoga will follow very shortly but for now please do take our word for it, this thing works. We have tried a lot of things before but this is convenient, low-cost, and most of all it is effective. We haven’t stopped raving about it since we tried it (just ask my brother – he’ll tell you how thrilled we were with it from the off). If you put the work in, you’ll get the results you want and we whole-heartedly recommend it to anyone trying to lose weight no matter how unfit or unhealthy you currently are.

Want to know more about it? Come back in a few days for a more detailed post devoted to DDP Yoga, how it works and how we got these results.

Edit: Between writing this post and my DDP Yoga write-up I had lost another 20lbs. You can read my post on how I lost weight 60lbs with DDP Yoga here.

So there you go! The three things we used to finally lose our first 80lbs in just four months between us. We still have a little way to go but we know we will get there if we continue as we have been doing. Got questions or want to share your story? Let us know!

2 thoughts on “How We Lost 80lbs in Four Months”