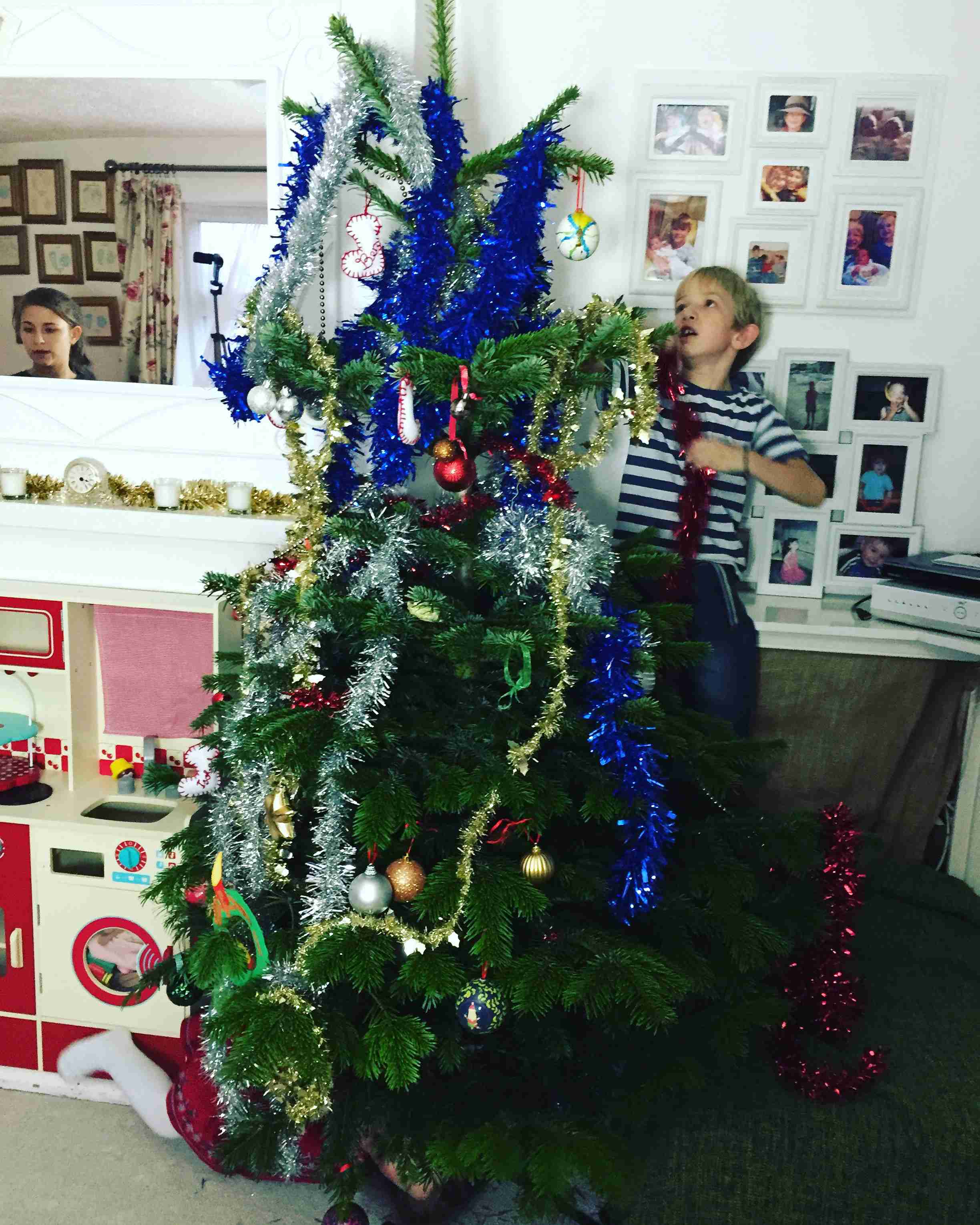 It doesn’t really feel like Christmas until the tree is up so this weekend we did just that. While we do own fake trees, there is nothing quite like a real tree in my eyes. We have a few traditions in our family, one being that the children take it in turns to put the angle on top of the tree. That we have constantly had a new child almost every year, plus one set of twins within it (meaning Libby, the older twin, had the privilege of tree topping one year whilst Anna had to wait until the next), resulted in it taking a very long time for all the children to have a turn. Next year however, it will finally be Ben’s turn again after more than 16 years. I’m sure he will be most excited at the grand old age of 23. Unfortunately, Tim didn’t seem all too convinced about our tradition. Not knowing what was really going on, he started fussing and crying when Mike hoisted him high above his head trying to get him to reach the top of the tree. The poor boy probably thought we were trying to sit him on it instead!

The other tradition we have is that the children get to decorate the trees all by themselves. This results in a lot of mess, a lot of squabbling about what should go where and a lop-sided tree with bare patches in some areas and a terrific bauble overload in others. This resulted in the annual decorations being named ‘Christmas Vomit’, so-called because it looked like the Christmas Fairy had come to visit and vomit tinsel and baubles everywhere.

As you can see from the photo above, it’s really not the kind of look you see in interiors magazines and this year I did something I have never done before. I waited until the children went to bed, removed the decorations and re-decorated the tree myself. I felt quite proud of myself, having gleaned some Christmas decorating ideas from the blogs of home interiors sites such as Danetti and most of the children were impressed. Well, all of them except Anna who came downstairs the following morning, glared at the tree and announced that we had ruined it. That verdict shall remain a matter of opinion, I’m sure and I think I would prefer to go with the majority opinion which stated that ‘it’s nice’. Careful you don’t over-excite yourselves there, kids. The fireplace already has stockings hanging on it. Well, over it, actually. They are little handmade felt stockings I made for each of the 13 children last year. Each one has their name on it and they are stuffed with toy filling and blanket stitched around the edges. They are extremely simple to make and are a lovely little handmade memento to dig out for many years to come.

This year we also decided to decorate the hallway – something we’ve never done before. We are planning on redecorating it (again) completely in the new year so didn’t care much for ruining paintwork. The main centrepiece to greet people – given that there isn’t much room there to begin with – is a little Santa scene that Mike worked on… Not the best photo there but the kids love it!

Is your home looking like Christmas yet? Who gets to decorate the tree? We’d love to hear your ideas so please do share them and inspire us!