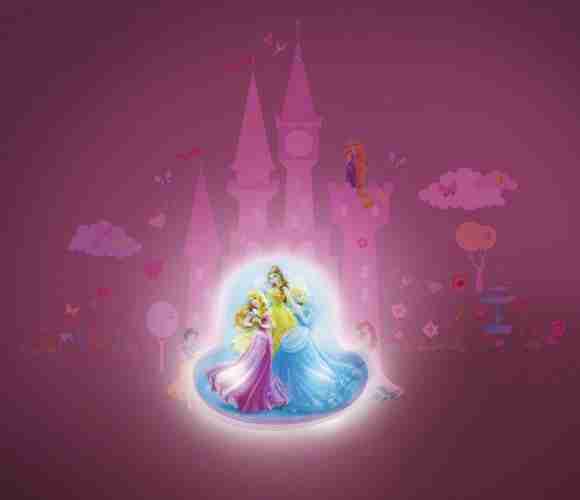 During the summer the kids became accustomed to the light evenings, and if they woke up before 10pm they would be reassured by the slight glow that crept in through their curtains before the day ended. However, with it now being September and with the short days of winter approaching fast, it won’t be long before it starts getting dark before we’ve even eaten dinner, let alone got the young ones off to bed.

The girls especially have a problem with the dark. With the twins being two-years-old, and Isobel only one, they occasionally wake up during the night. They also have a bedroom towards the back of the house, meaning they don’t get the reassuring light from the bathroom shining into their room.

The Disney Princess Safe n Sound Lumiglow Vinyl works not only as an effective nightlight but is also a nice feature on their plain pink walls. It comes with fifty separate stickers, so provides a wonderful splash of colour without making the wall look too cluttered and unsightly. Now the girls know that if they wake up and would like a glow, they just have to clap their hands and the nightlight goes on for two minutes, slowly fading away until the next clap is sounded!

The Safe n Sound Lumiglow Vinyl isn’t just available in a Disney Princess design either. We also got one in a Planes design for the younger boys’ room. Along with the Lumiglow, we received a Tick Tock Teller Vinyl in the Planes design. Similar to the Lumiglow it also comes with fifty additional stickers. We found it gave a really fun touch to the room and is a brilliant product to use when teaching children to tell the time!

It’s great to see them get creative, deciding whereabouts they want to place the Disney Princesses. And if they decide they put the sticker in the wrong place, they can easily peel it off without causing any damage to the wall! If you decide you’d like to arrange the stickers rather than leave it to your artistic children, there is a plan included with the pack which you can copy or adapt any way that you want. The lights really do work just by clapping or, occasionally, a high-pitched shriek can do the job.

The boxes stated that the batteries were included but in actual fact they were not, so you do need to buy them as well. The only other disadvantage is that the clock from the Tick Tock Teller turned out to be a little too heavy to stick to the wall effectively. We suspect that it was probably down to the texture of the bumpy wallpaper and silk paint covering it which made the clock have trouble getting a strong enough hold. The Lumiglow stayed up perfectly and is a definite hit with the children and adults alike.