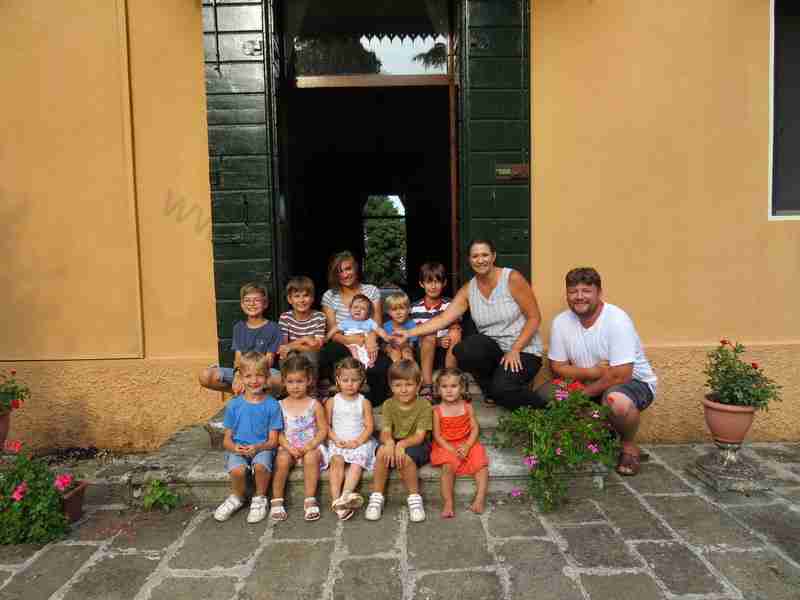 It seems like an eternity since we returned from Italy, getting straight back into continuing work on the house in preparation for selling. Although we have only been back since the end of August it seems ages since the photo above was taken.

Of course, if you are sitting there counting everyone you will notice that two children are missing. Ben was working at the tennis in Wimbledon before returning up north to move into new digs in time for his next year at uni. Steph was busy working as usual. Perhaps I’ll have to superimpose them into the photo.

Life since we returned from our time away reverted back to working on the house. It would be fair to say that I’m completely sick and fed-up of it all. I hate all the mess. I hate not having a place for anything and I hate the disruption. I hate how it is impinging on our already limited time. More than once I have ended up melting down because the constant work and juggling has pushed us to the limits. I want the house finished, I want it sold and I want to move. Now.

I know that we’re not supposed to say this out loud, EVER, but the kids are driving me mad. Disruption in the home, so much to do and so little time to do it all, everyone falling over everyone and everything else, and going from all the space we could want to… well, our house, means we’re all rubbing each other the wrong way. And you know, in Perfect Parentland, you’re just not supposed to admit that your kids are driving you up the wall and that you count down the hours until bedtime while you’re clearing up the breakfast dishes because that would mean you don’t like being a parent or you hate your kids or something. But hey, I’m a rebel and I’ve said it. It doesn’t mean I hate being a parent (not all the time, anyway), and it certainly doesn’t mean I hate my kids. It just means that they drive me mad sometimes. I am wary of any parent who claims not to know that ‘is it bedtime yet?’ feeling.

In fact, is it bedtime yet?

Oh, and you know of course that by saying that I am now leaving myself open to the ROETOF (Rolling Of Eye Tapping Of Foot) Brigade who will quite smugly remind me that I chose to have all those children. Let me correct you ROETOFs now; I chose to have children who didn’t scream, shout, fight, answer back, poop in their pants and create great defensive fortresses with their toys. I got this lot.

It was only recently that I took to Facebook to ponder that I should have perhaps given parenting a miss and maybe stuck to keeping a goldfish or two instead. My ruminations were cut short when Stephanie reminded me that our one attempt at keeping fish ended up with her killing them off. To be fair, she was only three-years-old and she thought she was feeding them when she dumped an entire loaf of bread into the tank. The bread absorbed the water, swelled up and covered the entire surface, leaving the fish unable to breathe. The fish were dead and the house stank so terribly that we had to send the fish to fishy heaven (down the loo),  yank the windows open and sought refuge from the stench of rotting eggs for the next few hours.

Parenting 13 children, home educating them, studying for my degree and running a business is tantamount to plate-spinning madness even with Mike’s fabulous help. More than once I have self-audited and it appears that I question my sanity on average thirty-jagillionty times a day.

The conclusion has been finalised.

The verdict is in.

11 thoughts on “Questioning My Sanity: The Verdict Is In”