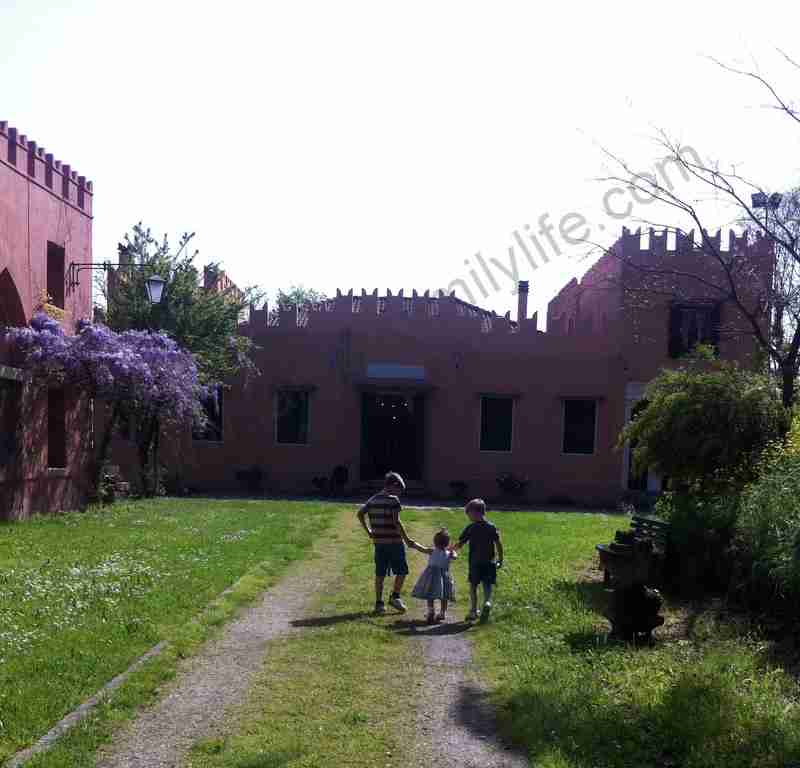 I knew we would be seeing several places during our time away.  Of course I knew it, I booked it all!  And I knew that I would probably prefer some places to others.  What I hadn’t expected was falling completely and utterly in love with somewhere, and for it to happen so early on.

Our stay in Torreglia came almost a week earlier than it should have done, after we were driven out of our first rental in Italy in less than 48 hours, but that story will come later.  Thankfully, the next property had not been rented out for the week preceding our booked stay, and so we are able to begin our stay earlier than originally planned.

Torreglia is a town in the Province of Padua within the Veneto region of Italy.  The town is kept scrupulously clean and neat and it seems that its inhabitants take great pride in their area too.  All the homes are well kept, the shops are tidy and well maintained – everywhere is looked after.

The town contains everything you would need; two banks with ATMs, a pharmacy, a supermarket, shoe shop, butcher and grocer, a couple of restaurants and bars, and the all important gelataria.

Yet, tucked just a stone’s throw away is Villa Zadra.

We had seen the photographs and read the description of the property yet still I hadn’t realised what a majestic place we had rented.  I had expected an ordinary house decorated to give a regal impression.

What we were actually faced with was a villa which had been built by a noble family of the Veneto region back in the 1700s, who needed somewhere to use as a holiday home and quite fancied one in the Euganean hills. So Villa Zadra was built and now we were the gob-smacked family about to stay in it.

Not only was the house spacious and beautiful, set within its own gorgeous grounds, but it also happens to be owned by the nicest guy in the world.  Yes, that’s his official title – or at least it is now.

Luca was our saviour on more than one occasion during our stay.  I held him up as an example to our boys.  ‘You see Luca?’ I told them, ‘I want you to grow up to be just like him!’

And I really do. Such a genuine, friendly, well-mannered and helpful man you would be hard-pressed to meet often.  We all loved him!

So, great house, fabulous gardens, lovely area, wonderful owner… can you see why this is my favourite place yet?!

Above the main doorways are quotes from Dante’s Divine Comedy.  The first quote we came across was above the doorway at the front of the house through which we first entered, saying ‘pero d’ogne trestizia ti disgrava’.  Very loosely translated this means, ‘therefore disburden yourself of all sadness.’

How fitting was this quote after the couple of days we had at the previous property!  And the reassurance of the words made me smile as I mulled them over.  This indeed was the place where we would disburden ourselves of all the stress we had been under.

This was where our adventures took a turn for the better.

We settled into the villa quickly.

The hallway ran from the front to the back, with large double doors opening at either end, making it the perfect place for me to sit and watch little people run in and out and through and back and all over the place in the vast space they had.  Even rainy days meant no end to the activity, due to the sheer expanse of the villa.

There were outbuildings – the equivalent of a garden shed but on a much grander scale – which were several times bigger than our own home back in England!

The hallway alone was huge, containing three sofas as well as a grand piano.  A grand piano in the hallway, could you believe?!  Neither could I and promptly sent Stephanie a photograph!

Downstairs also contained two kitchens, a utility room, two large bedrooms, two dining rooms, a living room and a toilet.  There were two staircases; one leading to two large bedrooms and a bathroom and another leading to yet another bedroom and bathroom.  This place is more than adequate even for our family!

The sweeping driveway which led uphill to the house was set within a stunning mass of buttercups.  If you looked closely enough you could see a hammock hanging between the trees!

Luca apologised for not having mown the grass in time for our arrival, but he had nothing to apologise for – it was so beautiful to see!

The gardens were perfect whatever you wanted to do, whether it was for the children to play, for the family to sit and eat in the sunshine, for us to talk with friends, or to just sit.

Every morning we would throw the doors open and listen to the cuckoos in the trees as the sun shone through the branches.

The views across the town were magnificent, and on a clear day you could even see the Dolomites in the far, far distance, way beyond the mountains you can see in the picture below.

The villa was set back enough so as not to be disturbed by the traffic running through the town, its presence being made known only by a white noise in the background rather than anything loud enough to disturb.

As our first full day was drawing to a close, I opened the windows to reach the wooden shutters in order to pull them in for the night.  It was 8.30pm, and as I reached out the bells from the church began to ring  out over town.

It wasn’t the ordinary ‘ding, ding, ding’ of church bells I was used to hearing. This was unlike anything I had heard before.

The bells were actually playing a tune and as they did so I stood, mesmerised and unmoving, until the very last note lingered over the town.

Every evening after that I was sure to stop whatever I was doing at 8.30pm to sit outside and listen to the bells put the town to sleep as the sun set.

As we pulled away from Villa Zadra on our final morning I was swept away by the feelings of sadness I had at having to leave.  I had never expected that I would love somewhere so much.  I had never felt that way about anywhere – even my own homes!

To feel such strong emotions for somewhere I had only expected to be a place to stop by was overwhelming and confusing too.  It was everything –  the villa, the area, the approachable and helpful owner – I was going to miss it all.

It turned out I wasn’t the only one.  The children were already asking about returning, and whether we had to leave at all.  There just seemed so much we hadn’t done or seen and so the decision was already made.  We would be returning.  And we are – next year for over a month!

If you would like to visit Italy and need a large accommodation to fit your growing family, with all the benefits of peace, quite and privacy along with the convenience of all a town can offer, there is really no need to look any further.  It’s only an hour away from Bologna so easy to get to by air if driving to Italy isn’t quite your thing.  You can also book safe with the knowledge that you will be extremely well looked after by Luca, and all for an unarguably fantastic price.

Click here to find out more about booking Villa Zadra and tell Luca we sent you!