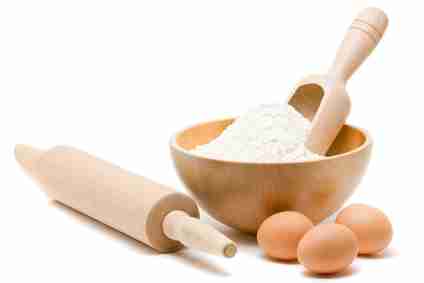 Our first three weeks in Italy have already created an undoubtedly loyal family of Italiophiles, loving the atmosphere, the scenery, the people and of course, the food.

Skirting our way through the markets, as far as skirting is possible with three buggies, we weave our way in and out of stalls laden with mouth-wateringly fresh pasta, a vast selection of olive oil and wines made from the local produce, and a tremendous display of fresh, locally-made salami and pancetta.

One thing is for certain, the Italians love their food.  Co-incidentally, so do we!

I have made a promise to myself to learn more and to try more.  But the problem is that it is sometimes difficult to find some ingredients back home the same as you’d find here in Italy, so I’ve been on a quest to find recipes which come as close to authentic Italia as possible.

Bread is a much-loved accompaniment to meals in the Med and so there are an assortment of different bread recipes of all styles and for all occasions.  The problem isn’t finding a recipe to try but trying to narrow it down.  At the moment I’m torn between trying the Pesto and Pepper or Olive and Herb.

Oliver’s birthday falls in our final week away.  We will have left Italy by then but we’ll still be in France.  He expects that his birthday cake will be waiting for him when we get back to France.  In order not to disappoint a soon-to-be four-year-old I have been trying to find a quick, simple yet impressive recipe for a delicious birthday cake for kids.  He’s a big fan of the film Tangled, and spotted Rapunzel’s tower many times during our travels so far – at least that’s how the distant churches seem to him!  Perhaps I need to try something along those lines?