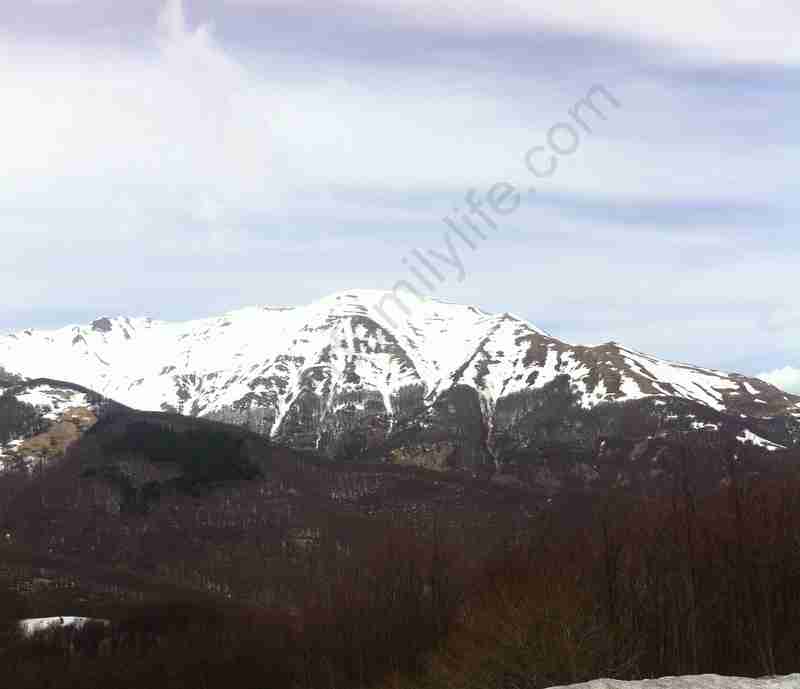 Internet connection has been limited so I have not been unable to update the site at all.  Now that we have settled in a different place we have working Mifi and internet (thanks to an unlimited data sim card provided to us by Holiday Phone), so we are able to update you on our trip so far.

I was going to start at the beginning, giving more details and information on our stops in Burgundy, the Midi-Pyrenees and Cannes.  Instead, as our first day in Italy has inadvertantly hit the headlines, I thought I’d begin there!

We had been in Italy a matter of hours, travelling through the Emilia-Reggio area of the country and heading toward the property we had rented in the Apennine mountains.

The mountains cover an area approximately 800 miles long from North West Italy down to the Strait of Messina.  The views are breathtakingly beautiful, the air is fresh and clean and it is an area left untouched by tourism.  The villages are simple and unspoilt, with traditional buildings many years old.

Beautiful as it is, the drive can be quite daunting for those not used to it.  Driving on winding, bending roads set high up within the mountains is not for the faint-hearted.  Many roads are narrow and the bends so sharp that they can prove difficult for smaller vehicles to contend with, let alone larger ones such as Jalopy.

The TomTom Sat Nav which we bought three weeks before our trip was informing us that we were very close to our intended location.  Being a brand new device, we had expected it to be accurate and up to date, and relied on it to take us around a country we were new to, in an area we were completely unfamiliar with.

The GPS told us to turn right into another road, set off one of the many winding roads within the mountains, which began as the one we had left had ended – narrow and barely large enough for one large vehicle, let alone two travelling in different directions at once.

As we travelled along it began to narrow more and more becoming bumpier and increasingly uneven as we went, with the drop alongside it becoming more precarious.  We realised we needed to get off what was now nothing but a dirt track but there was nowhere to turn.  We couldn’t back up as the track was too narrow, and too close to the edge to take the risk.  There was no room for us to turn the minibus either, so we had no choice but to keep going.

The track became so rocky that the bus was very unsteady – by now it was quite frightening.  We held our breath as Mike slowly inched the bus toward a small clearing which offered us the chance to turn Jalopy around and guide it back but as it slowly edged forward, bumping and rocking over the rocks and mud, beside a stream on the edge of a drop, the tyres stuck fast.

We were miles from anywhere.  The villages we could see were way off in the distance and reception wasn’t great so had difficulty connecting calls. /div>
Our breakdown cover stated that a breakdown in Italy would be dealt with by the local police.  We couldn’t speak Italian and had difficulty calling the emergency services to begin with.  We called the manager of the property we had rented (an English ex-pat living in Italy) to ask her to call the emergency services for help for us as she could speak Italian and we couldn’t, but she said that as she didn’t know where we were she couldn’t help us.  I text her the co-ordinates and she still didn’t call anyone.

We were unaware that she was instead posting insults about us online, then claimed she was not responsible for us and she wasn’t the RAC. We didn’t ask her to pull us out – only to call the emergency services for help.  Seems that the courtesy, politeness and consideration I would extend to someone in a similar predicament is lacking.   I do hope nobody ever needs medical attention when she is nearby.  As she is not a paramedic I would doubt she would help them.

The children were anxious and worried, as were we, but we needed to remain calm and to reassure them.  As a result the children, having had the situation explained and regular updates on what we were doing to get help, remained calm themselves.  We were so proud of them.
Mike began walking back down the dirt track to find help – the nearest village was miles away but he headed for it, leaving me to try to continue calling for help.  Eventually I managed to get through to the emergency services and a lovely, helpful lady called Patrizia who spoke English.  Whilst I gave our co-ordinates to Patrizia and she translated and passed them through the control room.
In the meantime Mike had miraculously come across two ramblers, who were walking back up the track in the opposite direction.  They too, spoke English and reassured us that they would call for help, which they did.  We do not know their names or where they were from but they were truly in the right place at the right time.
Eventually, the rescue team came along with the police.  We led the children off the minibus and to a safe area whilst the rescue team pulled the bus out.  After stopping for a quick photograph with the rescue team and the police (at their request), the children and I were then taken to the police station in their car.  Mike and another of the team followed us back.  The children were given drinks and chocolate by the police, and we were able to change them and freshen them up.

We will be forever thankful to the ramblers, to Patrizia and the control team, to the police and to the rescue team to pulled the bus from the mud.  They were all absolutely fantastic – we cannot praise them highly enough for their help and for the way they looked after us all.
We’ve since heard several versions of what had happened to us on our first day in Italy – many laughable and none are accurate – even those who interviewed us directly.  The stories we have read have given a far more dramatic story.  We were never faced with raging torrents, or swollen rivers, or performing a death-defying balancing act on a cliff edge.  Apart from feeling a little embarrassed but able to take it all in good humour, we are all fine.  One thing is for sure though, we certainly will never forget our first day in Italy!
As for us – well, we’ve made a pact never to drive down a road without tarmac again!  And to make sure we order our maps from Amazon in time for them to arrive before we leave!
Have you had any Sat Nav stories of your own?  We’d love to hear them if you do!