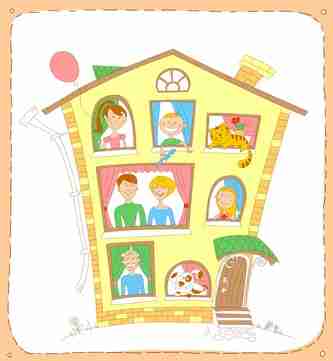 Today guest poster Michele writes for Larger Family Life about the challenges  of fitting her family of 12 into a smaller home after downsizing.

With ten kids in tow my husband and I downsized from a 3900 square foot, six bedroom, three bath house to a 600 square foot, one bedroom, one bath trailer. When we first decided to tackle this task neither of us was convinced that it could be done with all of us staying sane. We were, after all, the same family that had moved across the country to be able to afford our super sized dream home. We had all become quite accustomed to seemingly unlimited space and the ability to roller skate through the halls on rainy days.

When we started preparing for our move it was clear that the first thing that needed to be done was to lighten our load. Purging can be hard. We get attached to things and we worry about if we will need them in the future, or how we will afford to replace them later on if we do get rid of them. I got out pen and paper and went through our house room by room and wrote down everything large that could be sold and how much money I thought I could sell it for. Some things were hard to part with. Either I loved them or I couldn’t imagine my life without them because of their usefulness. I had to remind myself that most of the things we had weren’t worth storing long term, and that often times things get ruined when they are stored, so it was better to save the hassle of moving them, the expense of storing them, and instead make some money off of them. I took pictures and started listing the big items for sale online early on so that I had plenty of time to sell them before our big moving day came.

Next, I moved onto the daunting task of going through our home room by room and tackling clothes, toys, and household goods. This part was really hard. Not only was it a lot of work, it was an emotional toll to decide what to keep and what to get rid of. Over the days, or even weeks, that I spent going through the rooms I began to realize that we really did have too much stuff. I began by tossing out the obvious – worn out and stained clothes, broken toys, or toys with pieces missing, things no longer used, and duplicates. In the very beginning I loaded up anything that had value and hauled it to town to set up on a busy street corner for a yard sale, but over time what I was purging became less and less valuable. Those things I started sorting into a big pile, and when the pile got big enough to be worth another persons time I listed them online for “free – must take all!”

I learned that a massive purge isn’t for the faint at heart. It takes real guts to par down our lives from the things that bring us security. But those same things can be binding, too. We had accumulated so much stuff that I had been spending large portions of my time just managing it, and that was distracting me from actually enjoying my life and my children. After a while it became freeing to think of a life with less things to worry about and manage.

With our load finally lightened, we rented a moving truck and began our move. We rented two storage units – one for household things and the other for my husbands home based business. The kids had picked a few special, and small toys that they could bring to the new house with them. We had our dining room table, beds, bedding, towels, home school supplies, and the bare minimum for the kitchen. Anything that went into storage had to have enough value to justify spending money on saving it, or hold sentimental value

Fitting all twelve of us into 600 square feet wasn’t as bad as I feared it would be. We put up shelves on any available wall space. We stored clothes in tubs under beds, in the bathroom, or even under our mobile home. Every inch of that mobile was made to serve a purpose and hold something. We had three sets of bunk beds and one king size bed. Some of us shared beds, while others were lucky enough to get their own bed. There was no privacy to speak of, and even sitting at the dining room table meant taking turns or sharing a seat.

We all lived in that mobile for nine months, and while most people won’t be faced with such a drastic situation, the same ideas can be applied to any large family feeling cramped for space. I found that lack of space wasn’t so much about how many of us were living in how many square feet, but more about how many unneeded things we had accumulated. Having less really was, and still is, the answer.

Author bio:  Michele Dempsey currently lives on a mountaintop in Tennessee with her husband, ten children and a menagerie of animals. They now live in two mobile homes totaling just under 1600 square feet of living space.  Keep up with Michele and her family at http://mysticmud.blogspot.com/

If you would like to write a guest post for Larger Family Life see this page for more info or email us at family@largerfamilylife.com

Please note: If you wish to publish a professional post or advertorial linking or promoting a business, please contact us at family@largerfamilylife.com for more information and a copy of our media kit.