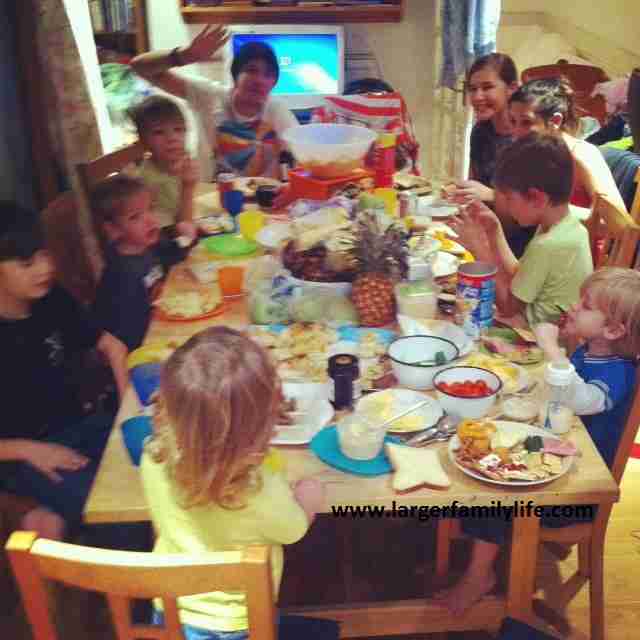 When I was a child and visited friends’ homes after school, meal times were unlike anything I was used to.

Instead of everybody in the family sitting around the dinner table, as I was used to doing, meals were often eaten from plates balanced on laps, sitting in front of the television screen.  You didn’t acknowledge anyone sitting with you.  Indeed, you didn’t even notice whether you were sitting with anyone or not.

I say often, but on thinking about it, not once do I remember anybody sitting with their family around a table.  Not being used to the balancing act myself, it took quite some concentration to keep my plate steady on my legs.

The novelty of eating in front of the television whilst perfecting the art of plate balancing wasn’t lost on me and I’d go home and ask if I could eat my dinner in this new, rebellious way.

My parents said no.

‘Dinner times are for family’.

‘It’s time to sit around a table and that’s what we do’.

And the worse one…

Sitting around that table.

What do I remember about it?

I remember that it was a time of talking, of laughing and sometimes of arguing too.

And it was so uncool and so unfair.

Mike, on the other hand, was a lap diner.

It was all he knew and he didn’t know mealtimes any differently, until we began dating and he stayed for dinner, faced with my family sitting around the table – Mum, Dad, and my then-snotty seven year old brother.

Despite suffering such traumatic unfairness at a young age I didn’t automatically rebel once I had my own children.  I didn’t rush off to purchase a set of plastic trays complete with cup compartment in the stance of an insurgent diner.  No, much to young-me’s unanticipated dismay we automatically, thoughtlessly, veered to sitting around a table at mealtimes.

It is such a small thing, such an insignificant thing.  It is a typically unremarkable, everyday habit that we have never really given much thought to.  Yet I have come to realise just how important, how significant and how big this ordinary little non-event is.

Until I sat and thought about it, I never realised how many of my childhood memories stemmed from that blasted table which we sat around.

All those conversations, those jokes, those arguments – all of which might never have happened had we been balancing trays on our laps, eyes stuck to the television screen in front of us, not even acknowledging who we were sitting with or if, indeed, we were sitting with anyone at all.

The memories are important.

As my own family grew so did our table.  We now have a twelve seater around which we all crowd.  No matter what we have been doing during the day or where we have been, and no matter how busy the hours had passed, the evening meal is the one time we will all be together no matter what – even now, when we all need to squeeze together more and rely on folding chairs to ensure we all have a seat.

It is a time of talking, of laughing and sometimes of arguing too.

I know that my children will look back on their childhoods and remember the times around the table.  I hope that they will raise their families with at least one meal a day where they are all sitting together.

I hope they don’t underestimate what a significant thing sitting around the table together is for a family – if only once a day.

And I hope they don’t waste the chance to make these memories with their families because they’re too busy balancing trays on their laps, their eyes stuck to the television screen in front of them, not even acknowledging who they are sitting with or if, indeed, they are sitting with anyone at all.

4 thoughts on “Family meals around the table”