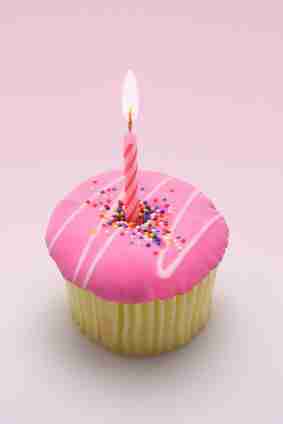 The day started early as usual, not because the twins had any extra excitement with it being their first birthday but because they (or to be more specific, Anna) has an aversion to sleeping in past 5am.

A couple of hours later we were also joined by the crew, busy filming the day for next year’s series and so a year on from capturing their birth we were lucky enough to have a very busy, very special first birthday day for the twins captured on film too.

Not only did we marvel at how much Libby and Anna had grown over the last twelve months.  Not only did we reminisce over how small they once were compared to how big and chunky and independent they have become but we congratulated ourselves on those double doses of sleepless nights, of getting through the fog and mist of twin bleariness that we thought we were prepared for but really were not.

The night before saw me baking two birthday cakes and wrapping a heap of presents in preparation for the big day.  The twins of course were oblivious to the reason for the fuss.  All the other children were excitedly anticipating what presents the twins would receive and discussing who would be helping them to decorate the cakes and open the presents – as helpful older siblings do.

We knew that the day would be filmed and also expected for some disaster or unfortunate event to occur in time.  My thoughts were that they would involve one of the boys.  It turned out that Libby, whilst practising her new-found standing skills would lose her balance and fall onto the cabinet, giving herself a nasty bruise and black eye in the process.

Not only did we have poor Libby’s bruised and battered face but Anna woke evidently under the weather and a little bit snotty too.  Great.  The two girls of the moment and each of them marked their first birthday in a different yet memorable way.  It just had to happen!

The children and I decorated the cakes in the morning, with the boys busy creating birthday banners for decorating afterwards.  By the time we sat down to eat our party lunch I was feeling more than a little pooped and worn out!

Presents were opened in the afternoon and a round or six of pass the parcel before the cake cutting made for a small, family gathering.  The only thing missing was Steph, who unfortunately couldn’t join us on the day as she had to work.  She managed to visit over the weekend instead and I’ll be filling you in on the results of that later this week!

In the meantime here are the birthday girls.