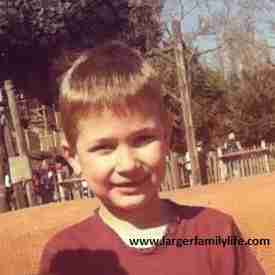 In our family the children’s ages vary greatly.  At the top we have Ben who is 19 and right at the end of the family (so far) are seven month old twins Libby and Anna.

Sid is six years old and looks up to Ben a great deal.  Whilst we realised he looked up to him as his much older brother, I didn’t realise quite how he viewed him until a recent conversation we had.

Ben is currently away from home working at Wimbledon Tennis.  He won’t be back for another month or so and we are all missing him greatly.

“Mum,” Sid began his question.  “When I’m older and Ben’s older can I have his computer?”

“Well, I don’t think so.  You see, Ben bought that computer himself so it’s not mine to let you have.”  I told him.

“No! No!”  Sid shook his head frantically in an effort to make me understand.  “I mean, can I have his computer when I’m older and he’s dead?”