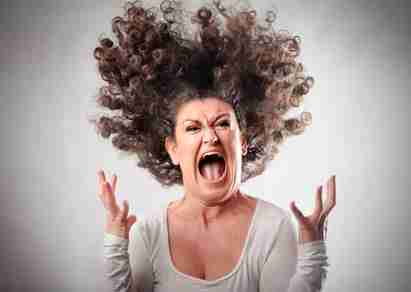 This isn’t actually a picture of me personally but boy oh boy, does she look how I feel.

Everyone in the house has been dropping like flies with some snotty, coughy, stomach-buggy bug during the last week.  We’ve gone through more toilet rolls and tissues than your average Andrex puppy and his siblings participating in a bog-roll race and everyone is miserable and grumpy.

Being a mum is tough work at the best of times.  It’s tougher when the kids are ill but how tough does it get when you are ill too?

I’ve been desperate for sleep, for some respite.  Yet still others need looking after, housework needs doing, meals need cooking and this site still needs to be kept ticking over.  Mike has been fantastic yet he needs to work too.  I have found myself meeting the end of my tether once again.  Repeatedly.  As a mum I am not meant to admit that.  As a mum of many I’m definitely supposed to because, according to many non-supporters (and my mum – so yes, the same thing), “Nobody told you to have so many children.”

Ah, pah!  Like the number of kids has anything to do with me needing to recover when I’m ill.

The thought of running away and booking into a local (or not local) Travelodge for a night or two has crossed my mind more than once.  If you wanted a figure I’d estimate it at 143 currently.  And that’s just this morning.

I’ve sat and explained i=prt to Cait.  We’ve worked on reading and the “sh” sound with Sid.  Eddie’s maths is taking a snail’s pace and Harry’s mind is everywhere but his workbooks.  Dinner is in the slow cooker. The bathrooms are cleaned and the twins are miserable, snotty, grumpy and wanting to be held all day long.

Paddy and Oliver and listening not to a single sodding thing I’m saying.  Joseph is opening the childproof gate as it is apparently only childproof until child reaches eighteen months old and Ben is still in bed, completely fed up with applying for jobs to no avail.

If I am supposed to follow the trend of Facebook and Twitter statuses where people insist how much they dote on and love their families I’m not doing it today.  I want to run for the hills is the truth of it.  Not because I don’t love my family or my children because I do but because sometimes, just sometimes, I feel a little overwhelmed.

And it’s not wrong to admit it even though we’re made to feel it is.

It’s ok to say we’re having a hard time.

It’s ok to say we’re not enjoying it very much.

It’s even ok to admit we aren’t doing a very good job (even though I’m sure we are, given we have to battle on in the face of adversity and bogeys and tummy bugs).

Sod it!  Let’s have a cup of tea and a biscuit, and hope tomorrow is a better day.

11 thoughts on “Motherhood: It’s ok to admit it’s not always sunshine and flowers”