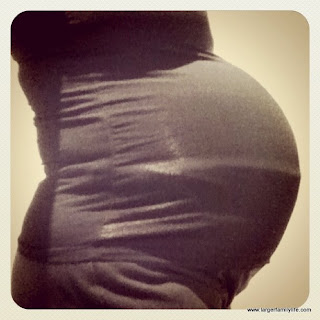 The last few weeks of this pregnancy are snowballing symptom-wise.  The tiredness is becoming chronic now, yet with various things going on resting daily isn’t always possible.  I’m taking snatches of the day to lie down on the sofa in the midst of toys and chatter and children.  The tiredness takes such a hold that it leaves me feeling sick and weak, although it’s probably more like my iron levels are doing that and also causing the tiredness in the first place.  I am also suffering from the most excruciating headaches at the moment.  I’m very much looking forward to Mike finishing on Friday so I can disappear to my bed for half an hour here and there if I feel I need to.  We had a busy couple of days at the end of last week, resulting in my falling asleep several times throughout the day yesterday and spending the best part of it feeling quite ill.

I have another growth scan coming up on Thursday this week to check on the babies.  I predict they’ll be weighing in somewhere around the 4lb mark each.  I am feeling and seeing plenty of activity so they seem to be doing ok in there, but it’s good to have the reassurance of this extra monitoring.  I also need to go and have another blood test done to check on my iron levels.  It wouldn’t surprise me if the consultant states that I need to go ahead with the iron infusions when I go back for my appointment next week.  I have mixed feelings, as never having had them before I am not sure what to expect, but I do feel like they couldn’t make me feel any worse than I do already.  This stage of pregnancy is getting a little tricky for me.

The Braxton Hicks aren’t letting up either.  My back has begun to hurt with the strain of the extra weight I am carrying (not just babies but possible down to excess ice-cream too), and I just feel like I’m one big, huge complaining lump.  I’ve also been feeling down for other reasons following a post I made last week.  Hormonal and over-sensitive perhaps, but the thought of a field in the middle of nowhere quite appeals at the moment.

Within the last couple of weeks, three women I had been following on Twitter have delivered their twins, one at 35 weeks, one at 36 weeks and one at 38 weeks.  I don’t think I’m following anyone else due before me which brought the realisation that I am next.  While I know these babies need a couple more weeks at least I think I’ll be sighing with at least a little relief to reach the 34 week mark, which is the goal everyone in the medical profession is giving as the point to get to in order to give the babies the best chance they can have.

I will report back after Thursday’s growth scan with another update.  For now, I’m off to deal with the housework… very slowly!