Just as I anticipated on Friday, the weekend did indeed fly by. Quite as expected, we managed to achieve very little, it seems. 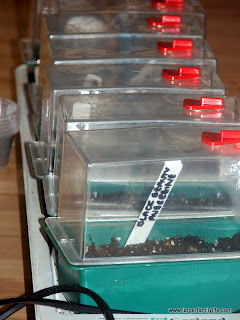 Saturday morning was spent sowing seeds with the boys. Our multi functional kitchen table became host to a collection of propogators, compost and vermiculite and the floor became host to a lot of mess.

A lot of mess.

That said, at least we managed to accomplish… something.  Seeds have now been sown for peppers, aubergines (eggplants), umm, some other stuff (I can’t remember and can’t be bothered to get up and have a look) and several varieties of tomatoes. Eddie and Sid, having received their own gardening tools and propogators took great delight in using them. As Eddie says “I am FarmBoy, you know!”.  Yes, Eddie.  Just without a farm. Still, small details.

There’s still a long way to go, and many more seeds to sow before spring comes, but just getting going made it feel like spring is finally coming closer.  Oh, I’ve said it before but I’ve very much had enough of winter.

There’s the minor detail of having to get to the allotment too and get that ready. We’re running out of time. That old fellow again. Time.

And of course, the afternoon did take us to a farm to collect our newest members of the family. 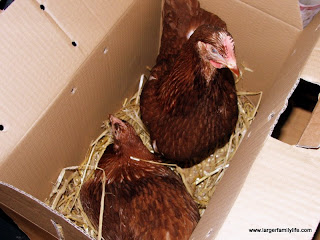 Our two new, as yet un-named POL hens.  Now we knew that we should expect some fuss and bother from our existing hens in response to having two new ones join them. We knew that the pecking order would need to be re-established and there would be a fair few tussles.  What we didn’t bank on is just how nasty these creatures can be!

The following morning, when they were all let out of their house into the run, the existing hens quickly realised things were different. Did they welcome their new visitors? Not on your nelly!  They each drew themselves up to their full height, clucking like, well, very loud chickens, and took turns to lash out at each of the new hens as they tried running frantically past them in order to escape.

We all watched from the kitchen window, with cries of “Ow!”, “Oh no!”, and several times someone would say “Should I go out there?!”.

The new hens have been driven to the perch, where they stay the whole time to keep out of the way. Occasionally, one or two of the hens (one in particular is really trying to get the position of Head Girl), will every now and then go up to the perch and show them who’s boss. It’s not them.

I was quite concerned at their welfare. They hadn’t been able to feed or drink since we picked them up and I wanted to make sure the pecking wasn’t out of hand. We let the existing hens out into the garden while I went into the run to check the new hens over. No blood drawn which is a good sign. Then, to discourage the old girls from pecking the new ones, I rubbed Vicks Vaborub over the new hens combs, heads, necks and backs.  Finally, as a treat, I boiled up some peas and sweetcorn for them, hoping it might give them some energy to retaliate a little.

We left the old girls out for a while, so the new ones had the run to themselves. A few hours later we let the others back in and the new girls immediately headed straight for the perch, after some more bullying had kicked off. Again we watched from the window with shouts of “Ow!” and “Oh no!”.  On the one had we felt terrible that this was going on yet on another hand we had to remember that this is nature. This is what they do. As soon as the pecking order is re-established in a few days it will all calm down and they’ll get on with life as normal. Until then, it’s just horrid to watch.

I shall keep you updated.

8 thoughts on “The weekend that whooshed”