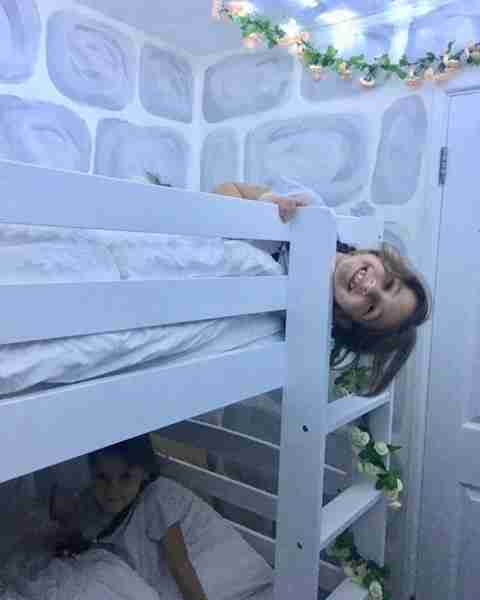 The last month or so has been busy as we took on the task of transforming the children’s bedrooms. Creativity was top of the list and I have to say, I have really enjoyed taking on the challenge.

First up, it was transforming a new room for the three youngest girls.

Here are some ‘before’ photos: 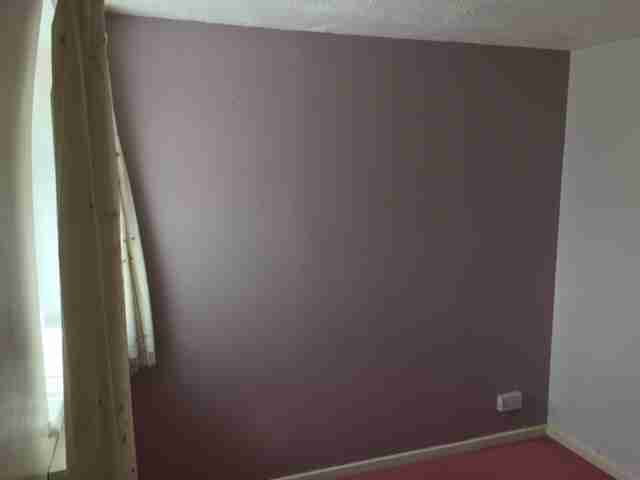 They were upgrading from their smaller room to one that, although is not huge, will still offer them more space than they previously had. 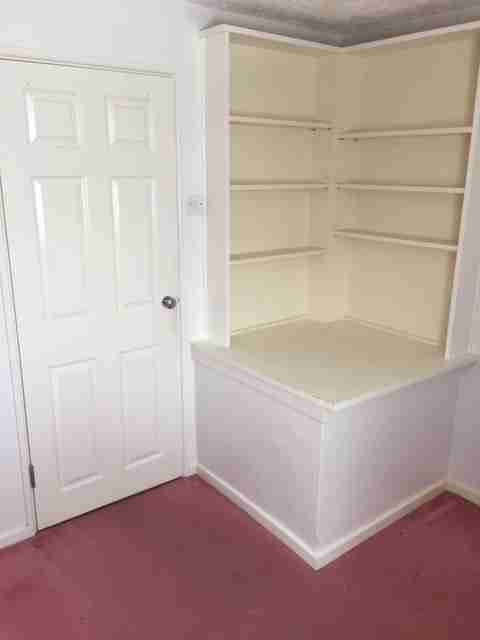 There were issues, such as the immovable block in the corner which houses the ceiling slope along the landing stairs. As you can see, it quite inconveniently takes up a substantial amount of space in the room and is something we have to simply work around.

What a pain indeed.

Mike had previously added a bookcase around it enabling Cait to use the top as a desk area. This had to go to free up as much space as possible so one of the first tasks was to remove the shelves. 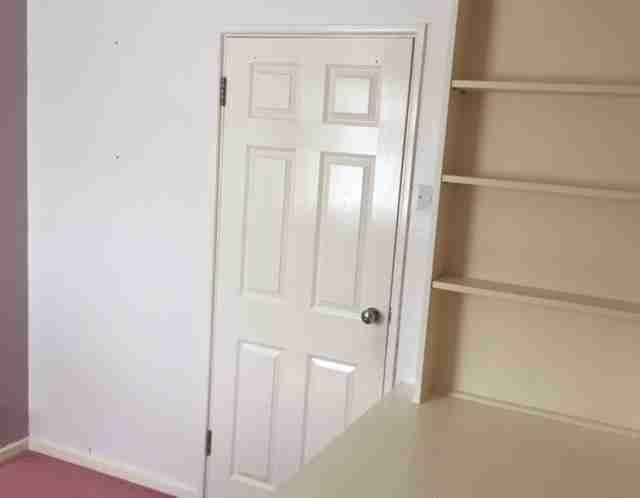 The requirements of the new room were as followed: we needed to be able to fit three beds within it. As well as this, we also needed to incorporate storage for both clothes and for toys, as well as leaving a little room for play. Not an easy feat with limited space.

And the girls were adamant that they wanted a castle bedroom with castle walls for them to be princesses in. 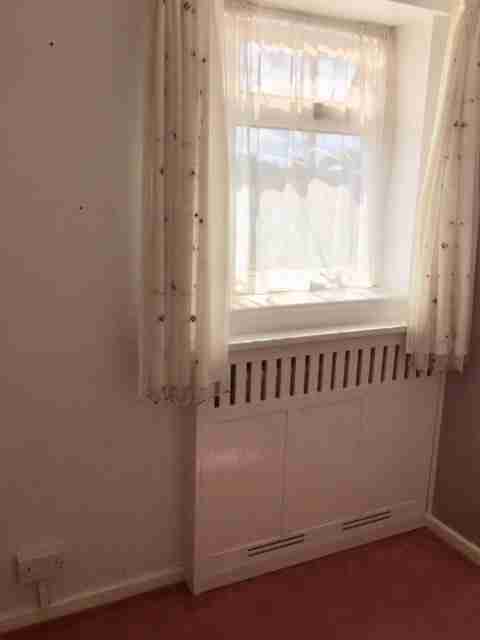 The walls were already lined and painted so a little patching up where the shelves and old radiator cover were removed meant we could crack on.

Ever wanted to create a castle wall? It is so simple, trust me.

How to Paint a Castle Wall Effect

First, you need to choose your colour scheme. I decided to go for greys, whites and pinks in the room, with a grey stone effect for the walls. Creams would also work well.

You need a lighter colour for the first coat which will cover all the walls from top to bottom. This will be the base which will form the mortar. We used the shade ‘Timeless’ from the Dulux range of paints. You’ll then need a mid shade and a darker shade.

Once the base colour is dry it’s time to draw out the stones. You can create large stones or small bricks. I am impatient so I went for larger stones so I could get the job finished faster without having to fiddle about painting lots of smaller brick details.

Use ordinary chalk to draw out the stones. They don’t have to be the same shape and they don’t have to be even. This is such a forgiving project for beginners to get creative with if you aren’t feeling all that confident. After all, the more rugged and bumpy the rows and the more unique each shape, the more natural the look.

Or so I prefer to think.

Anyway, I used yellow chalk to mark out the rocks as it was dark enough for me to keep track of what I was doing but not so dark that it would show up much once the paint was on. Unfortunately, that means that it doesn’t show up all too well in photos. 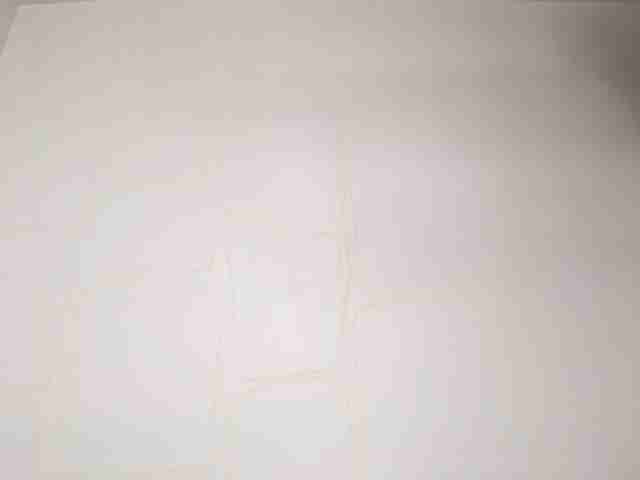 With the rocks drawn out on every wall, it is time to start painting them in.

The darker grey was the first colour up. I opted for ‘Chic Shadow’. 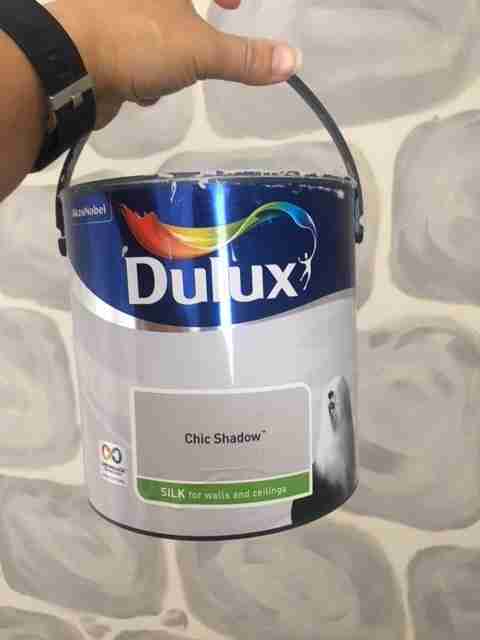 To create the stone effect, paint the left hand corner in a darker shade, brushing from the top left corner to the bottom right one, curving down through the centre as you go. 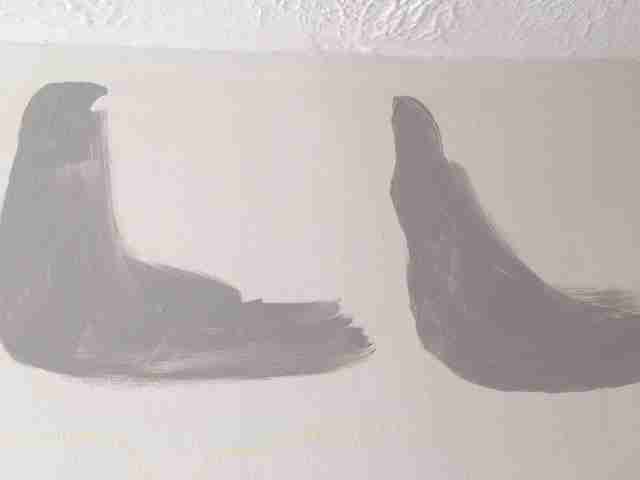 Then it’s time to open up the mid shade of colour. For this, I used ‘Polished Pebble’. 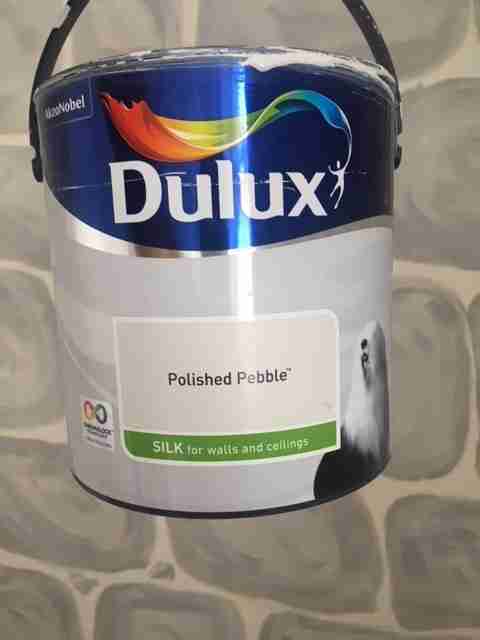 You need to paint in the opposite corner of each stone. You want to do this before the dark colour dries so that you can blend the two to create the stone shades. 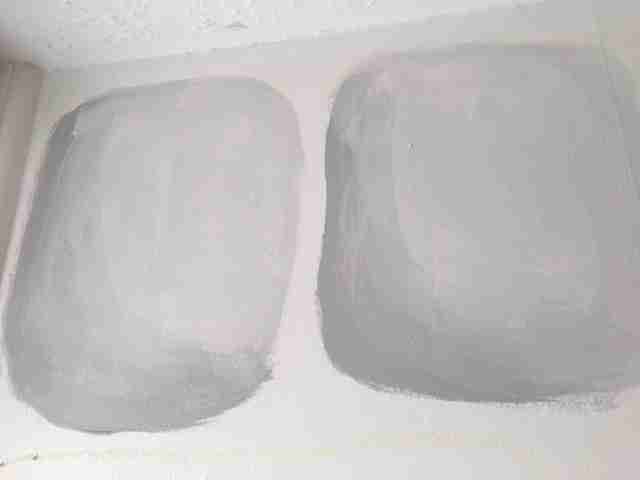 Go back to your darker shade and add on some brush strokes to create the shading patterns on the face of each stone. It looks far more complicated than it actually is. You will be pleasantly surprised at how easy it is to create this effect. 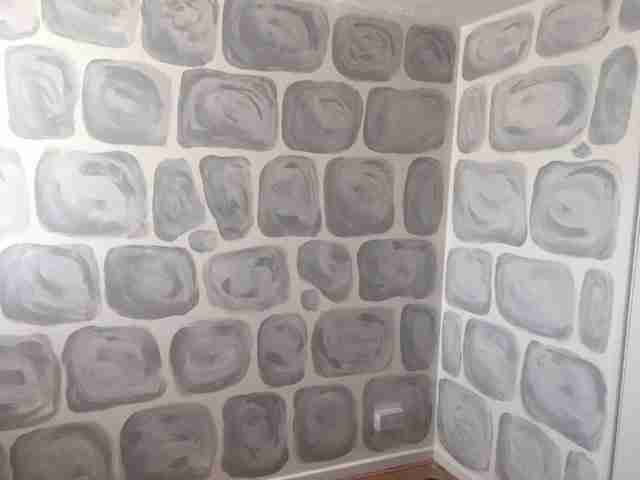 It took me a morning to complete all the walls. Of course, the kids had to come in for a peek. 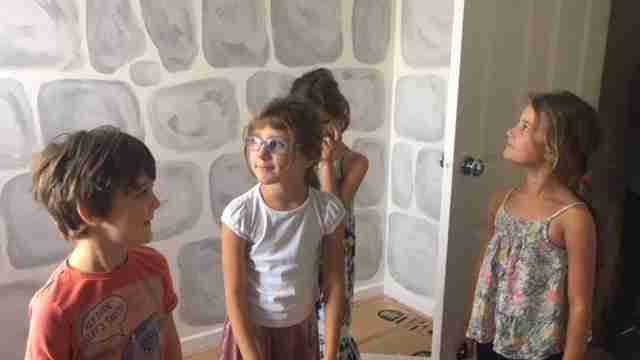 I wonder if Anna spotted the stone I missed filling in? I didn’t spot it until a day after I had taken the photo. I thought I might be able to ignore it but once I had noticed it, I could not unnotice it and it annoyed me until I went back and completed it.

Then I felt much better and could sleep easily again. 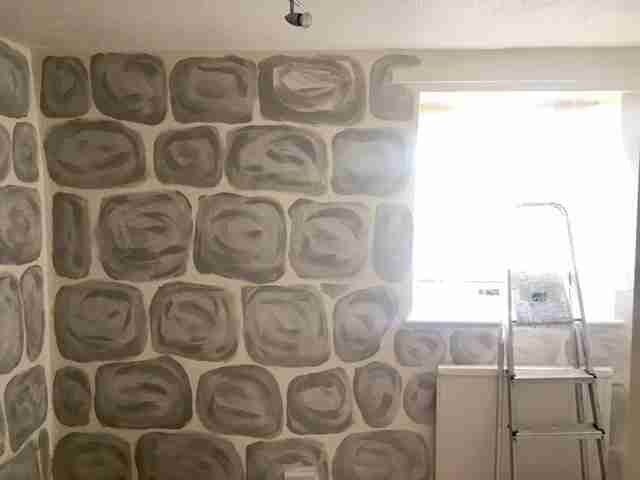 Next up, a net of fairy lights that would make the girls feel as though they were sleeping under the twinkling stars.

Yes, it was a bit of a tangled pain to put them up but we held on to the knowledge that it would be worth it. 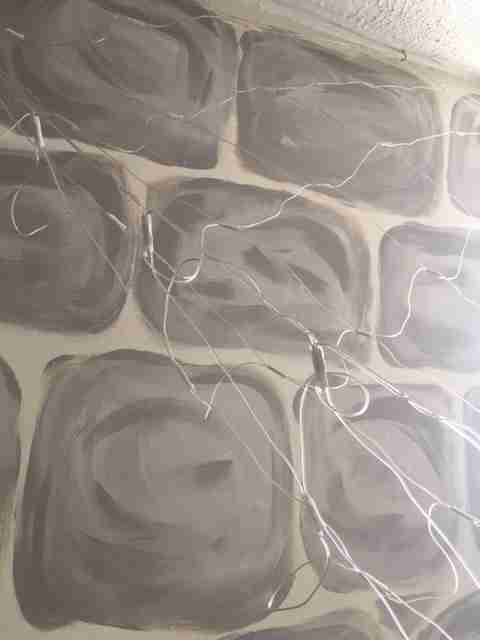 Trying to fit in three beds with the added inconvenience of the unusable corner took some consideration. We decided that we could best use up the space by fitting a loft bed along the wall above the block, although its legs did need to be cut down at one end in order to fit. 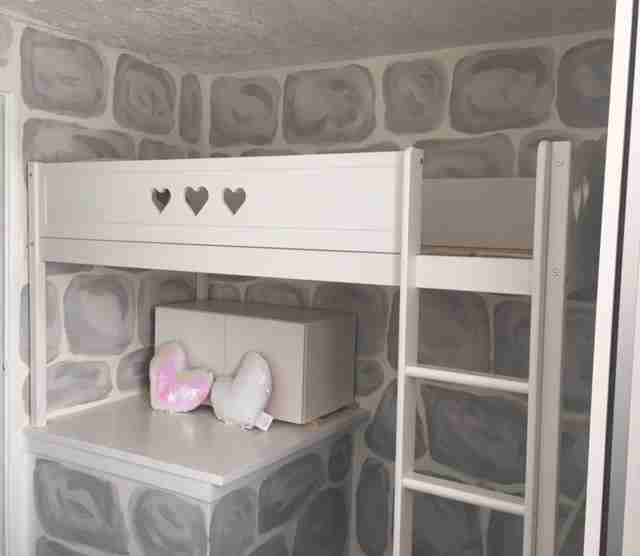 I had originally planned to incorporate clothes storage under the bed, but the high sleeper is tall enough that all the girls can comfortably walk under it. I decided to leave the little space they had available under it free as a valuable play area.

There was enough room between the foot of the bed and the wall that we could instead add a shallow-depth Pax wardrobe from IKEA to the room. Sliding doors meant we could make use of the full length and most of the height of the available wall without worrying about the depth of the drawers. 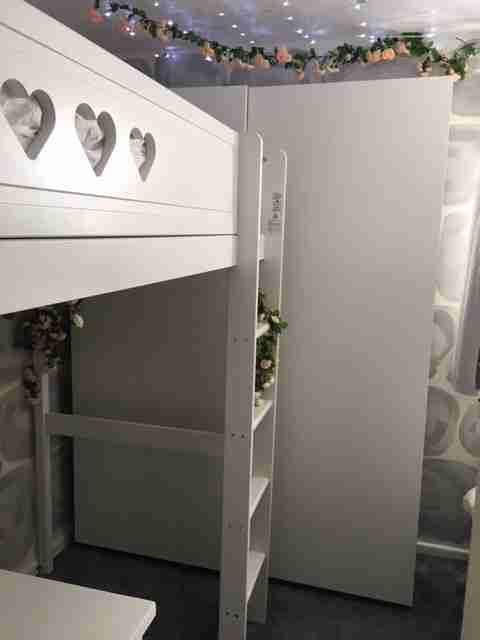 As it works out, the drawers can be fully pulled out without coming close to the supporting frame of the loft bed. Access to the far side of the wardrobe is a little tougher for adults, but nothing that a little contortionism and ducking doesn’t solve. Needs must, and all that. 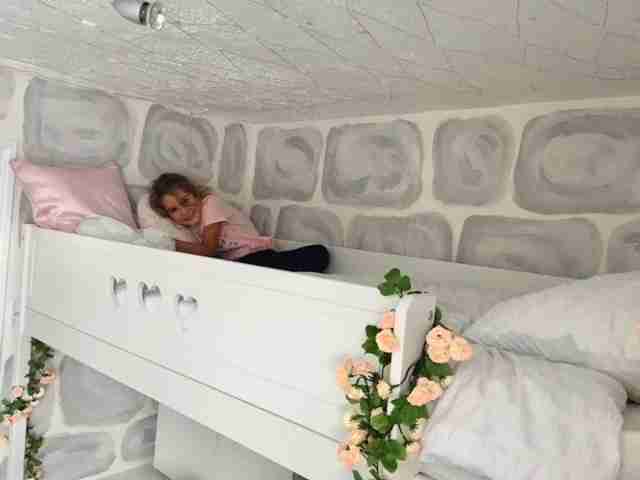 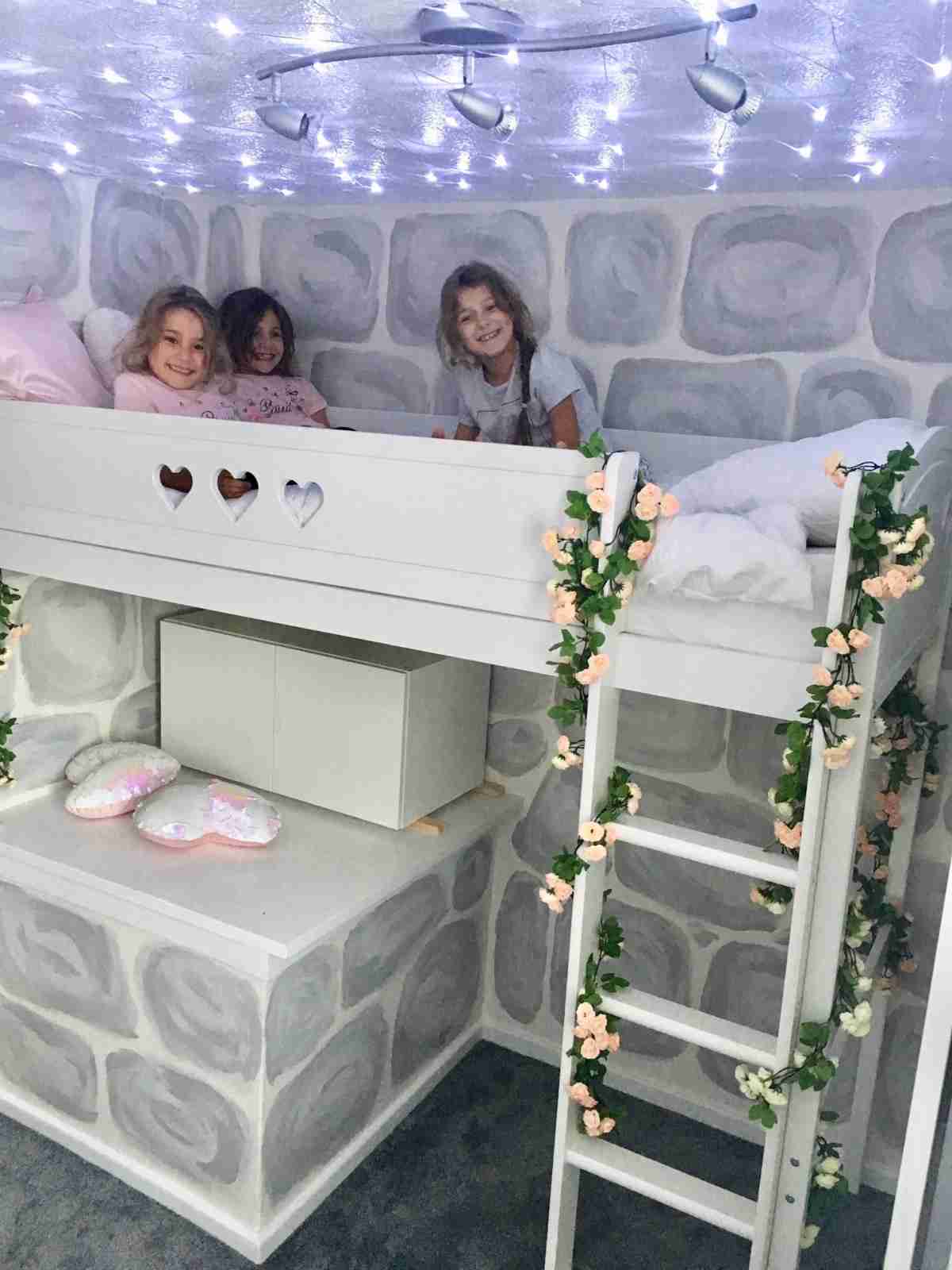 Then it was time to sort out a bed for the twins. This was provided by Furnish Your Home, who very kindly sent us a white Phoebe bunk bed to help us with our project. 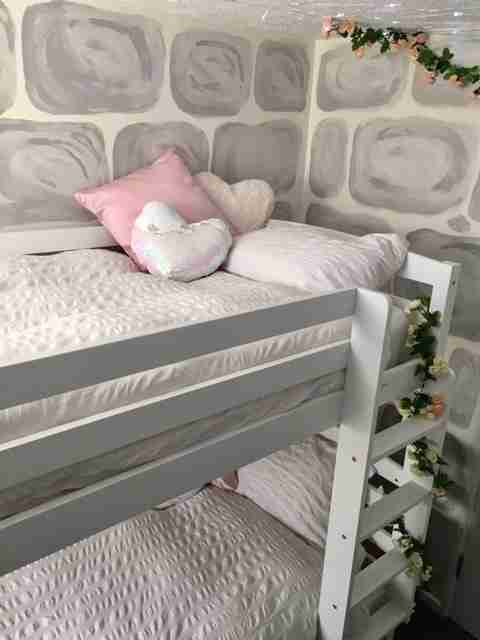 The bed was delivered in three packages which made carrying it all upstairs less of an effort than it would have been packed together. Securely boxed, all the pieces were also packed in a protective bag so they arrived in perfect condition.

The instructions were clear and easy to follow, and to make the bed even easier to put together, all the slats are also pre-drilled so were simple to fit.

It took Mike approximately an hour and a half to put the bed together. It took Anna seconds after the freshly washed, ironed and starched sheets went on to curl up into it. 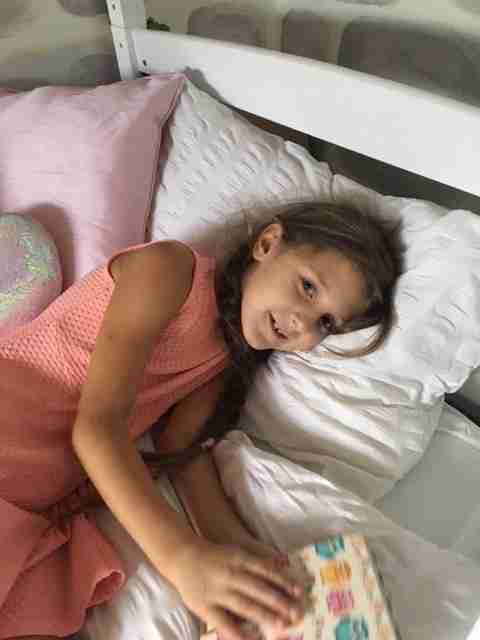 Pink and white rose garlands climbing up the beds and along the ceiling added to the princess feel of the room beautifully. 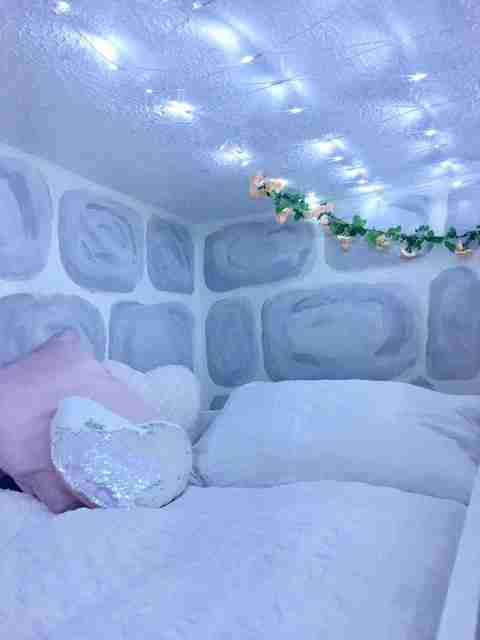 I bought a pack of Liderstar Glow in the Dark Stars and Moon Wall Stickers which, though had wonderful reviews, I couldn’t help but feel a little disappointed with at first. Despite having ‘activated’ the stars before sticking them up on the ceiling (and do note that they won’t stick very well if the surface is covered with silk paint), they did not seem to glow very well at all even after the normal ceiling light had turned off after being on a while. I didn’t use the large moon sticker. However, once the fairy lights were fitted across the ceiling, the closer proximity of the bulbs to the stickers seemed to do a better job of directly activating them and the stars do now glow much brighter once the fairy lights are switched off. 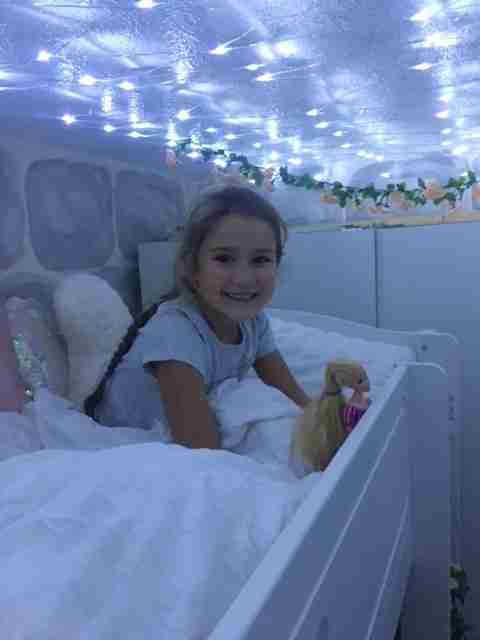 We were extremely pleased with the fairy lights and I honestly cannot recommend them highly enough. These are the ones I bought for the room.

They have several different settings which you can flick through easily using the handy remote control. You can also set them on a timer. They do give the room a magical feel, especially when the evening falls and the room darkens and, I have to admit, the urge to cover every ceiling with them has not yet passed. I mean, just look at how pretty they are! 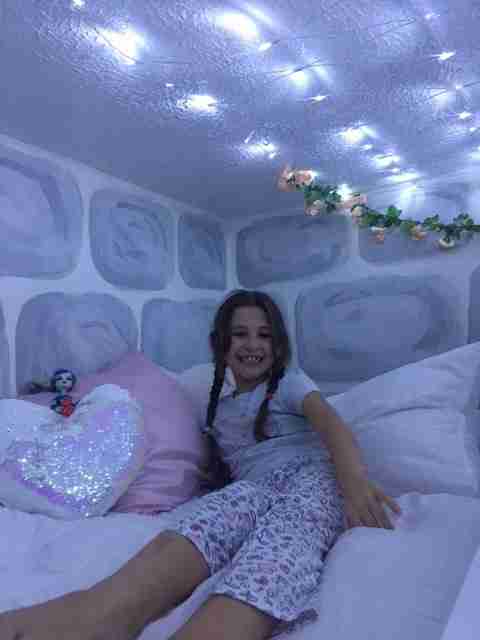 Let’s say, this was one bedtime that the girls couldn’t wait for! 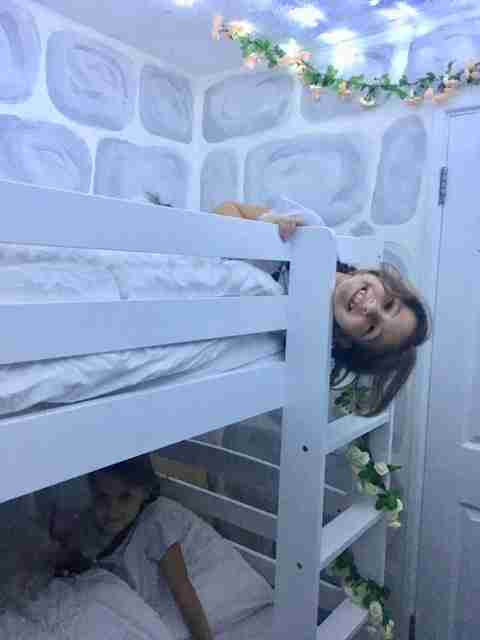 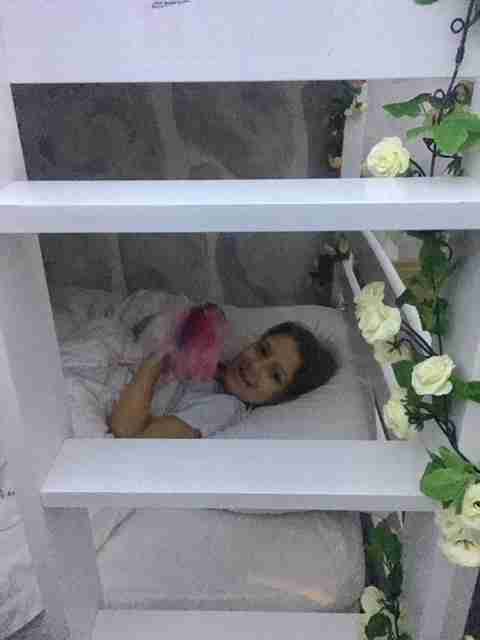 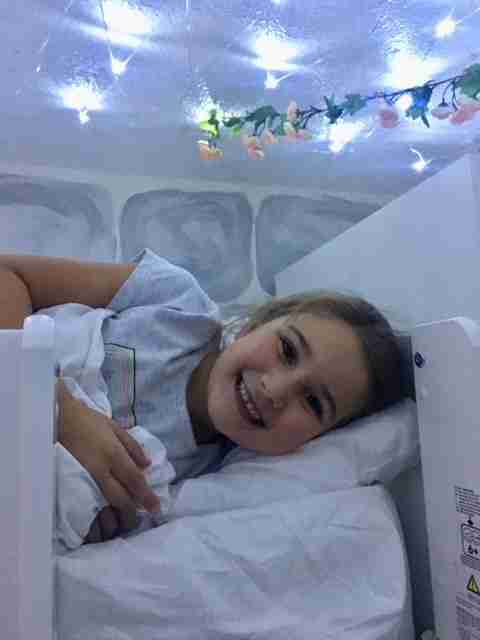 Next up, time for knocking down walls and painting up something MARVEL-lous. 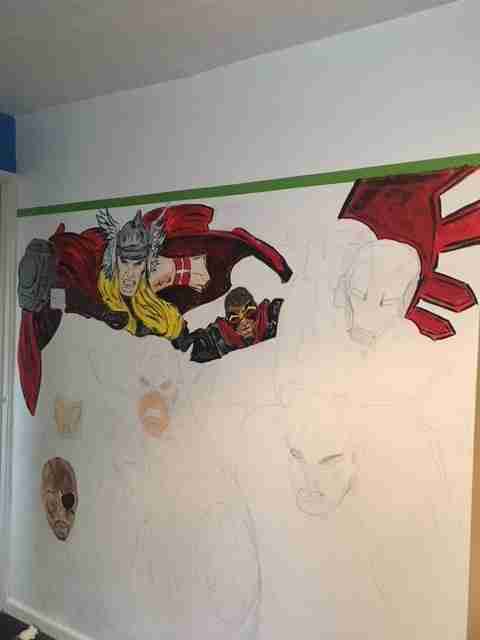 *Many thanks to Furnish Your Home for providing us with the Phoebe bunk bed for our project.