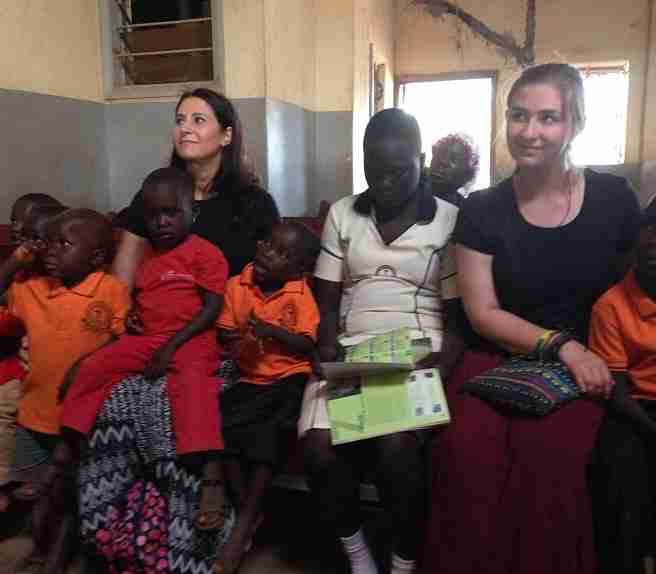 It’s sweet and makes food taste good and you can use it to make lots of delicious treats and cakes. What’s not to love about it?

I never gave much thought to sugar before my visit to Uganda. It’s a necessity in the larder cupboard and well, if you can buy it for less, even better!

But better for whom?

I never gave that much thought.

We left the singing, dancing children at the Compassion project in Katuuso in order to make our way east to the region of Jinja. A rural area sitting along the northern shores of Lake Victoria, Jinja is now Uganda’s second largest economy and the home of our sponsored child, Opisia Doreen.

The minibus threw up trails of red dust as we travelled along, tossing us up and down in our seats as we went along the uneven, bumpy roads. Uganda Compassion office worker and our guide for the week, Lillian, took the opportunity to brief us on the area we were about to visit, and to prepare us for what we would need to go through in order to reach the Kakira Compassion project that Doreen attended. The hillside community of Kakira, 15km northeast of Jinja, is home to approximately 62,000 residents. At its heart lies a sugar factory, Uganda’s leader provider of sugar, as it proclaims. In order to access the project and the entire community surrounding it, we can only drive through the plantation’s premises.

Whilst the project itself is not on the factory’s land, we would need to approach armed guards standing at the gates of the premises, requesting permission to go through this part of Kakira by road, the only vehicular access that seemed to exist from this part to the next. Without the factory’s co-operation, there would likely be no visit.

The factory, you see, is this area’s greatest influence.

The area on which the plantation lies is not small, spanning over 9,700 hectares within its own private gated development. A Truman-show style of a place, the development contains not only the factory but houses for the workers, hospitals, schools and shops. Casual labourers across Uganda and Kenya have migrated over to the plantation in order to seek much-needed work since its development in the 1980s from its previous sugar growing business, work which provides their families a home, education and medical care.

The plantation employs over 7,500 people from the community to work within it.

So what is the problem, you may ask?

After all, it is providing employment and opportunities to the local population.

Each worker is paid approximately 3,000 Ugandan shillings a day – that’s about 64 pence – a paltry wage even by Ugandan standards.

But a wage is a wage is wage, isn’t it? At least these people are employed and have some kind of income, however low it may be. You see, it’s one thing to earn a wage that you can then spend as needed, for whatever bills are needed. But when you are employed by the plantation, you live in their homes, your children attend their schools, you shop at their facilities and you are provided medical care by their own hospitals. The costs for these are set by the plantation owners and the compound, and are deducted from the employee’s salaries directly.

Shelter is given by the factory to its workers, the cost for which is deducted from their wages.

The worker’s children are enrolled in the plantation’s schools, the cost of which is deducted from their wages.

Even the employee’s lunches are priced by the compound and deducted automatically from their wages.

To begin with it sounds good. A person has a job, albeit a low-paid one, but it’s still a job and all their needs covered. And here starts the spiral – the spiral where the desperation for employment caused by poverty in the first place results in exacerbation of the poverty they are caught within, and the consequent entrapment that they find themselves in. By the time they realise they need to get out, it’s too late.

Because, remember, the wage is already very low to begin with. What if there are extra needs? Or the deductions are greater than the income?

Lillian told us of a gentleman she had met who had worked at the factory for more than 20 years and was moving on.

‘I don’t see anything I have done,’ he told her. ‘Even when I go I will not see these chairs.’ With never-ending costs dictated by the plantation being continually deducted, many of the employees are on desperately low wages, with some even taking home zero-total payslips. While desperation has brought them to the plantation in the first place, the realisation that a greater desperation is created comes only too late. By this time, they are trapped.

With nowhere to go, no money to go with and no other skills, workers are left with no option but to continue working for nothing, or even at a debt to the plantation. Desperation prevails, with the community turning to prostitution, alcohol production and theft in an effort to keep their families fed, clothed and their heads above water. The downward spiral continues, the repercussions spread and the negative effect on the community grows. Fewer choices and ways out leads to greater entrapment. Stay or leave, there is no choice. In this community, with either option poverty increases, desperation grows, health deteriorates and eventually, sickness and early death occurs.

With extreme hunger, grave illness and a high loss of family members, it’s the children that suffer here the most.

And though they work long, long days, the employees that remain have nothing to show for it. Many lack any other skills which they can utilise to create an alternative form of income. Even if they do, with no money of their own to escape with and start again in a new home away from the compound, for school fees for their children and to start a new business, they remain stuck in the compound as slaves in their own land and no way out.

If they remain, they have nothing.

If they leave through choice, they have nothing.

If they are made to leave, they have nothing.

Yet still, there is sugar.

I had never questioned the price of sugar before.

But, no strangers to spinning positive PR, the plantation boasts of its help in the community. It’s so easy to take at face value but, scratch a little way below the surface, and the realisation of why so many in this particular area are caught in this never-ending, ever-growing poverty trap is difficult to avoid.

Created under the guise of providing employment and a service to the community, this is how the entrapment occurs. Here is an example of how we remain unaware of the modern-day slavery that exists before our very eyes. Because there’s no two ways about it, this is exactly what it is. What makes it worse is that not only is the Ugandan government well aware, they are also joint partners of this venture.

As we drove through the compound I recalled  a scene in the film ‘Amazing Grace’ which tells the story of how Wilberforce led the campaign against the slave trade in the British Empire during the late 1700s. There was a quote by Barbara Spooner that stuck in my mind as we emerged through the gates past the slums lining the external perimeter of the compound.

‘I told my friends there was actual slave blood in every lump of sugar,’ she told Wilberforce.

Over 200 years later, who would think her words would still ring true?

Find out more about sponsoring a child through Compassion UK here