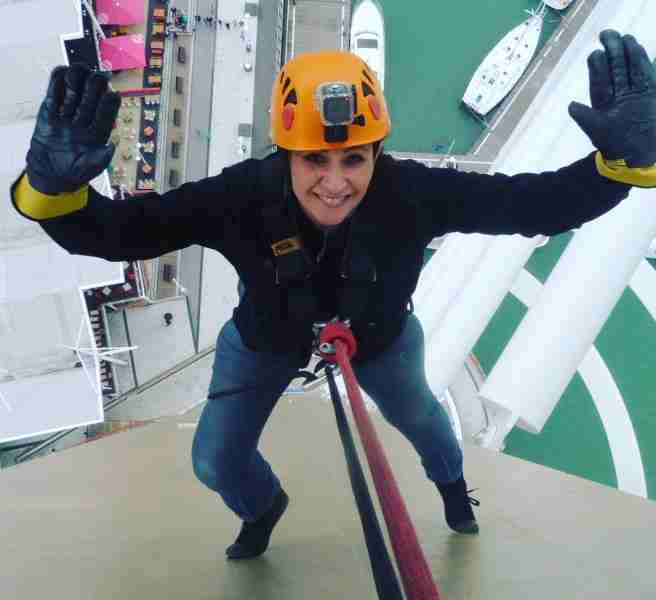 Continuing my quest to add more adventure to my life, I decided to take my abseiling efforts another step further. Moving on from my recent freefall abseil from the ArcelorMittal Orbit, last week saw me venturing off to Portsmouth to take on another challenge – this time from the Emirates Spinnaker Tower. The Emirates Spinnaker Tower was built as part of the centrepiece of the Renaissance of Portsmouth Harbour Project. It over looks much of Portsmouth including Portsmouth harbour, Gunwharf Quays, Portsmouth Historic Dockyard and the City centre, and can be seen from an incredible 23 miles away. The total height of the tower is 115 metres and, in order to withstand the high winds, it is able to flex by approximately 150mm.

This abseil attempt was slightly different to my previous one. Whereas the ArcelorMittal Orbit’s was an 80 metre freefall abseil, this one would be a 100 metre abseil down the side of the building.

And the weather was windier.

It was so windy that I doubted that the abseil would go ahead. Given that my original date for the ArcelorMittal Orbit’s abseil was postponed due to strong winds on the day, I was 99% certain that I’d be told, ‘Sorry, not today.’

No, not that day.

Before I knew it I was geared up and standing on the edge of the platform 100 metres up, ready to go. Here’s how it went:

Fancy a go? Abseils start at £90 with photos and videos added on for an extra few pounds. You can book your Spinnaker Tower abseil at www.spinnakertower.co.uk but be warned, places do fill up quickly.

In the meantime, do let me know if you have any other challenge ideas for me at family@largerfamilylife.com. Will your challenge be accepted?

Thanks to the team at the Emirates Spinnaker Tower for giving me the opportunity to participate in this abseil and for looking after me so well.