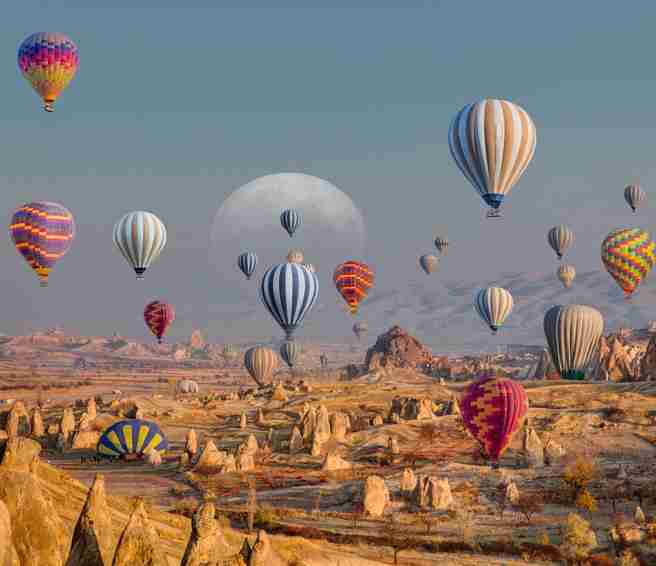 There is something about travel which is magical in itself, but some places are undeniably more storybook-like than others. With so much to choose from in the world, I’ve narrowed down five destinations that are, or were, on our family’s list. Read on for our pick but if you need any more inspiration click over here for a few more fairytale destinations to choose from. I have just returned from a week in Istanbul and on leaving, my cousin promised me that one day we would visit Cappadocia together. I am putting it in writing so that it becomes legally binding. Sort of.

Located in Central Anatolia in Turkey, nobody quite knows how old Cappadocia actually is. Packed with history, hundreds of underground caves lie hidden, leaving fairy chimneys towering high above them. Created by volcanic formations, these areas once held in the region of 20,000 peopleand contained their living quarters, their livestock, food store and worship quarters for months at a time. As if that isn’t magical enough, every day in the Cappadocian region of Goreme hundreds of hot air balloons take off creating a spectacular sight. I can’t help but think how incredible it would be to see this place from both land and air. It’s off Caitlin’s list but this place is still on my list of places to see. With a stunningly beautiful landscape and the northern lights making a visit every few nights, what is not to love about Iceland? Well, the cold, according to Cait when she visited in November a couple of years ago. She’s still complaining about it now.

Ever the storybook fan, she did enjoy learning about the Icelandic fascination with trolls, elves and hidden beings. The majority of Icelanders so strongly believe in these fantasy beasts that few decisions are taken without considering any annoyance that may be caused to them. Click over to Cait’s post here to learn about Gryla, the child-eating troll with 13 children. Then try and guess who Cait nick-named ‘Gryla’ shortly after*. Bet you looked at that picture and immediately thought of Rapunzel and Flynn in a boat in the Disney film ‘Tangled’. Every year, on the full moon of the twelfth lunar month, the Yi Peng Festival is celebrated in Chiang Mai. This festival is just one small part of the larger Loi Krathong celebrations. With the belief that the moon is at its brightest and the rivers at their fullest, locals believe that this is the optimum time to release their bright lanterns into the dark night sky over the Ping River, and make a wish for good fortune for the coming year. This one is still on the list. Towering over the town of  Shkodër in the northwest region of Albania, the ruins of Rozafa Castle sit high on a hill, 880 metres long over an area of nine hectares. We visited this fascinating castle earlier this year and whilst the ruins were extremely impressive, the one thing that stuck with me in particular was not the sight of the ruins but the story behind the castle itself, resulting in lies, betrayal and a mother’s love for her baby. Click here to read about the Woman in the Wall. Sitting high up on a hill above the German village of Hohenschwangau near Füssen, this palace was originally commissioned by Ludwig II of Bavaria. It was the King’s home until he died in 1886 and opened to the public shortly after. It’s probably better recognised from its appearance in the films The Great Escape and Chitty Chitty Bang Bang, as well as the familiar design of Sleeping Beauty’s castle which was based on Neuschwanstein.

This castle is still on the list but not for much longer. After Caitlin had harped on and on about wanting to see it for so many years, we decided to gift her a trip there for her 18th birthday in a few weeks. She and I will be visiting it together for the first time and, secretly, I’m possibly just as excited as she is.