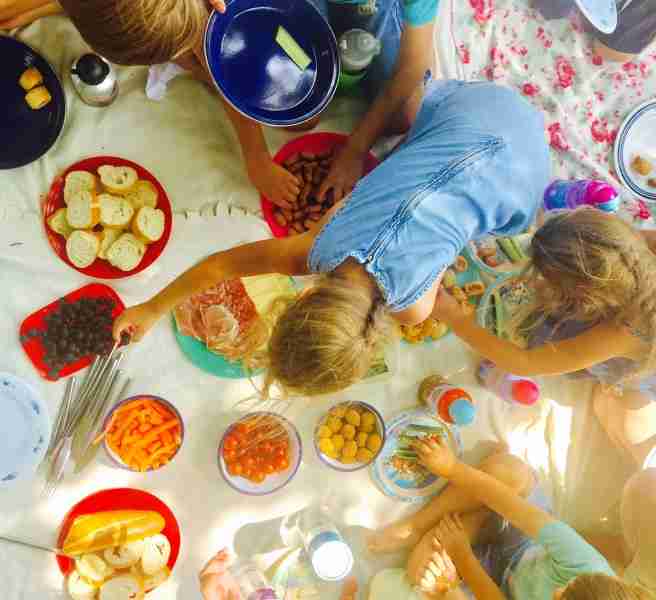 We are huge fans of the humble picnic. Simply throwing out a blanket to sit on and feasting on a selection of bread, cheese, salamis and veg in the fresh air is a hot favourite of ours, wherever in the world we might be. We’ve picnicked in the shadow of the Leaning Tower of Pisa, in a field in Albania, on a beach in Croatia and overlooking the Aegean in Greece. It’s convenient and there’s no need to worry about sweeping the kitchen afterwards either!

This year’s National Picnic Week has fallen at just the right time when it comes to good weather. Falling from the 16th to 26th June, we set off for our third picnic within the last few days. I think we’re doing a pretty good job of marking National Picnic Week, personally!

Today was spent at Knole, a medieval deer-park in Sevenoaks, Kent, and the inspiration for Virginia Woolf’s novel ‘Orlando’. This National Trust property was originally an Archbishop’s palace, having been built and extended by the Archbishops of Canterbury after 1456. Henry VIII hunted at Knole, Elizabeth I visited it and in 1603 it became the aristocratic treasure house for the influential Sackville family thanks to Thomas Sackville. Over the following 400 years the building was rebuilt with the National Trust finally acquiring it in 1946. A majority of the rooms were leased back to the Sackville family, ensuring they remained in their original form. Now, just under 20 rooms and the courtyard are accessible by the public including the Great Hall.

We have visited Knole several times but, quite apart from the magnifence of the building itself, is the sheer expanse of the grounds it sits within that we love. With more than 1000 acres it is a fantastic place to visit with children, allowing them to burn off as much energy as they need to in the most beautiful of surroundings. Of course, spotting one of the 350 odd deer that roam wild is always cause for excitement too! Whilst it is free to visit the grounds, you do need to pay £4 for parking and also fees to enter the Gatehouse Tower and Showrooms. Having said that, if you are a member of the National Trust you can gain free entry and parking.

We arrived and headed straight over to our usual spot, not too far from the car park and toilets but far enough away to have enough space for the children to run and play without (hopefully) bothering anybody else nearby. No picnic is complete without taking along a selection of games to play. You can get plenty more ideas and see more at mykidsneedthat. Today, I got to work getting the picnic set up whilst Mike took the children off for a spot of croquet…. …which Eddie was pleased to have won. A game of boules was also underway… …as was general energy-burning fun in the sun… The all-important deer spotting was also in action… Although, to be completely honest, the deer weren’t too concerned about keeping themselves hidden… There were attempts at tree-climbing… …and who can resist a little tree-hugging too? Until finally, it was time to eat. Picnics are great fun but they can also result in a great waste, with us using and throwing away disposable plastic packaging and products without much thought. In fact, more than 5 million tonnes of plastic each year, most of which is down to packaged foods, is used each year. Leading water filter brand BRITA are supporters of the Marine Conservation Society’s Plastic Challenge, and as a result have come up with the following ways to encourage people to swap single-use plastics for more sustainable products… So you see, small changes can make a big difference – both to the environment and your pocket.

You can find out more about BRITA’s range of reusable products and the latest updates on their plastic-free challenge by following them on Facebook at @BRITA.UK