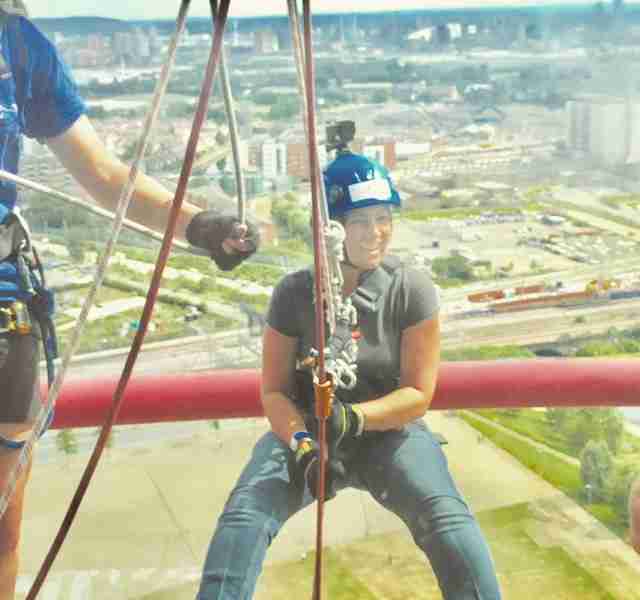 Whilst this weekend saw people flock to Stratford in East London to enjoy of blue skies, sunshine, shopping and a Guns’n’Roses concert, I took a trip over in order to attempt once again to abseil down the ArcelorMittal Orbit – the UK’s tallest sculpture – with Wire & Sky Urban Aerial Adventures.

It was my second attempt at taking on the challenge – my first visit just a couple of weeks ago was scuppered by strong winds. And so, here I was once again trying to psyche myself up to dangle from a piece of rope, 262 feet in the air. I wasn’t at all nervous in the run-up to the occasion. I suppose that, after the previous visit resulting in rearranging the abseil, I didn’t want to get myself too geared up to do something that would only be cancelled again. I didn’t have to worry this time as the weather remained warm, the wind stayed calm and there was nothing else to spoil today’s plans.

We met one of the team at the front desk where she handed out our consent forms to complete. Whilst Mike paid his £12.50 to be able to go up to the viewing platform from the top of the structure from where my abseil would begin, I went off to get kitted out on the ground.

It was at this moment that the realisation of what I was about to do hit me. I had only ever abseiled once before, many years ago during a school trip on the side of a cliff much, much lower than the ArcelorMittal Orbit.

This thing is high!

The ArcelorMittal Orbit was created after a chance conversation between then-London Mayor Boris Johnson and Lakshmi Mittal of ArcelorMittal, the world’s largest steel company. Johnson mentioned how great it might be to have a landmark commemorating the 2012 London Olympics and Mittal immediately committed to providing the steel required for the project. More than 35,000 and with enough steel to make 265 double-decker buses later, and the ArcelorMittal Orbit now stands as the UK’s tallest sculpture at 114.5 metres (376 feet), and I would be abseiling from 262 feet of it. Now here I was, being harnessed up in preparation. Lean forward and tighten the straps, we were told. The reason being that when you abseil, you do so in a seated position. If the harnesses are tightened from a standing position, when you bend your body up the straps will loosen. In order to ensure you are safely and tightly strapped in, you need to fasten them whilst bending forward. As a result, you then can’t straighten yourself up propertly and breathing is a challenge all on its own.

Then came gloves and the helmet. You can hire a Go-Pro camera which sits on top of your helmet and films your descent as you go for an extra £15. The SD card is given to you after your abseil. I haven’t yet transferred mine but I’ll update this post with the video as soon as it is done. Wire & Sky team member Jack then took us up to the top of the tower where he handed us over to the rest of the team who would be talking us through our ascent. As we went he asked each of us the reason we were doing this abseil. One fellow abseiler was doing it for charity, another had been given a gift card by his wife for his 65th birthday. I was doing it as part of a promise I made to my brother before he died.

A promise that I would have more adventure.

This is not something I would even have considered doing a year or two, before I lost more than four stone in weight – again thanks to encouragement from my brother. Now, feeling fitter and better than I have done since my early twenties, it’s time to step out of my comfort zone and live a little more adventurously.

I’m not so sure that this is what Jimmy meant by having more adventure.

The weather was hot with the temperatures hitting 29°C so adhering to the dress code (keep shoulders and midriff covered, no shorts, no loose clothing and trainers or boots that won’t fall off) and being tightly strapped into the harness, topped off with helmet and gloves soon had body temperatures rising even more.

Well, it was that or the thought of putting my entire faith into the Wire and Sky triple safety system. People at the bottom of the Orbit looked tiny. Over to one side was the London Stadium where Guns’n’Roses would be playing, and the Aquatics Centre was in view also.

In fact, 20 miles of the surrounding area was in view all around. And I was here, up high, getting ready to freefall abseil down… And finally, it was my turn… …my time had arrived… I can’t remember the name of the member of the team who was talking me through the abseiling procedure as we stood on the ledge. All I remember thinking was how high I was… The worst part was undoubtedly leaning back and putting your faith into the ropes. Despite the thorough safety checks and instructors reassuring, encouraging and ensuring your safety at every step of the way, to lean back from a building and let yourself leave the security of a stable base, trusting only your harness and ropes with your life is truly an indescribable experience… Once the realisation that the ropes were actually supporting you just fine, the sick feeling that momentarily hit me as the time came to lean back from the ledge had now subsided and I could enjoy the view… A view that was really high but beautifully far-reaching… You can go as quickly or slowly as you like (or are able to) and my abseil took about ten minutes or so to complete. It wasn’t difficult to guide the ropes to lower myself and, at times, I was content just to hold them tight and hang in the air, enjoying the view surrounding me… In actual fact, it didn’t seem to last very long at all. Reaching the ground had me experiencing a mixture of relief rather than exhilaration, before giving way to crediting myself with the fact that yes, I did it! I actually did it!

I, Tania Sullivan, mum-of-13, abseiled from the UK’s tallest structure.

The quiet pride that I had managed to do something that I really didn’t know I would be able to, not being a fan of heights in the slightest, soon gave way to wondering and planning, and the urge to try another challenge pretty soon.

I wonder what adventure I can find next?

Want to abseil down the ArcelorMittal Orbit?

Wire & Sky offer abseils for those aged 14 and over at a price of £85 each. Go Pro cameras can also be provided for an additional £15. Under 18s need parental consent and adult supervision. Available slots are booked up quickly so don’t assume you’ll get to have a go if you turn up on the day – do book beforehand to guarantee your abseil. There is a weight limit of 19 stone and you can’t participate if you are pregnant or under the influence of alcohol or drugs.

If you would like to try a Wire & Sky ArcelorMittal Orbit abseil for yourself, or a climb on the roof of the 02 or a ride along Wembley on a zipwire, take a look at their website for more information.

In the meantime, if anyone else has a challenge for me to do in the name of adventure, do drop me a line at family@largerfamilylife.com and let me know!