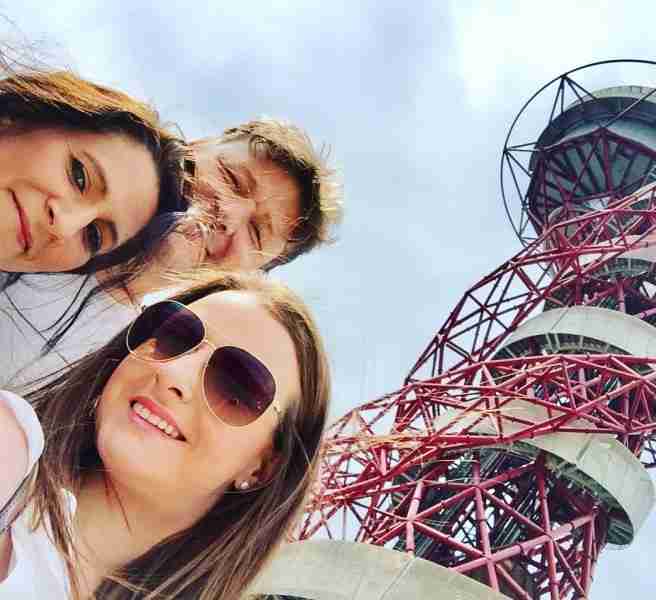 I admit it, I was particularly pleased with myself in coming up with that post title because who doesn’t love an alliteration?

Mike and I set off early on Saturday to make it into Stratford in plenty of time for my midday abseil down the ArcelorMittal Orbit with Wire and Sky. We walked the 3 miles to the station, mainly because we’re still trying to get our exercise mojo back and also because we planned a celebratory post-abseil drink or two with the rest of my abseil support team (a.k.a my sister-in-law Emily), so knew we’d be getting an Uber back from the station later that day.

The weather was beautiful. I couldn’t think of a nicer, brighter day to throw myself from the edge of the UK’s largest sculpture. Before we left I made sure I gave the children some important last words that they should remember me by, should the worst happen. ‘Your rooms are a hole. TIDY. THEM. UP!’

The blue skies gradually became cloudier as we walked until finally, when we were within a couple of hundred yards of the station, the skies decided to open and embrace us with a downpour. We decided against sheltering under a tree and made a run for the station instead where, bedraggled and sodden, we squelched our way onto the train. With soaked clothes and shoes that were wet through, we hoped that would be the end of the weather demon’s activities for the day as we left the train. I took a deep breath as I finally came face to face, for the first time, with the structure that I would be shortly be dangling from. Alas, it was not meant to be.

Over the next hour or so as we waited for my allotted time, the development of 35 mile per hour winds at the top of the tower occurred resulting in the rest of the day’s abseils being called off. Despite what you may think, I was a little disappointed. We had all made an effort to get there and I had psyched myself up to do the abseil but you can’t control the weather, after all. Not ones to waste the rest of the day, we heroically decided on dinner and drinks instead – after I had rearranged my abseil for the 17th of June, that is. For those of you who have been keenly waiting for news of my daredevil antics and are sitting staring mournfully at your screens at my lack of adventure – and I am sure there are many of you (possibly as many as two) – you need not be disappointed. Tomorrow morning will see Mike and I waking at 4am.

No, that is not the challenge.

The early start is in order for us to take an early morning hot air balloon ride over Kent, weather permitting. Neither of us have ever done anything like this at all so we’re very much looking forward to it but I have to admit, I’m a teeny bit nervous too! You can follow us on Twitter (@largerfamily) and Instagram (@largerfamilylife) to see how we get on!