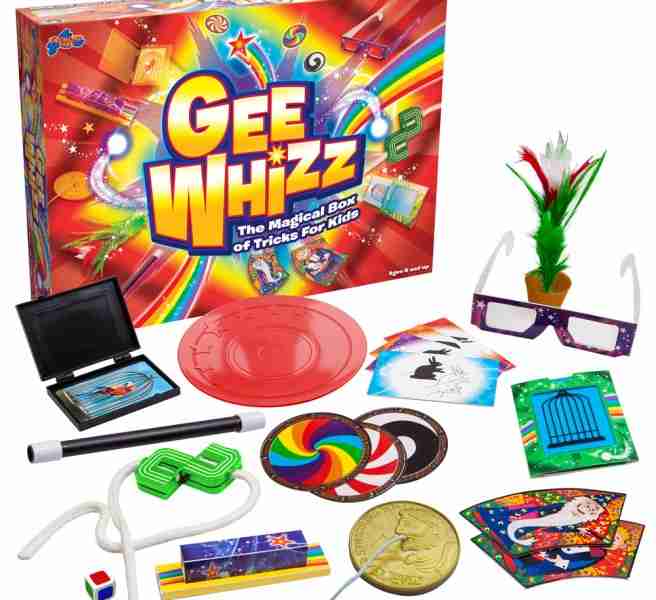 Something that Drumond Park have always been good at is including every member of the family, young and old. This is apparent not only in their board games but also in their more hands-on games such as Gee Whizz.

It’s the must-have game in the lead-up to Halloween and unlike Drumond Park’s other magic sets, it’s been designed with children aged 5+ in mind so that the often-forgotten youngsters don’t miss out on the fun. From growing flowers out of the end of a wand to previously empty saucers suddenly having coins tipped out of them, there is no end to the amusement.

Gee Whizz is the perfect magic set for younger children as they can easily master some baffling tricks with only a little or even no help from an elder sibling or relative. Children’s natural curiosity makes this box of magic tricks the ideal activity for them as it means they’ll pick things up surprisingly fast.

Our kids loved it, they were mesmerised by the illusions and we were gathered into the living room more than once for a magic show! It kept them entertained for long periods of time and it was something they could play both in a group and separately, so boredom was completely banished. As the weather starts to get more and more miserable we can see them playing with this magic set more often – which means we’ll likely be sitting through many magic shows this winter!

Drumond Park games always come with understandable instructions and Gee Whizz was no exception. Each activity was explained clearly, with pictures to help get the point across. With the varied tricks, mysterious illusions and easy explanations, this is by far the best box of tricks for young children we’ve ever owned.

You can purchase Gee Whizz from Amazon here (RRP: £19.99), or alternatively visit Drumond Park’s website for more information and stockists.

We’re also giving away three sets of Gee Whizz. To be in with your chance of winning, simply enter your answer to the following question into the comments below.

From what age is Gee Whizz recommended for?

I have entered to win a game of Gee Whizz with Larger Family Life. Follow @LargerFamily & RT to enter!

211 thoughts on “Review: Gee Whizz and your chance to win!”