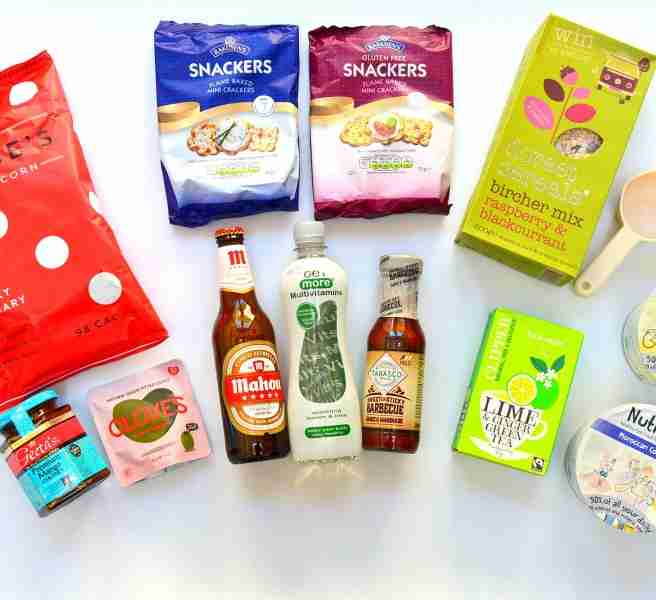 The last week of one month and the first of the next is the time for the new Degustabox deliveries to be landing on the doorstep. Without further ado and in true quiz show host fashion, let’s see… what’s in the box! It’s been one of those days/weeks/months (again) so I’m starting with the alcohol. I make no apologies, especially since I can add a splash of lemonade to this lager and call it shandy. Or I could just claim it’s shandy. Or just admit I’m drinking beer. Out of the bottle. Classy gal, that’s me.

Get More Multivitamin Drink worth £1.45 This is a natural spring water drink that is fortified with vitamins and says it’s sugar free. The bottle is simply designed and the concept is simple enough: ‘a low calorie carbonated lemon and lime flavour drink with sweetener and added vitamins and minerals’. I don’t find myself persuaded however, by drinks that claim to be sugar free but then state that they include ‘sweeteners’. I’d rather have real, natural sugar than a synthetic sweetener. If you aren’t as pernickity about such details and you like a citrus water drink with a bit of fizz, you’ll enjoy it as admittedly it does actually taste good.

Tabasco Sweet and Sticky Barbecue Sauce and Marinade worth £1.99 This is a great little marinade to keep to hand for coating chicken or ribs. You can also use it as a dip too – add a little hot Tabasco for a an extra kick if you like a bit of heat. As a bonus, they’ve also included a 50p off voucher in the Degustabox too. Lovely! ‘Healthy Fast Food for Life on the Go’ apparently. I don’t know what the nutritional difference is between these and a Pot Noodle but it’s the same kind of idea; a pot of dehydrated ingredients that you zap into life with hot water. Claiming to be packed with protein, fibre and taste, each pot is supposed to contain 50% of the 28 vitamins and minerals your body requires daily. Handy to keep in the cupboard for a healthy lunch or snack at work or at home, these will help prevent you falling into the biscuit tin when hunger strikes and time is limited. As the above but I should have pointed out that Nutripot do more flavours. Moroccan Couscous is one of them and you also have the choice of Chicken and Mushroom Noodles, Pasta Bolognese and Quattro Formaggi. The only green tea I’ve really been a fan of is the carbonated one that turned up in a previous Degustabox a few months ago but I actually found this a little more palatable. I don’t know if it was the twist of lime or the addition of ginger that made it so but either way, it was okay to me. I don’t know that I’d buy it regularly but I wouldn’t turn it down if it were offered to me either. This was my absolute favourite in this month’s Degustabox. Bircher muesli requires soaking in apple juice overnight then topped with yoghurt. It can also be prepared over half an hour in the morning but it won’t have quite the same effect. The combination of finely milled oats and dried fruit together with soaking creates a creamy, chilled muesli for a delicious start to the day. The Dorset Cereals scoop that was also added to the Degustabox was a novel addition. Thanks, guys! Oh, and it’s nothing to do with the product itself really but I do want to win the campervan competition on the back of the box so if you could remember my name there, oh kindly folk at Dorset Cereals… I’ve been tucking into these as a type and actually, they are pretty good. The pack is quite small but is well filled with olives seasoned with garlic, oregano and chilli. At first you think they are just ordinary olives with a little flavour but the chilli then kicks in at the end and gives your tongue a pleasant tingle. I thoroughly enjoyed it and would definitely include them next time I needed to take along a lunch on the go. This chutney is delicious. I didn’t cook with it because I kept spooning it onto chunks of cheese and crackers instead. Heaven. Oh yes, not one but two, yes two bags of Snackers were included in this month’s Degustabox. The plain flavour has an rrp of £1.29 whilst the gluten free version has a slightly higher rrp of £1.49. Both are tasty and go well with cheese and chutney above and have a calorie count of only 7 per cracker. Despite what you may be led to believe, I do now, for the most part, like to watch what I eat. Popcorn is quite a saviour when I fancy a treat but don’t want to undo all my weight loss efforts so far. Willy Chase’s range of popcorn are grown and made on a Hertfordshire farm. With flavours like Smoky Bloody Mary and Apple Cider Vinegar, rest assured that this is no ordinary popcorn!

August’s Degustabox had a cracking value of £21.27 which you have to admit is not bad at all! This month’s winner was definitely Dorset Cereals Bircher Muesli closely followed by the Willy Chase’s Bloody Mary Popcorn because who doesn’t like alcohol flavoured snacks?

A Degustabox subscription is pretty good value, providing you the opportunity to try out 10-15 products each month for just £12.99 including delivery. This month you can order your Degustabox with a very-massive-and-not-to-be-sniffed-at discount of £7.00 – yes that’s £7.00 – off the cost of your box! All you have to do is click over to Degustabox, place your order and enter the code BLDEG15 at checkout. Then sit back, wait excitedly for your box to arrive and you too can try out some fabulous products at a fraction of the price! How lovely is that?! Enjoy!