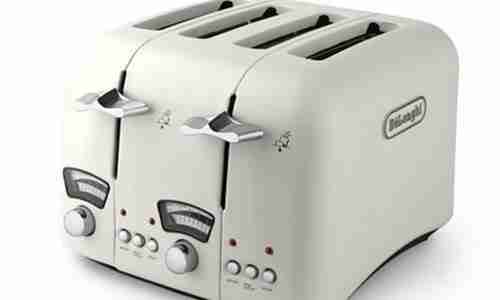 We were recently sent a De’Longhi Classic 4-slice toaster from a range of toasters from House of Fraser to review. Since it was sent to us it seems that it is no longer available online, the range seeming to focus upon other designs from the De’Longhi range as well as a variety of other manufacturers too.

The timing of the toaster’s arrival could not have been better. Our old toaster was on its very last legs indeed. One of the levers did not work well, hence not being able to lock the two slices of bread down into place to allow them to be toasted. The second lever needed a certain knack to be applied to it in order for it to eventually lock. I lacked said knack, leaving me frustrated and turning to the good old-fashioned grill function on the cooker instead.

So yes, great timing for the new toaster but, I need to mention, the old one was the same make. Given that our original De’Longhi was not even that old, I was sceptical as to the longevity of this particular model, despite my relief at not having to try to remember to remove toast from the low-level grill before the burning smell reminded me it was there any longer.

As it is, the toaster possesses a neat, clean design that I love. I like a bit of a retro or classic look when it comes to appliances and this fits into the feel of our kitchen well. As well as the obvious toasting function, this model also allows you to defrost frozen bread and to reheat toast too. We’ve never used the defrosting function so I can’t comment on its performance, but whilst I am not too keen on the reheat function, the children don’t seem to be aware of it at all. Their main concern is whether the crusts are still on the toasts on the days they do decide they like them, or cut off on the days they don’t. Alas and alak, I never seem to get this correct, thus ensuring my ‘World’s Worst Mother’ crown stays gleamed and polished, not unlike the shiny silver levers and buttons on the toaster.

The toaster allows you to insert different thicknesses of bread thanks to it automatically adjusting internally to fit around it and hold it in place – although anything wider than an ordinary thick slice will leave you struggling. One function I did like was that it allowed you to lift the toast higher than other models, proving to be a handy feature when making crumpets or other smaller toasted items that you might otherwise have trouble removing.

The toasting function itself was very effective. We found that setting the dial to somewhere around the centre setting created a sufficiently browned toast. Any higher and you’re looking at a blackened, burnt slice which is all fine and dandy if you enjoy that kind of thing. Alternatively, the lowest settings will allow a gently warmed and everso-slightly rough bread to be removed rather than anything that can be remotely classed as toast. Again, fine and dandy…

Aesthetically, I like it. The design is something I would go for (and did, as my purchase of the original proves), but my reservations lie with the practical longevity of the model. If it’s still going strong with no lever issues in a year I’ll be happy to put the original’s issues down as a one-off. If, however, this also experiences the same problems after a while of use I’ll be inclined to put it down to a design fault instead.

One thought on “We Review: The De’Longhi Classic CT04E 4-Slice Toaster”