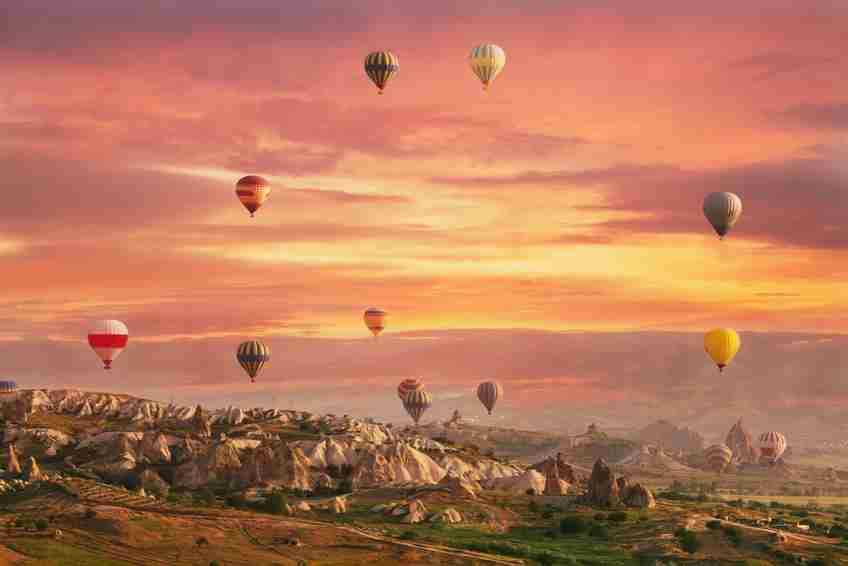 Since our decision to remain where we are property-wise but to travel more leaving our home as a base instead has seen made our bucket list grow at an extortionate rate. If there’s one place we want to go, it’s everywhere.

There are the usual places and sights to see of course; the Statue of Liberty, Sydney Opera House, the Grand Canyon, the Eiffel Tower and even the places closer to home like Stonehenge, the Lake District or the Cotswolds because you never seem to investigate the places on your doorstep, for some reason.

But the world is such a terrific place, so full of culture and diversity that trying to narrow down the places we want to see is proving almost impossible. Condensing it into just five has caused me to edit this post several times already so before I change my mind any more here goes:

Visiting Cappadocia is so high on my list for me that it’s almost out of this world, just like the region itself. This area of Central Anatolia in Turkey is full of history and mystery in one, with nobody really knowing just how old it is. The volcanic formations characterised by hundreds of fairy chimneys hold hundreds of caves penetrating deep below the ground. These areas, a completely hidden underground world, once held in the region of 20,000 people, containing their living quarters, their livestock, food store and worship quarters for months at a time. The scale is huge and the work, skill and intelligence of the people that created these save havens is fascinating to me. Every day in the Cappadocian region of Goreme hundreds of hot air balloons take off creating a spectacular sight. While Mike reckons he’d love to take a balloon ride over the fairy chimneys I think I’d prefer watching from the ground instead! Have I taken leave of my senses, I hear you ask. No. By ‘sporting’ I mean ‘lying on that hammock on that beach by that sea. And maybe swimming in it to cool off on occasion.’ Mike, being a fair-weather golfer (as in, he hasn’t played golf in over 20 years because the weather is so naff in England), could possibly be quite easily persuaded to play a round or two of golf in Bali too. Golf and swimming are both sports, right? So technically, this subheading is fine. After all that exertion in Bali what better way to chill out than bathing in the thermal springs of Pamukkale? This natural site in southwestern Turkey sits on a cliff side almost 200 metres high. The thermal springs emerging from the cliff have resulted in a stunning series of waterfalls and basins caused by the calcite of the water. The result is quite splendid with the area resembling soft white balls of cotton wool, which fittingly is the Turkish translation of the world Pamukalle. The natural properties and the warm, 35ºC heat of the water makes it the perfect place for a spot of pampering. Who wants to join me?

Dancing with the Dubai Fountain Given that my dancing somewhat resembles Kermit the Frog on a narcotics and energy drink cocktail it might be safer for me to simply allow the dancing fountain of Dubai do its thing without me. This is the world’s largest fountain system which is set within the Burj Khalifa lake. As if the Burj Khalifa isn’t enough of a reason to want to go to Dubai as it is, this 275 metre long fountain is fully choreographed and illuminated by 6,600 lights and 25 coloured projectors and shoots water over 150 metres high. As great as YouTube videos are, this would be amazing to watch in real life to say the least.

Sleeping beneath the Northern Lights It isn’t long before Mike and Cait head off for Iceland in the hope of seeing the Northern Lights for themselves. We are all hopeful they will return with some good video footage and great photos but it’s fair to say that the rest of the family are understandably quite keen to experience this phenomenon for themselves too. Ideally, I’d love to be able to go a step further and sleep in a glass igloo overnight. Given my propensity to hibernate as soon as the weather hits 10° –  comparatively balmy to the frozen north – this would be a battle of want versus will but one personal challenge I think will be worth it.