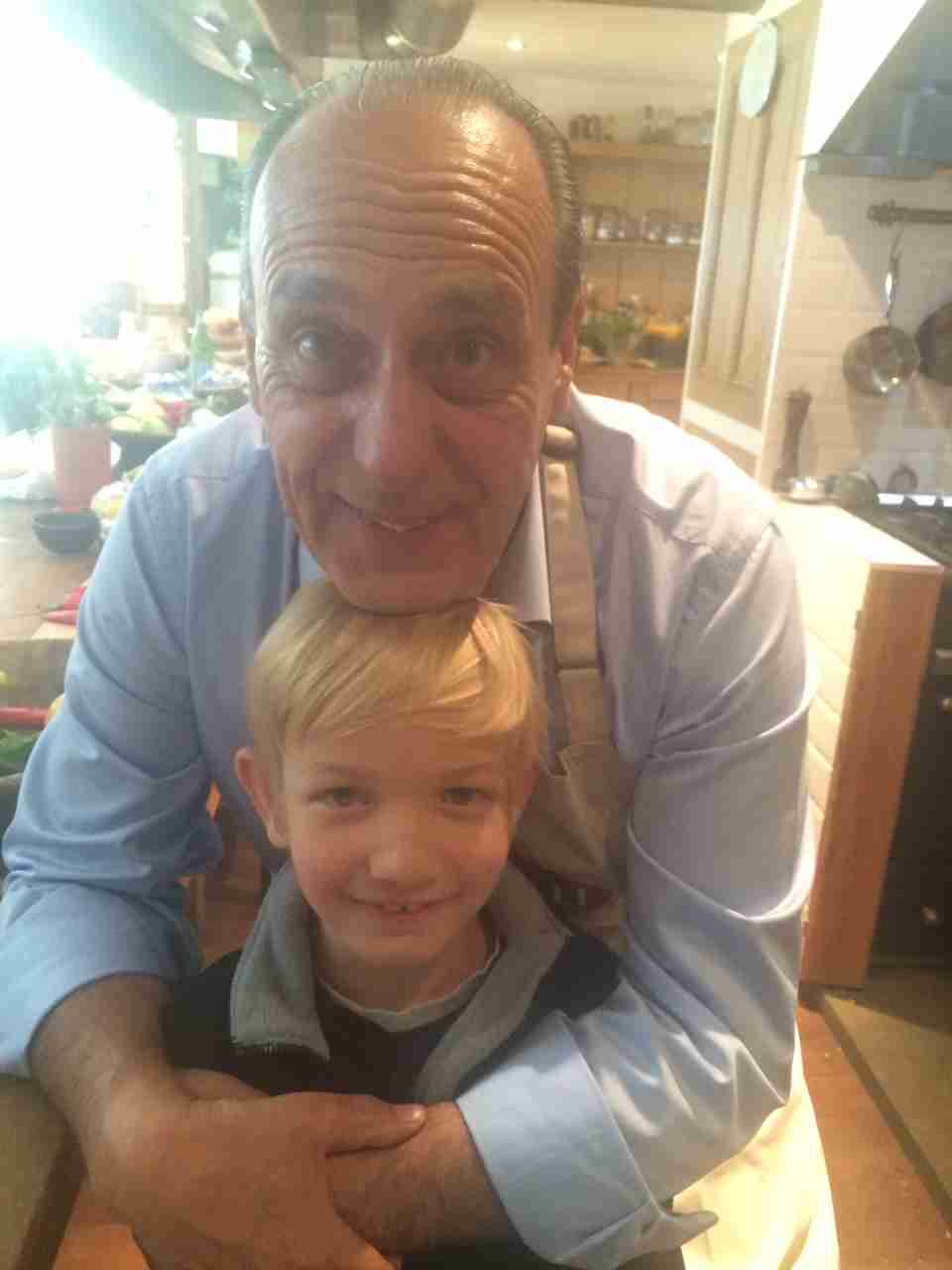 Mike takes over today’s blog as he describes the day Paddy finally met his hero. We hope you enjoy it!

Regular readers will know of Paddy’s interest in cooking. He might only be eight-years-old but this is the child who can make his own pasta and can even gut a fish before making a meal for our whole family out of it.

Unlike most  other children his age, Paddy’s hero is Italian chef Gennaro Contaldo, the chef who taught Jamie Oliver how to cook. He loves to watch his videos on Jamie’s FoodTube and our own Two Greedy Italians DVDs and he often mentions Gennaro in conversation like he did in this video (‘This is like when Gennaro taught Jamie Oliver…’). He was thrilled when Gennaro kindly sent him some personal advice in an interview he did for Larger Family Life and wrote a letter to Gennaro asking if he could meet him – although it was never sent.

So you can imagine how he felt when Bertolli invited us to spend some time learning a few new ways to cook Italian food with top TV chef Gennaro Contaldo himself. Suffice to say he was keen to go.

With his Gennaro cookbook in hand, we made the early morning start to London, Paddy getting more excited the closer we got to town.

After a short cab ride, we reached the Food at 52 cookery school in Islington where we enjoyed some of the fresh canapes made with anchovies, mushrooms and, of course, tomatoes.

Suddenly up from the basement kitchen comes Gennaro and in true Italian style immediately hugs Paddy and calls him his prince! Any thoughts that Paddy may be overwhelmed are soon dismissed as he is made to feel completely at ease and raring to get cooking.

Descending into the very impressive, well equipped country style kitchen, Paddy is given a front row seat next to the cooker and given the job of Gennaro’s assistant.

Gennaro then went on to introduce some of the different types of ingredients he would be using to cook with in his quest to encourage the UK how to ‘show pasta some passion!’.

The cooking begins with a beautiful tagliatelle and mushroom dish quickly followed by a tomato and basil offering, both made using Bertolli with Butter – a delicious new spread from Bertolli which combines the delicious taste of butter with the healthy goodness of olive oil.

…he whips up a pan of ricotta and spinach parcels, and pancetta with peas and farfalle, which are all feasted upon by everybody present, including Paddy who rather impressively has eaten everything placed in front of him.

The time passed by quicker than we would both have liked but with the demonstration having drawn to a close the atmosphere becomes more relaxed. Paddy and I then had the opportunity to chat to Gennaro about his upbringing in Italy, his passion for food, life and his own large family. It was a brilliant experience for us and it was great to see that Gennaro’s persona in real life is exactly like it is on TV; warm, friendly and fun.

Truly inspired to continue with his cooking and armed with his newly-signed book and apron, Paddy was thrilled to have finally met his hero – claiming that he was now like Jamie Oliver having been taught to cook by Gennaro himself. Tired but well-fed, we headed off on our journey home keen to share our day with the rest of the family and Gennaro’s new protégé has memories he will cherish for the rest of his life.

Move over, Jamie. It seems your time is up!

You can find a range of Gennaro’s recipes and more information on Bertolli with Butter over on Bertolli’s website. Which will you try?