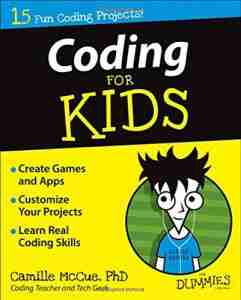 Over the course of the last couple of years our boys have taken a keen interest in coding. With so much revolving around computers nowadays, from banking to games, learning coding basics was something they wanted to learn. Of course, they have yet to design an app (it’s harder than it looks!), but they’re able to code short films and pieces of music.

12-year-old Harry is our resident nerd. For him, memorising the periodic table is a fun activity, and a majority of his books are science-based. When he was five or six he was reading the dictionary (really, he would sit there for hours reading each and every word and their definitions) and often tells us chemistry jokes that we laugh at despite having no idea what comes out of his mouth.

One thing he really loved was Coding for Kids for Dummies by Camille McCue (rrp.£21.99). We were aware of (and love) the ‘Dummies’ books that explain everything in the simplest way possible, and Coding for Kids for Dummies was written in a way that kids could understand. It gives fun exercises, valuable information and explains everything you need to know about coding.

Here’s what Harry had to say about it:

“I think that Coding for Kids For Dummies was very informative, teaching a simple-to-learn coding language, easy projects, but great results. It starts off teaching simple mechanics, such as how to make turtles and buttons, and even how to create your own games, like mini golf or a drawing game! You learn how to make a “Rock, Paper, Scissors,“ simulation, and it teaches conditionals and how to make your own video games.”

As you can tell, he was very enthusiastic about it.

He wasn’t the only one who loved it; Eddie and Sid enjoyed working from it too, while Paddy and Ollie preferred to have it open beside them as though the information would make its way to their brains without them actually having to read it.

Overall everyone who read it found it informative and easy to understand without feeling like it was condescending. The 15 projects are fun and teach skills that many may require in the future, while giving them an opportunity to express themselves creatively in a different way.

If you’d like to purchase Coding for Kids, you can buy one from Amazon here.