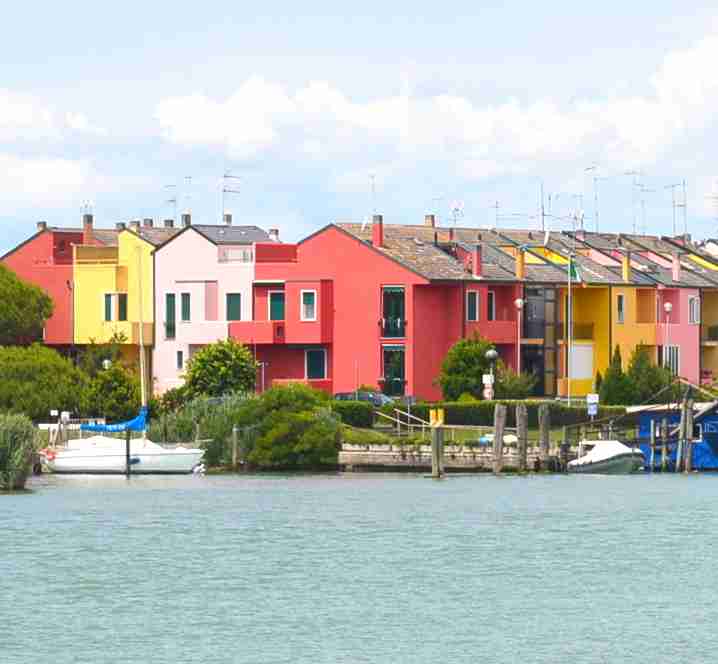 When thinking of Venice we might automatically conjure up images of St Mark’s Square, Doges Palace and gondolas gliding along the famed Grand Canal. But the Province of Venice holds so much more than we might originally imagine.

Sitting along the upper shores of the Adriatic sea and nestling between the mouths of the Livenza and Lemene rivers, Caorle doesn’t just boast its bustling, historical town but also numerous villages dotted within its lagoons and hinterland, making it a location which provides a diverse offering of traditional and modern culture combined.

Caorle’s coastline spans 18km in total. The entire beach is cleanly and welcomingly kept for the ever-increasing visitors which arrive to discover it, its local community knowing that once they do, people will return again and again to enjoy all the area has to offer. Its ever-increasing pull for tourists continues with more than 250 hotels to date. We first decided to venture over to the jetty we saw in the distance. It soon became clear that we underestimated just how far in the distance it actually was but the walk was so pleasurable that we didn’t really mind at all. It was easy to see why Caorle’s beaches have won the European Blue Flag continually since 1992. The skies became bluer as we walked, the sun shining even more brightly as we continued on our way. Before it became a popular tourist destination Caorle was a simple fishing village. Many of its restaurants serve freshly caught produce from its very own waters.

We watched the boats passing one another by as they made their way to the Porto Santa Margherita or out into the calm sea. The houses in Caorle are painted in bright colours in order to distinguish it from other Italian medieval towns. It is possible to take a boat ride to discover the beautiful lagoons that Ernest Hemingway himself fell in love with with the nobel prize winner dedicating several pages to the area in his book Across the River and into the Trees.

Old fishermen’s huts known as casoni line the lagoons. While few are still used for their original purpose many have been preserved so that visitors can see Caorle life as it once was. After making our way to the end of the jetty we decided to retrace our steps back along the beach to find the Shrine of Our Lady of the Angel. This must be one of the most pleasurable coastal walks possible. Not only is there the stunning beauty of the Adriatic sea to savour but the coastline plays host to fabulous outdoor art. In 1992 an artist named Treviso Sergio Longo decided to honour the marine world with a sculpture carved into the rocks. His sculpture of Neptune and a sea nymph became so popular with visitors that Longo and the City of Caorle introduced an artistic international prize. International artists would gather to sculpt their own creations from the classical to the abstract bringing life to the Eugenean trachyte, hence the name ‘Living Rocks’ or Scogliera Viva. The art is truly amazing with such a diverse range of subjects. Continuing its support of the arts Caorle has holds the FluSSidiverSi, a poetry festival which takes place over one weekend each year. Some of the poems are inscribed and placed into the low wall lining the coastal walk. Andrea Zanzotto is one of the poets of the participating Alpa Adria region. Walking along the coast towards the Shrine of Our Lady of the Angels the old town stands to your left. Historical architecture continues to impress as we pass St. Stephen’s Cathedral. Standing over the Piazza Vescovado (Bishop’s Square), it is the oldest monument in Caorle having been built in 1038. Just a little further along the coastline and we finally come to the Shrine of Our Lady of the Angel. It is said to have been originally built in the sixth century and dedicated to the St. Michael the Archangel. The story goes that some fishermen saw a wooden statue of the Virgin Mary supported by a block of marble floating on the sea. Despite the fishermen’s best efforts they were unable to bring it to shore but a group of children, with the innocent touch of their hands, managed to do so instead. It was then that the inhabitants of Caorle decided to dedicate the church to the Virgin Mary also. The story doesn’t end there. In 1727, it is said that a flood hit the village. The height of the waters are indicated by two crosses that the water is said to have risen to. Despite this the shrine remained untouched and not a drop of water entered it. Today the Shrine of Our Lady of the Angel is more often known as the Church of the Virgin Mary. Its location makes it well worth a visit whether you are religious or not, providing a peaceful place to sit and think… …or just to watch the world go by.