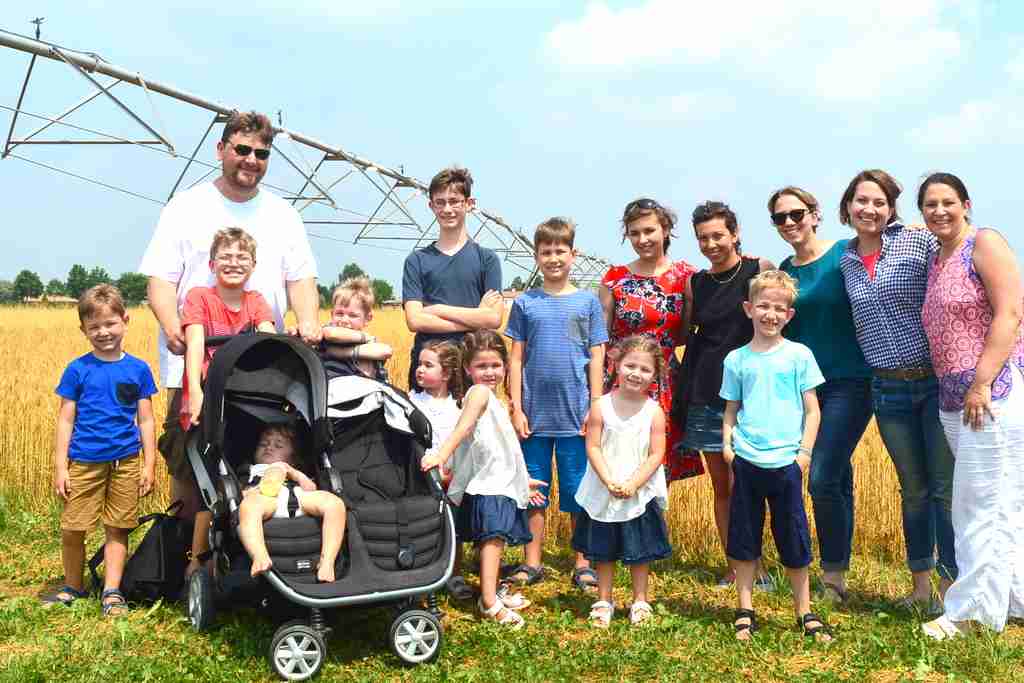 The Barduca family hit us with all three.

The Barducas produce organic salad leaves and herbs to retailers throughout Europe. You may have seen some of their products through sellers such as Abel and Cole and they are now hoping to break into the British market even further. When we were invited to visit their farm to take a look behind the scenes we couldn’t wait. As you may already know we are in the process of selling our home in order to start a smallholding in Ireland. This, we thought, would be the perfect opportunity to find out more about growing produce organically.

Farming for the Barducas goes back many, many years – at least as far as Bio Barduca founder Francesco Barduca’s grandfather. Things are very different now as they were back then, of course. While technology may have made farming easier in many respects, the Barducas have turned their backs on modern-day pest control and chemicals in order to keep their produce as natural and healthy as possible, re-introducing traditional methods that would have been used instead.

Francesco Barduca set up his farm back in 1977 and began selling produce a year later. By 1988 the business had expanded, selling ready-to-eat washed and packaged salad leaves. Now he and Anna, his wife and partner behind the successful business – both of whom are still very much hands on themselves – have an overall staff of twenty including their daughters Alessia and Laura. Francesco and Anna also have a son, Fabio, who is currently at university.

Our family was warmly greeted on arrival by Alessia (in the green shirt below), her sister Laura, parents Anna (in red) and Francesco, family friend Valentina, and Alessia’s wonderful six-year-old son Francesco. It was not even nine thirty in the morning and the heat was already rising well into the 30s, so we appreciated beginning the day with refreshing cold drinks and fresh fruit from their own land.

We were surrounded by a collection of old farming carts which Francesco likes to restore and display.

Something already told us that this is a man who likes to keep busy!

Francesco and Anna soon had to leave us in order to continue their work but we would meet up with them again later in the day. Meanwhile, we were well looked after by Alessia, Laura and Valentina who began our tour of the business.

During his early years of farming Francesco realised the harm that pesticides could cause after accidentally splashing his skin with them. Questioning why something so harmful outside the body would not cause harm when ingested, he vowed against using chemicals on any of his produce ever again. Since then everything they have grown has been completely organic and chemical-free.

Year round production of crops which include lettuce, rocket salad, radicchietto, carrots, chicory, spinach and parsley are grown in 2 acres of greenhouses and 50 acres of land.

Ground is prepared by removing grass seeds and weeds by the traditional method of burning the top layer of soil.

Modern day farming machines make this task less laborious as it would have conventionally been.

As only the top few centimetres are burnt the soil beneath remains in good condition, making it now perfect for planting seeds.

Pests are naturally controlled by companion planting. Plants such as sage are used in the borders to encourage the good bugs which will then eat the bad bugs. Also, as the growing period for the leaves is only twenty days it doesn’t give much opportunity for them to be attacked and eaten. This short growing period not only keeps the leaves nutritious and tender at the time of picking but also prevents any great loss through infestations occurring, negating the need of chemicals and pesticides.

Each area of production is treated in the same organic way.

The family’s dedication to producing safe, nutritious food is consistently ongoing and while that isn’t enough to love about their ethics in itself, we were bowled over by their close family bonds. We loved how the Barducas not only worked together in their own business, but also worked closely with other family members in theirs. The corn field you can see opposite their greenhouses is their cousin’s.

This corn will be sold as cattle food. How beautiful is nature?

In order to keep their crops as close to nature as possible the Barducas have created a rainwater harvester. The photo doesn’t do it justice but take our word for it, it’s huge!

From seeing where and how the produce was grown it was time to go and see how it was prepared and packaged. Keeping the picked produce as fresh as possible requires it to be kept at cool temperatures. This meant everyone donning jumpers and jackets before entering the preparation and packaging areas.

Once we were wrapped up (despite the thirty-something degree heat outside), we needed to add lightweight gowns and hats. We were about to enter a food preparation area after all.

As we walked into the food preparation area it took a while to adjust to the noise from the machinery. It was loud!

All staff who work in these areas undergo rigorous training on a regular basis. They are kept up to date with the company’s performance and required to adhere to personal grooming and workplace sanitisation techniques which ensure the preparation area is kept in the most hygienic condition possible.

The Barducas take quality control extremely seriously and endeavour to only provide the best products in terms of freshness, taste and quality alike. Freshly picked products are brought into the on site facility where they are quality checked. If something doesn’t reach the high standards they require, it doesn’t get any further.

The produce which does make the grade will then begin its preparation process.

There are two separate washing systems, each of which is designed to gently yet throughly wash different types of produce according to their needs. Both incorporate a three-tier washing system meaning all the produce is washed three times, each in a separate area of water.

Once washed the produce needs to be dried. Until fairly recently all producers would dry their produce in an industrial version of a kitchen salad spinner. This would result in the tender leaves becoming damaged and bruised and so, keen to prevent damage occuring to the delicate products, Francesco tried to find a way to effectively dry the fragile leaves without causing them harm. This eventually resulted in him inventing the heater which is now used not only on their farm, but is now patented by Barduca SRL and used by other producers too.

The washed and dried produce then continues on its journey with packing coming next.

The amount of plastic that is used for packing the Barduca range of products has already been reduced by 12%.

The family’s commitment to reducing their environmental footprint as much as possible continues and they have plans to eventually use natural, fully biodegradable and organic packaging made from corn in the future.

Each pack of produce is independently weighed as it travels through the packing process.

Once weighed it is then packed.

There are two floors to the unit.

Each of the floors follows the same process, doing the same jobs in exactly the same way.

The freshly picked, washed, dried and packaged produce is now ready for distribution.

The packaged produce will be kept at the optimum temperature for freshness until they reach retailers throughout Europe.

We ended our visit feeling all the more knowledgable about where our food comes from and a great deal more appreciative of the hard work that goes into producing it. Having the opportunity to experience the process behind the product left us feeling amazed at how much we took them, and the work involved, for granted.

You would think that with a successful business that has environmental ethics and family ties at its heart, a couple of fabulous inventions and a hobby refurbishing old carts, Francesco, Anna and the rest of family might want to relax a little, right?

It seems that they love what they do so much that farming is a hobby as well as a job. Laura has not only ventured into bee-keeping but she has also decided to grow fruit trees too. Not just any fruit trees. Her aim is to try and re-introduce traditional varieties that are no longer in common circulation.

Laura’s enthusiasm is fabulously infectious and we were as thrilled as she was to see her experiment working so far!

And that’s not all.

In 2007 the Barducas bought this field. It took five years for the land to reach organic status.

…so visitors can stay and see how they work for themselves. How wonderful!

When we first began arranging these visits to producers it was nothing more than business. We knew we would have the opportunity to learn new things and be fortunate enough to gain experiences and memories that many people don’t have the chance to. We didn’t expect to make new friends and certainly not ones such as these.

All they say, all they do and all they believe in is with consideration, kindness, humility and thought. Their belief in what they do is strong, their work ethic is unshakable, and the love and enthusiasm which drives all they do is positively infectious. Add their strong family bonds and love for each other into the mix and you cannot help but leave feeling uplifted and positive about well, everything!

The Barducas will be at this year’s Bellavita Expo representing their brand and trying to get more retailers on board. We wish them every success in any and everything they want to do and we think, with their determination and work ethic, they’ll do it all!

If you enjoyed reading about their farm don’t forget that you can also watch our short video below. Our visit also caught the attention of the Italian newspapers – read more about that here.

8 thoughts on “Behind the Scenes: Bio Barduca Organic Salad”