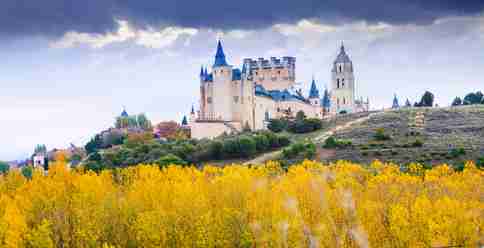 Boasting a wonderful diversity from north to south, west to east, Europe holds many jewels within its geographical boundary, many of which are a terrific treat to behold.

Love fairy tales? These locations will make you feel as though you have stepped right into a storybook. With so many Europe tour packages to choose from, why not put these eight fabulous places on your list? Prague Castle has dominated over the Hradčany district of the city since the 9th Century. The largest castle complex at almost 70,000m², it easily dwarfs the rest of the city buildings without effort. Open daily year round, visitors can also watch the Ceremonial Changing of the Guard on the hour. Unspoilt and stunning, Portofino has become a popular destination on the Italian Riviera. Situated in Liguria it remains a fishing village as it always was, though now you may now spot the odd celeb or two in the area! Colmar is situated in the Alsace region of France with Switzerland and Germany nearby. Its historical centre has been devotedly preserved, with 17th and 18th century half-timbered houses and colourful houses alongside Little Venice, it is quite reminiscent of the town in Disney’s Beauty and the Beast. The birthplace of Denmark’s most famous storyteller, Hans Christian Andersen, it is easy to see how Funen will have inspired such enchanting tales. Known as Denmark’s garden island, Funen is situated between mainland Denmark and the island of Zealand. With no end of castles, fairytale cottages and the enchanting town of Odensk, Funen is certainly a fairytale-lover’s dream. Utterly breathtaking, this simply has to be one of the most beautiful castles in existence. Standing at approximately 65 metres tall, it sits proudly atop a hill towering above the village of Hohenschwangau in Bavaria. Neuschwanstein’s fairytale style was not lost on Walt Disney who based Cinderella’s castle upon it.

Another inspiration for Disney’s Cinderella castle is Alcazar Castle in Segovia, Spain. Originally built as an Arab fort, the castle has since served many purposes from palace to prison. Thought to be over 900-years-old it was restored after a fire caused severe damage in the late 1800s. It is now open as a museum, welcoming guests from far and wide. Cinque Terre, or Five Lands as its name translates, once again sits within Liguria on the Italian Riviera. Its name comes from the five villages which makes it up: Monterosso, Vernazza, Manarola, Corniglia, and Riomaggiore. Protected as a UNESCO World Heritage site, it is difficult to access by car and even internet was refused until very recently! The Mont Saint-Michel is an island commune which sits 600 metres from the north-west shores of France. Another UNESCO World Heritage Site, it was the inspiration for yet another Disney castle, this time in Disney’s Tangled.

Which of these would you love to visit? Leave a message and let us know!

5 thoughts on “8 Storybook Places to See in Europe”