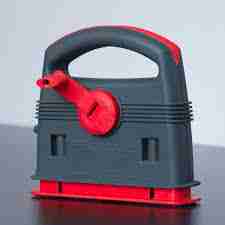 With all the renovations going on in our house at the moment, we’ve unearthed a lot of pictures, canvases and mirrors that we would like on show. The problem we found isn’t finding knickknacks to put on the walls, but rather going about putting them up without ruining our brand new tiles and freshly decorated walls.

The Hardwall Takker solved this. It is the simplest way to hang any object weighing up to 12 kilos, requiring no equipment other than what is included. All the required tacks are stored away in the handle meaning you don’t have to waste valuable space in drawers or toolboxes. You can also purchase refill packs of tacks and Takker hooks.

At first we were a little bit sceptical and Mike – a joiner by trade – watched the video and promptly declared how it wouldn’t work. When we received it we tried it out on some old tiles first, reasoning that if the Hardwall Takker ruined them we would only be taking them down anyway. It turned out that it really did do what it is supposed to quite effortlessly indeed. It drilled one simple, neat hole in the tile, leaving no cracks and minimal – if any – mess at all. We have since found it handy on to use it on our new tiles in the kitchen, using it to drill holes for shelves and accessories.

It isn’t just for tiles though, as it also works on bricks, concrete, mortar, and plasterboard, inside or outdoors. Even Mike had to concede that he was impressed. His only qualm was that the holes were a little too small, but discovered (and this too was tested out on the old tiles first to ensure it worked), that if he first created a hole with the Hardwall Takker and then drilled into it with a larger drill bit, he could enlarge the hole effectively and cleanly.

Safety isn’t an issue, as it is fully retracted when it is not in use, meaning you don’t have to worry about leaving it lying around the house. This is a bonus for anyone with kids as you no longer have to be constantly looking around to make sure they aren’t playing with a tool which could cause an accident.

On its own, the Hardwall Takker can be used to hang items weighing up to 12kgs/27lbs yet is amazingly light at under 400g. Selling at under £25 this is a convenient tool to add to your DIY kit that does what it claims to and won’t break the bank.

You can buy your own Hardwall Takker directly from the Takker website here or from Amazon.

In the meantime, see how practical yet user-friendly it is here: