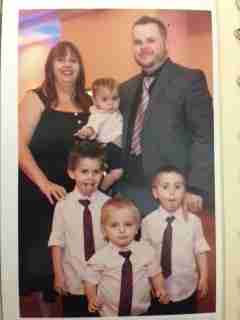 Parenting brings its fair share of worry but this week’s Large Family of the Week have experienced more than most. Meet the Crawfords from Wiltshire, who share the ups and downs with us…

Introduce us to your family:

Me! Nicola, 37.  Daddy is Derren, 33.  Then there is Stefan, 6.  Benjamin, 5.  Kristian 4 and Logan 3.  Derren and I have been married 8 years in April.  We met at work (Little Chef and Burger King managers), in 2002.  Stefan came along the year after we got married.  Then when he was 12 weeks I fell pregnant with Ben.  I developed gestational diabetes for the second time and got quite poorly!  When I was 32 weeks, we lost our home.  We had to live in B&B with a 10 month old and a growing bump!

At 38 weeks I was told ben had stopped growing.  I was induced the next day and he was a tiny 4lb 5!  There are 11 months between my biggest 2!  They love being the same age for a few weeks.  Luckily we were housed when Ben was a few weeks old!.

On Ben’s 1st birthday I fell pregnant with Kristian (kiwi).  Again I got gestational diabetes.  I was told at 31 weeks, not to get pregnant again!  Kiwi had stopped growing and my diabetes had gone loopy so he was delivered by c section at 32 weeks.  He spent 19 days in nicu and came home quite strong.  He developed reflux and at 6 weeks was re-admitted with bronchilitis and severe aponeas.  After a week on the ward he was let home with lots of meds.  I was a little scared!

Derren booked his vasectomy for July 7th.  A few weeks before, a now 6 month old Kiwi contracted viral meningitis.  He spent a week on a drip and I started to take antibiotics while in with him.  These messed with my pill :\.  Derren went for the snip and the day after when he was nursing his sore man parts, I was nursing the toilet!  I told him I thought I was pregnant and he laughed!.  The following week I tested, it was positive!

I made an appointment at the doctor’s!  I was a little scared to say the least!  She said we wouldn’t know if it would go wrong until it got to the third trimester.  I went ahead, apprehensive and very scared.  Logan stopped growing too 🙁  gestational diabetes got to him too!  Logan was delivered (vaginally) at 34 weeks, but only weighing a tiny 3lb 12!.  He was let home at 7 days old, back at birth weight and very healthy!  Unfortunately he developed a cold a 3 weeks.  I could also see he was starting to suffer reflux.  I spoke with the health visitor on Monday 14th march and she agreed.  Tuesday the 15th I took him shopping after the school run.  We were sat having breakfast when he turned purple.  I phoned the doc who said yes it was reflux and bring him in for 1140.  That was perfect, it was 10am and we needed to pick the eldest up at 12!  We finished shopping and headed to the docs.  There were no parking spaces and logan was due a feed.  Derren dropped us off and said he would pick Stefan up and meet us there.

We were 20 mins early so I booked him in and sat down.  Put his car seat down and turned to get his bottle.  As I turned back I noticed he was grey, his eyes had rolled, his veins all stood on end and his tongue was grey.  I ripped him from his car seat and ran to reception.  I threw him on the counter and shouted ‘help, my babies dead!’. We ran down to the drs offices and I was just screaming, a doctor came and took him from me and I was put in another room.  It took 5 minutes to bring him back.  The ambulance took 20 minutes!  The helicopter was overhead but had nowhere to land.  We spent 8 hours in resus.  Then they said they couldn’t do any more and he needed to be intubated.  He went to theater and then we were shipped to Southampton’s picu. Logan spent 4 days on ventilator.  I thought I had lost him!  He came home but was a time bomb!  After another arrest we were given an aponea alarm.  It went off constantly.  This carried on for 6 months!  All because of reflux!  I would love to get the word out about how dangerous reflux can be!  I even set up a page about reflux on Facebook!  It only has 237 followers lol and is very quiet.

Logan is now a very cheeky and extremely intelligent 3 year old.  I can’t help being scared though because on Saturday it’s the 3 year anniversary!

I could go on but I’ll bore you with it all lol.

Do you consider your family to be large? If not, what do you think is the magic number which turns an average sized family into a large one?

Yes I think we are!  So do other people when we get comments like ‘ooh you’ve got your hands full’

Did you ever think you would have a large family?

What is your best moneysaving tip?

Um……… still learning that one!

What is your best tip for organisation?

Routine!  I have to have my routine!

What is your favourite recipe?

Chilli in the slow cooker

Do you cook the same meal for everyone or cater for different tastes?

Only with fajitas!  The boys have slightly less spicy.

What is the best thing about having a large family?

And what is the most difficult?

If you could offer one piece of advice to parents, what would it be?

Take each day as it comes and have fun!  Don’t rush life!

Don’t you have a television?

Do you know what causes it?

And finally, will you have any more children?!

2 thoughts on “Large Family of the Week: The Crawford Family!”