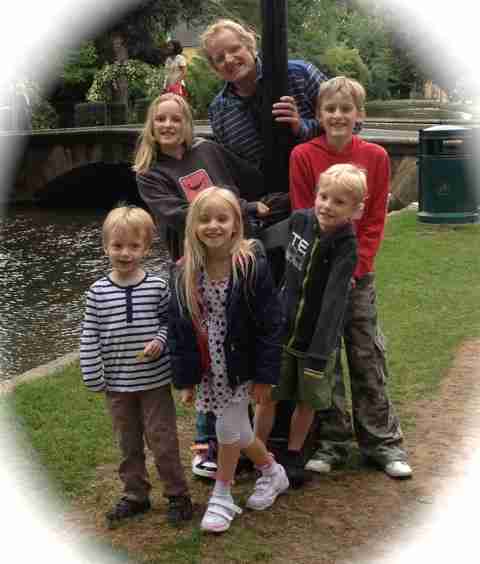 This week we introduce the Willmore family from Hertfordshire, England. Mum Afra shares her thoughts on raising her family of seven children with husband Ray.

Introduce us to your family (names and ages & tell us a bit about yourselves):

Me – Afra – aka madmumof7. DH is Ray, 51. We met when I was a journalist and he was working with a PR company working with hot air balloons. Been married 21 years.

Children aged 5-19. All individuals, all bonkers in their own way.

Do you consider your family to be large? If not, what do you think is the magic number which turns an average sized family into a large one?

It’s large by British standards but not particularly in other countries and cultures. Unfortunately unlike other cultures British people seem to be encouraged to sneer at larger families and make negative assumptions about us. I think 5 children turns a family into a large family but when I had “just” 4 that seemed large too!

Did you ever think you would have a large family?

Not this large. We thought maybe 3 or 4.

What is your best moneysaving tip?

Cook from scratch wherever possible.

What is your best tip for organisation?

Haha. You wouldn’t ask that if you could see my house. I live and die by my smart phone. Otherwise I’d never know whose parent’s evening or play I was meant to be and or when.

What is your favourite recipe?

Sticky chicken – one meal they will all eat. Chicken pieces, honey, sliced lemon, soy sauce (just a dribble), garlic bulb halved, dash of oil, dash of hot water, bake in oven and serve with creamy mash and veg of choice.

Do you cook the same meal for everyone or cater for different tastes?

Mainly I cook one meal but adapt it. We have lots of roast dinners with mash and roast potatoes, 3 or 4 different veg according to taste and always have yorkshire puds and stuffing- cheap fillers to make up for small portions of meat.

What is the best thing about having a large family?

Children always have a friend to play with or talk to, and there’s so much love in our house demonstrated through in-jokes, hugs and kisses and caring acts. It makes my heart melt! Not to say they don’t fall out sometimes but on the whole they do get on very well.

And what is the most difficult?

Feeling guilty about lack of money. Wondering if just two would have had a better life. But then we remember that great holidays abroad and “stuff” doesn’t necessarily equate to a better life.

When they were younger it was physically hard but I’m over the worst of that now.

If you could offer one piece of advice to parents, what would it be?

Go with your gut. Don’t worry about what other people are doing or when milestones should be reached. Do what’s right for your family. Put down the parenting book and just look at your kids – only you really know them.

Don’t you have a television?

Do you know what causes it?

And finally, will you have any more children?!

I miscarried at 3 months two years ago and I’m still so so sad about losing number 8 who would have been our last. We hoped and prayed for a menopause miracle but the HRT patch on my bum says no, probably no more children. But maybe grandchildren soon-ish………

Read more about Afra and her family over at her blog Mad Mom of 7 – Living it Large. In the meantime, why not say hello in the comments below?

2 thoughts on “Large Family of the Week – The Willmore Family!”