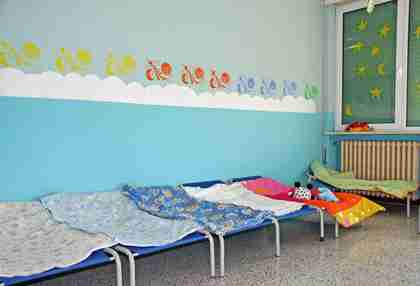 Yesterday we wrote how Baroness Sally Morgan, Defra Chief and advisor for the charity ARK (Absolute Return for Kids), pushed for schools to provide a formal education for 2-year-olds. Many people feel that this is unnecessary, possibly damaging, and yet another attempt to chip away at the family unit.


Spare a thought for the three-year-olds who wave their parents goodbye at the beginning of the week – except they won’t be collected later on that day. For them, home-time is four days later.

Children as young as three spend Monday to Fridays in the boarding kindergartens of China – sleeping, eating, learning and playing in classrooms attached to dormitories, seeing their parents at weekends only.

There are no official figures as to how many of these boarding nurseries there now are but, after their introduction in 1949, it is thought that they now exist in their thousands.

Xu Jing, executive principal of the Kangqiao kindergarten affiliated to the China Welfare Institute (CWI) in Shanghai says: “Some think it’s good for the children because it helps promote independence. Other parents don’t have time or energy to look after their kids.”

Demanding compulsory schooling for two-year-olds is one thing but this begs the question: where would it end? Is it a good idea – a valuable solution to problematic childcare issues? Or is it government intervention going a step too far? What do you think?

4 thoughts on “Boarding schools for 3-year-olds. Would you?”