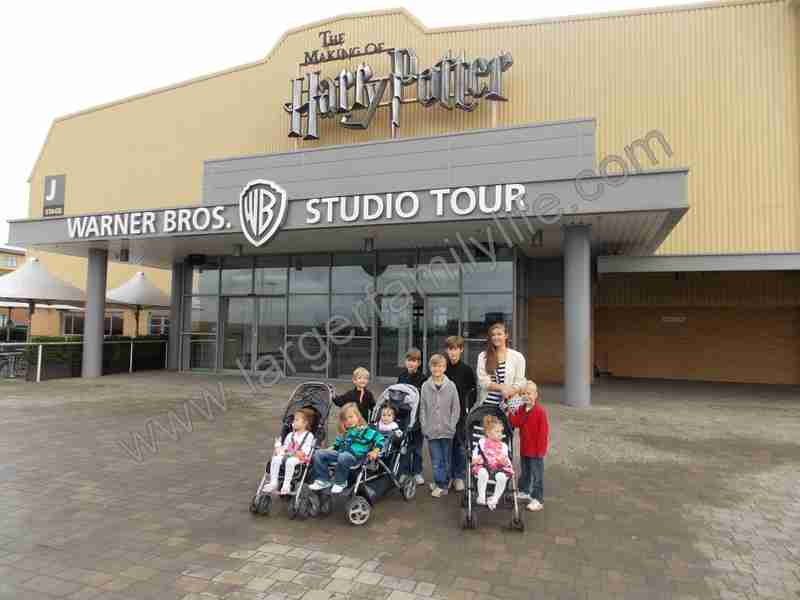 I’ve been a fan of Harry Potter for years. I took out the first book from the library expecting it to be nothing special and just wanting to see what all the fuss was about. I was in no hurry to read it, and because I hadn’t seen any of the films for years, I didn’t take out any of the others.

I instantly became hooked and had finished the book (The Philosopher’s Stone) by the evening of the next night.

After taking out the other six books and reading through them all, I decided to take them out again. After all, it had been a while (probably only about a month or so in reality) since I’d read the first one, what was the harm in re-reading it to get a better feel of the story? It was as though I was reading them for the first time: I then became completely and utterly besotted with the series, and when I made a Christmas list, ‘Harry Potter books/films’ was right at the top.

You can imagine my reaction when I opened up two bundles on Christmas and there were my very own set of books and movies.

I forced the others to read them, declaring them ‘The best. Books. EVER!’ and they quickly became as addicted as I had.

I spent the next few years reading and watching Harry Potter diligently, over and over. When Warner Brothers announced that they were opening the studios to the public, I immediately asked my parents if we could go. Unfortunately for us to all go it would have cost way more than out budget allowed and it wouldn’t have been as fun to go with only one or two of us. So I was back to losing myself in the books, hoping someday we’d be able to go to see the magic as it was created.

One night we were sitting around the table eating dinner together as we always do, when my parent’s began a conversation that caught our attention.

‘Shall we tell them then?’ Dad asked my mum.

‘So… who can tell me who has a lightning shaped scar on his head?’ This question was answered by rounds of ‘Harry Potter!’ from everyone around the table.

‘Who would like to go and see the place where they filmed Harry Potter?’

These were all the various replies issued by us as the words sunk in.

‘We’ve been invited to go to the studios. Would you like to?’ Again, the reaction to Dad’s obvious question was a chorus of ‘Yay!’ and ‘Yes! I want to!’ from around the room.

My parents went on to explain in more detail, such as the date, time, what we’d be able to do there and so on. The countdown then began. Only two more weeks to go!

Two weeks passed quickly, until the night before we were constantly talking about it. We were prepared, with all necessary pieces of paper and changing bags at the ready. Cameras were charged, packed, and then checked multiple times to be sure they really were charged and packed. We had to be up early the next morning in order to be on the road in good time, so all of the things we thought would lose us time were handled the night before.

The day arrived and we all loaded into the bus for a day of, quite literally, magic. After a short journey, we arrived. After going to the information desk to grab our tickets from the extremely polite staff, we were ready to begin our tour.

‘Wow.’ We were all amazed at the sight, and we were still in the lobby. With photos of the cast in costume along the upper walls, a flying car in one corner and the cupboard under the stairs in another, you could do nothing but stare in wonder. If this is what we were like in the lobby imagine what we were like when we reached the Great Hall!

Seeing the Great Hall was possibly one of my favourite bits. It’s right near the beginning of the tour, and yet it holds so much. From two house tables set up at the sides, to the teacher’s table at the top and various costumes around the room that were actually worn by the cast, there was no end to the excitement.

Moving into one of the studios we saw everything from wigs to sets to costumes to how the Quidditch players were made to look as though they’re flying. Hagrid’s Hut, the Burrow’s kitchen, and the Ministry of Magic are just a few of the sets you were able to see. Richard Harris’ Dumbledore wig could be seen, as well as the very one worn by Helena Bonham Carter for her character Bellatrix.

After a quick break for lunch (which included Butterbeer. That was quite possibly the best drink I’ve ever had, and I’d live off it if I was able to) and photo around the Knight Bus, we carry on into the second studio. This one is more models, animatronics and explaining how they created them. There were no lack of models, because you could see the models of people such as Harry, Hermione, Dumbledore, Hagrid, Dobby, and others, and then the animatronics like the Monster Book of Monsters and a miniature Whomping Willow.

Diagon Alley is next. This part is truly magical, from the shops along the side to the wanted posters above the entrance way. It is exactly as it looks in the films, with Olivanders, Weasleys’ Wizards Wheezes and Gringotts being my main favourites.

Then you come to a room that is adorned with sketches and plans. Everything is so precise, and you suddenly get an overwhelming feeling towards the people who have spent weeks developing these ideas to get them as perfect as possible. It’s just amazing. But no matter how cool these white card models were, they had nothing on what came next.

We saw the real life model of Hogwarts that was used. It was so huge and outstanding that you couldn’t do anything but stare. It really took your breath away. Words can’t even explain the thrill that you feel, standing there, seeing it. It is every Harry Potter fan’s dream come true.

After passing through a room with thousands of wands used by the cast and crew, you end up in the gift shop which signifies the end of the tour.

Going on the tour, being the big fan of Harry Potter that I am, was absolutely brilliant. It felt as though I was one of the luckiest people at that moment, being able to see how it was made. It’s not a trip you will be able to do regularly due to the admission prices, especially for a large family, but is definitely a worthwhile treat and one not to be missed if you can possibly make it.

The sets are all amazing and the staff were all warm and welcoming; you can tell that each member loves to be working there. I know I will never be able to forget this experience and that it will definitely be one I tell my grandkids as I give them a set of Harry Potter books the moment they can read.